Trump versus Biden versus China

His first day in office, Trump handed China a giant victory by nixing the Trans-Pacific Partnership, a trade deal we’d expressly created to blunt China’s clout. Yet Republicans call President Biden “soft on China.” The truth is the opposite.

Building a Talent Pool in a Tight Mar…
Blackjack for Beginners: A Short Guid…
A’ Design 2021—2022 Early Call for En…
Why Bitcoin Crashed – Is it Safe to I…
How Does the Fortinet Firewall Work?

We have two main global antagonists. Russia has been called a Third World country with missiles (which it cannot use). It’s a mischief maker, including its election subversion, but is no existential threat.

China is far more powerful and, in ways, more threatening. China does want to take us down a notch, to swagger as the world’s kingpin. That doesn’t require destroying America; and unlike in the Cold War, it’s not an ideological triumph China seeks. While Biden is right to see a contest between authoritarianism and democracy, it’s more like a popularity contest. Our aim being to showcase a better model. Shouldn’t be hard — while a collectivist mentality makes most Chinese accept a repressive surveillance society, that’s not real attractive elsewhere.

China’s real challenge is not ideological but economic Competition. But all nations compete with one another. Just as all businesses, globally and within a nation, compete. And because competition drives prices down to the costs of production, the lion’s share of the wealth that’s created benefits not businesses but consumers. This is not merely theoretical, it’s why average living standards worldwide rose dramatically in recent decades and poverty (contrary to what many imagine) plummeted.

Of course this requires true, fair, unfettered competition, hard to attain because so many interests vie against it. But we’ve succeeded to a degree perhaps surprising. And that battle must be waged with China. 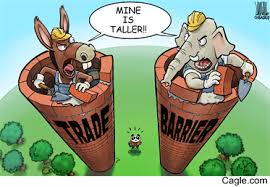 Trump’s tariffs, instead of promoting fair open competition, impeded it, making it harder and costlier for goods to get to market. This may have “protected” some U.S. businesses and jobs from Chinese competition, but damaged the U.S. economy as a whole — the costs borne by American consumers, who pay more for their purchases. Reducing their ability to buy other things, which would have stimulated our economy and created jobs, offsetting those lost to foreign competition. And while both sides suffer thusly from the tariff war, most economists reckon America’s damage exceeds China’s.

Exemplified by his assault on Huawei, Trump also sought to decouple from China, severing the global economy into two ghettoes, ours and theirs. China is doing likewise. Unwinding the globalized supply chains that integrate commerce and maximize efficiency by enabling businesses to obtain the best and least costly inputs. That economic vandalism can only hurt everyone.

Sadly, instead of casting us as the champion of an open global economy, Biden too is trying to wall off ours from theirs. And he’s sticking with Trump’s tariffs. Biden does understand Trump’s stupidity in picking fights with allies, rather than building a common front vis-a-vis China. But that’s undermined by a narrow fixation on American jobs — signaling our friends that they’re actually on their own. Yet seemingly giving them a “with us or against us” choice. Though joining our decoupling from China is self-harming.

Biden seems to frame this as a battle only one side can win. But we cannot “defeat” China. We should instead aim for win-win. That wouldn’t mean not fighting China on intellectual property, human rights, territorial aggression, cyber-hacking, and so forth. We can have those arguments while still expanding mutually beneficial trade and without actually being enemies. You have fights with your spouse but still have intercourse.

This post first appeared on The Rational Optimist | Frank S. Robinson's Blog On Life, Society, Politics, And Philosophy, please read the originial post: here
People also like
Building a Talent Pool in a Tight Market
Blackjack for Beginners: A Short Guide
A’ Design 2021—2022 Early Call for Entries
Why Bitcoin Crashed – Is it Safe to Invest In Bitcoin In 2021?
How Does the Fortinet Firewall Work?
A Furry’s Guide to Cryptocurrency

Trump versus Biden versus China