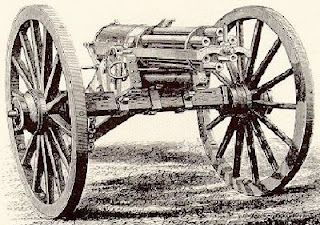 This list takes a look at some important and well intentioned inventions that eventually ended up causing catastrophe through environmental damage or loss of life. All of the inventors were honest scientists who were trying to improve the world, but unfortunately ended up doing quite the opposite. This list is in no particular order.

10) Zyklon B
Fritz Haber was a Nobel Prize winning Jewish scientist who created cheap nitrogen fertilizer and also made chemical weapons for the German side in World War I. It was his creation of an insecticide mainly used as a fumigant in grain stores that was responsible for the deaths of an estimated 1.2 million people. His Zyklon B became the preferred method of execution in gas chambers during the Holocaust.

9) Agent Orange
Arthur Galston developed a chemical that would speed the growth of soybeans and allow them to be grown in areas with a short season. Unfortunately in high concentrations it would defoliate them and it was made into a herbicide even though Galston had grave concerns about its effects on humans. It was supplied to the US government in orange striped barrels and 77 million litres of Agent Orange were sprayed on Vietnam causing 400000 deaths and disabilities with another 500000 birth defects.

8) Gatling Gun
Richard Jordan Gatling invented the Gatling gun after he noticed the majority of dead from the American Civil War died of illness, rather than gunshots. In 1877, he wrote: “It occurred to me that if I could invent a machine – a gun – which could by its rapidity of fire, enable one man to do as much battle duty as a hundred, that it would, to a large extent supersede the necessity of large armies, and consequently, exposure to battle and disease would be greatly diminished.” The Gatling gun was used most successfully to expand European colonial empires by ruthlessly mowing down native tribesmen armed with primitive weapons.

7) TNT
Joseph Wilbrand was a German chemist who discovered trinitrotoluene in 1863 for use as a yellow dye. It wasn’t until 1902 that the devastating power of TNT as it is better known was fully realized and it was adopted as an explosive in time for extensive use by both sides in World War I, World War II. It is still in military use today.

6) Leaded Petrol
Thomas Midgley discovered the CFC Freon as a safe refrigerant to replace the highly toxic refrigerants such as ammonia in common use. This resulted in extensive damage to the Ozone Layer. His other famous idea was to add tetraethyl lead to gasoline to prevent “knocking” thus causing worldwide health issues and deaths from lead poisoning. He is considered to be the man that – “had more impact on the atmosphere than any other single organism in Earth’s history.”

5) Sarin Gas
Dr. Gerhard Schrader was a German chemist specializing in the discovery of new insecticides, hoping to make progress in the fight against hunger in the world. However, Dr. Schrader is best known for his accidental discovery of nerve agents such as sarin and tabun, and for this he is sometimes called the “father of the nerve agents”.

4) Nuclear Fusion
Sir Marcus Laurence Elwin Oliphant was the first to discover heavy hydrogen nuclei could be made to react with each other . This fusion reaction is the basis of a hydrogen bomb. Ten years later, American scientist Edward Teller would press to use Oliphant’s discovery in order to build one. However, Oliphant did not foresee this – “We had no idea whatever that this would one day be applied to make hydrogen bombs. Our curiosity was just curiosity about the structure of the nucleus of the atom”.

3) Rockets
Despite a lifelong passion for astronomy and a dream that rockets could be used to explore space, Wernher von Braun’s talents were used to produce the Nazi V2 rocket which killed 7,250 military personnel and civilians and an estimated 20,000 slave laborers during construction. Later in the US he developed a series of ICBM rockets capable of transporting multiple nuclear warheads around the globe before redeeming his reputation with the Saturn V rocket that put men on the moon.

2) Concentration Camps
Frederick Roberts, 1st Earl Roberts set up “refugee camps” to provide refuge for civilian families who had been forced to abandon their homes for one or other reason related to the Boer War. However, when Lord Kitchener succeeded Roberts as commander-in-chief in South Africa in 1900, the British Army introduced new tactics in an attempt to break the guerrilla campaign and the influx of civilians grew dramatically as a result. Kitchener initiated plans to- “flush out guerrillas in a series of systematic drives, organized like a sporting shoot, with success defined in a weekly ‘bag’ of killed, captured and wounded, and to sweep the country bare of everything that could give sustenance to the guerrillas, including women and children.” Of the 28,000 Boer men captured as prisoners of war, 25,630 were sent overseas. The vast majority of Boers remaining in the local camps were women and children. Over 26,000 women and children were to perish in these concentration camps.

1) Ecstasy
Anton Köllisch developed 3,4-methylenedioxymethamphetamine as a by-product of research for a drug to combat abnormal bleeding. It was largely ignored for 70 years until it became popular in the dance clubs of the early 80s. It was only when the Rave culture of the late 80s adopted Ecstasy as its drug of choice that MDMA became one of the top four illegal drugs in use killing an estimated 50 people a year in the UK alone. Its inventor died in World War I.