While a Shotgun in and of itself is an incredibly powerful tool when properly loaded and in skilled hands, there is still more to the story. It is, in essence, an unfinished painting. There is still some detail work to be done to add a bit more capability.

Home defense shotguns (or any home defense gun really) are “come as you are” guns. They are snatched up in the middle of the night (or maybe day), and how it is, is how you will fight with it. The goal is to round it out and give us as much as we can to work with without creating an undue burden. Everything, of course, has a trade-off.

Most important, we must know what it is we are shooting at. That means we need to see it first. Under most circumstances, that requires light. In our home, where we control the lay of the land, a smart homeowner might leave certain lights on to control the lighting conditions. Or know where to go to turn all the lights on. Workable plans, but not fail-safe. A good plan B is just having a light on the gun.

Unlike handguns and even semi-auto rifles, running a handheld light gets really complex with a shotgun. Especially a pump-action shotgun. The dedicated shotgun lights from Surefire are the bulletproof options out there. In typically Surefire fashion, they are built to last. Unfortunately for us, they also cost a hefty chunk of change. The Streamlight TL-Racker comes in at second place for when the budget needs a little more consideration.

With the prevalence of Magpul shotgun accessories, standard weapon-mounted lights are also an option. There are also a few decent shotgun light mounts, but they can sometimes be hard to come by. Shotguns are brutal on electronics, though, so stick with the more reliable choices out there. Surefire is still the #1 option here. Streamlight pulls up at #2. I probably wouldn’t venture too far from those two brands, though.

Put a Sling on It

Once we have a light sorted, a sling is a handy thing to have too. As the old grumpy dude from Thunder Ranch says (Clint Smith):

“slings are to long guns as holsters are to handguns”

Having the ability to stow the shotgun if needed can be invaluable. Especially if you have people in the house that may need to be physically moved or guided, like children.

My opinion is that quick-adjust two-point slings are the best slings. They allow the greatest control of the gun without creating a puzzle of sling pieces. One point slings just let the gun hang. That is of limited usefulness, and the gun bounces around in uncomfortable places. Three-point slings are IQ tests disguised as a sling and generally to be avoided. Two-point slings are the middle ground, and quick-adjust slings allow the gun to be moved around the body rather easily. My two favorites are the Trunk Monkey Designs sling because we all need a splash of color in our lives, and the Proctor sling because of its minimalist design. There are a lot of good slings out there, though. Just make sure it is two-point and quick-adjust. Those are the key features. 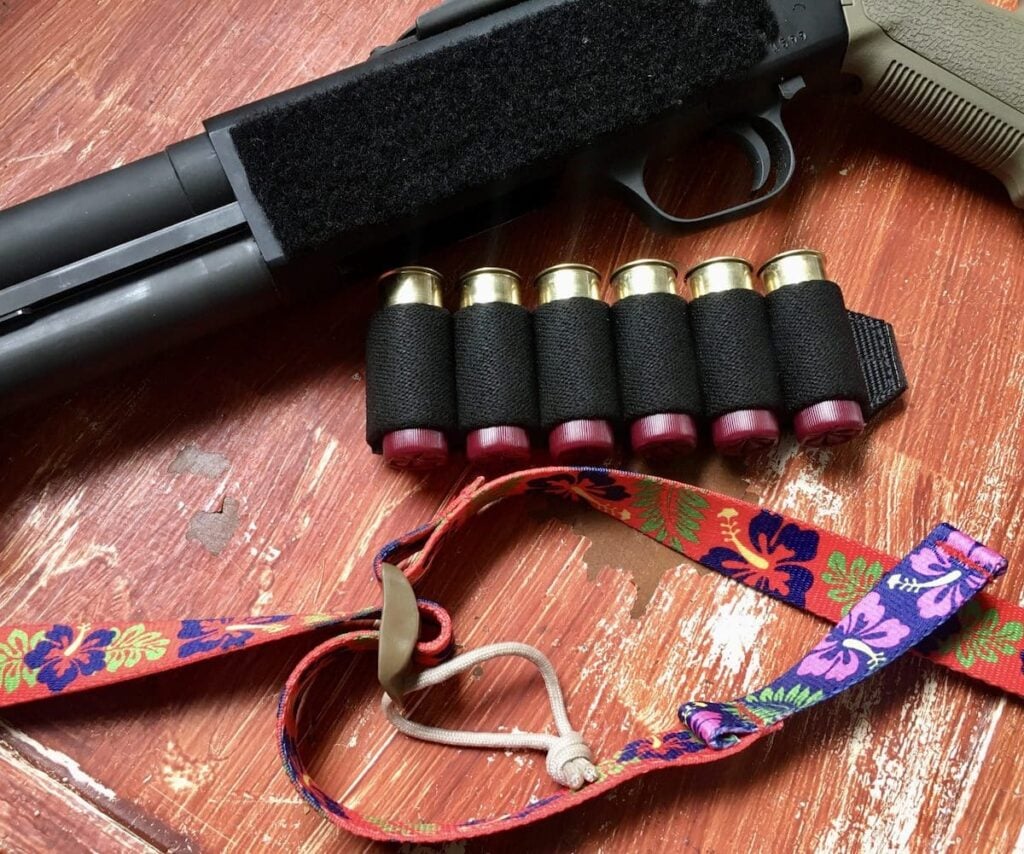 Lastly, we need to think about shotgun ammunition. What is in or on the gun is what we will be fighting with. While usually, the 5 or 6 rounds that will fit in most shotguns will be plenty, the reality is we don’t know. More ammo on the gun is cheap insurance.

The two best ways to add ammunition to the shotgun are with a good side-saddle or a good butt cuff. The slings that hold ammunition are an automatic no go. Too much added weight that swings around like a pendulum. Plus, they suck as an actual sling.

Side saddles come in a few different flavors. There are hard mount carriers like Tac Star and Mesa Tactical. The cheap option is a Tac Star side saddle. I have seen more than a few fall off of shotguns, though. If you go that route, keep an eye on the mounting screws. The Mesa side saddles tend to be more secure, but shell retention gets iffy in cold weather or if stored for a long time with shells in the carrier.

Velcro based carriers are the current hotness. They allow easy “reloading” of the carrier by just slapping on a new shell card. Of these, the Vang Comp Systems (VCS) carrier is the best. A budget-friendly workaround is to run the VCS shell card and using Industrial Strength Velcro to mount it directly to the receiver. There are other shell card options, but in my experience, they are not as good as the VSC version. The backer is usually too tall, making retrieval of the shells more difficult than it really needs to be.

The boss of side saddles is the Aridus Industries Q-DC. It has a price tag to match, though. If you absolutely have to have the best, though, this is it. It uses a hard mount carrier plate with an interchangeable part that holds the shells. The carrier can be easily reloaded.

Butt cuffs, in my opinion, are not as ideal as side saddles. They limit the gun’s flexibility a bit, and they are not as fast to reload from. Some people prefer them because they offer better balance and keep the weight towards the back of the gun, which is a fair point. Just don’t get a cheap one. Good butt cuffs are hard to find. The key criteria are that they need to hold the shells securely, and they need to not slide around on the stock. That is the problem with most of the cheap versions. They slide all over the place and are prone to unloading themselves.

Those are the basics and all pretty easy to pull off. While not 100% necessary to make the shotgun viable, they do add capability to the shotgun. Improved capability, especially when the cost is relatively low, is always welcome.

What do you guys like to put on your shotguns? Hit us in the comments.