This letter is in response to Glenn Terry's letter, "Petty politics plague our playhouse."

Shame on you Glenn Terry for regurgitating the Playhouse stories you have read. You’ve taken other persons’ “facts” and portrayed them as your own, as if they were correctly stated the first time. Many were not and you have failed to do your own research.

The last time the Playhouse failed and closed was due to mismanagement, not because the building wasn’t a “state of the art stage.” There are hundreds of historical playhouses across the nation that pack-them-in with less than what a renovated Coconut Playhouse will have. 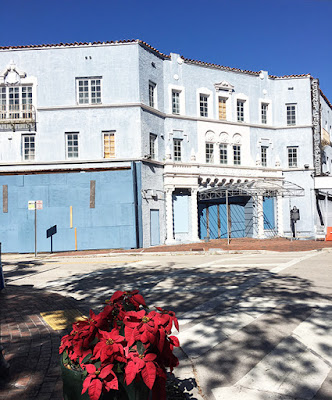 Miami-Dade County, which has spent the last 11 years “doing nothing," is the same group you believe “has done their homework.” Mr. Terry, I guess you just decided to skip over the several occasions that Lt. Governor López-Cantera chastised Miami-Dade County’s Michael Spring for failing to live up to the terms of the lease and for failing to secure the Playhouse from further destruction by neglect. You and I agree on one point; the State is very close to taking back the Playhouse property. You believe the reason the State is close to taking back the property is because Commissioner Russell had “derailed” the project. The real reason is because Miami-Dade County has failed to live up to their promises and is more interested in condos, apartments, shops and restaurants than it is in theatre.

You also state that the County’s “plans to finance it are in place.” Once again, you are incorrect. The citizens voted upon the 2004 County bond issue and the $20 million allocated for the Playhouse is to be used to restore the Playhouse, not to knock it down. While the County believes it can use the specifically allocated $20 million for their demolition plan, they would be wrong in doing so. I believe there are several local citizens and groups who would fight the misappropriation of the bond money in court and I believe they will prevail. It is really a very simple argument; “restoration” does not mean “destruction.”

Furthermore, the Playhouse is a single building not two separate buildings as you misstate. It seems you have adopted the County’s self serving idea that only “the more significant portion of a historical structure should be saved.” The front of the building was never used as a “Playhouse.” It was used as offices and apartments – the Playhouse is a single building and the entire building is historical. The County paid Jorge Hernandez, the County’s expert, for his opinion regarding the “more significant” portion and you, as well as other residents have been misled.

The Eidson group, or as you called them, the 700 seat group, are not expecting to “build two theaters inside of [the main theater].” The Eidson idea, which has not been finalized, is to restore and renovate the main theater and have approximately 700 seats, with a smaller 200 seat building alongside the main building. Mr. Terry, if you are going to “like something,” understand what you are “liking,” especially when you are offering your opinion to hundreds of other interested persons.

As far as “the derailment,” it was not Ken Russell’s idea to keep the County from following through. It was the two appellants, Barbara Lang and Katrina Morris who stopped the County from demolishing the Playhouse. Commissioner Russell did participate in the discussion, and shared his research regarding the historical designation of the entire building in 2004. The County has drastically misquoted the Historical Designation Report on numerous occasions in an effort to be able to demolish more than 2/3 of a historically significant building; the County truly is a developer in every (bad) sense of the word.

Some of the more significant points that you missed are most likely because you did not have someone else’s work to “borrow” it from. Currently, Arquitectonica is being sued in more than a dozen lawsuits where the businesses that hired them have alleged that Arquitectonica breached its duty by defectively designing buildings and are in violation of the Florida Building Code by not meeting the minimum building requirements. An architecture firm hired by the County should have zero pending lawsuits; however, one or two lawsuits might be acceptable. But, more than twelve open lawsuits is preposterous and clearly Arquitectonica is more interested in collecting its fees than properly designing safe buildings.

Next, GableStage is a local non-profit group that has consistently struggled to fill a 150 seat theatre; but you still believe, without reason or fact, that now they can fill a 300 seat theatre. On the other hand you believe, again without reason or fact, that Eidson cannot put together a board and hire an artistic director that can make a 700-seat theatre work, even though he was influential in making the Miami City Ballet (“MCB”) and the Adrienne Arsht Center both successful. Mike Eidson also raised $90 million dollars for the MCB, while GablesStage brings zero funds to the Playhouse project. Let’s not forget that the MCB is in its 30th season and has 49 dancers and a repertoire of more than 100 ballets. MCB performs for nearly 100,000 patrons annually during its South Florida home season in Miami, Fort Lauderdale, West Palm Beach and Naples, and tours to top theaters domestically and internationally. GablesStage, which is run by Joe Adler, is still trying to fill seats.

Hiring Joe Adler as the artistic director for the Playhouse is not a good idea. His works do not appeal to the general paying public and, as mentioned, he has trouble filling his 150-seat Coral Gables theatre. It’s no wonder that Adler’s choice of plays includes violence, rape, eating dead babies, child torture and defecation –he depends on controversy to fill seats – that’s not the business model that is going to make the Playhouse successful. Additionally, giving Adler a new “state-of-the-art" theatre is not going to make his plays any better than watching the Dolphins on a $5000 TV is going to help Miami win games. Joe Adler recounts a story about an audience member who once stopped him upon exiting a show. The theatergoer turned to the director and gasped, "My God, how can you do that? Why would you put that onstage? What are you going to do next, show people having sex and defecating?" Joe Adler's replied: "We did that last year." While free speech in the arts is important, producing plays at the Playhouse that will fill seats is the key to financial responsibility. Joe Adler and GalesStage is not the answer, its actually the beginning of another failed Playhouse. Meanwhile, MCB is filling seats, in part due to Mike Eidson.

Lastly, Mr. Terry, you finish up by stating, “I am confident that most knowledgeable Grove citizens support the 300 plan as well.” The reciprocal to your unsupported statement is that “only idiot Grove citizens will support Eidson’s 700 seat plan.” I find your statement to be not only offensive, but given your lack of knowledge of the facts concerning the Playhouse, I find it thoughtless and reckless and it’s something I would expect to hear from a developer. Perhaps we’ll have to portray you next year in the King Mango Strut Parade – how ironic.