Helmand Province About To Get A Visit From The Marines 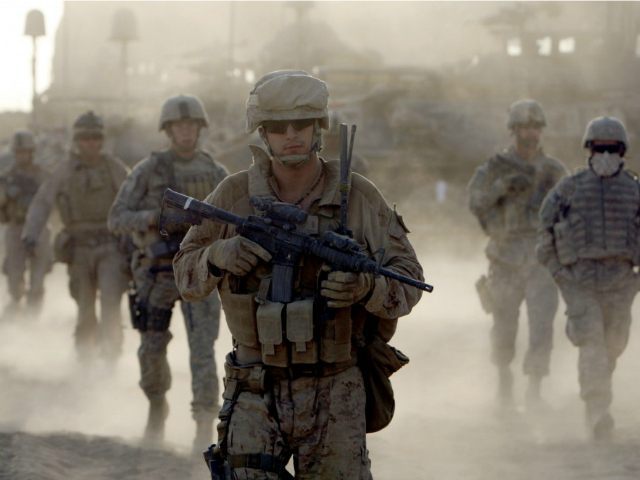 REUTERS/GORAN TOMASEVIC
by EDWIN MORA19 Apr 20173,909
SIGN UP FOR OUR NEWSLETTER

An estimated 300 U.S. Marines are heading to a Taliban stronghold in the southern Afghanistan province of Helmand, one of the deadliest regions of the ongoing war for coalition forces located along the Pakistan border, reports Marine Corps Times.

The American troops are expected to reach their destination — where the Taliban has largely reversed previous U.S./NATO coalition gains — by the end of this month. Nearly all of Helmand has once again fallen under the control of the Taliban. Helmand sits next to Kandahar province, widely known as the birthplace of the Taliban.
The 300 additional Marines, with the appropriate support, “can absolutely make a difference in Helmand province,” retired Gen. David Petraeus, who served as the top commander of U.S. and NATO troops in Afghanistan between 2010 to 2011, told Marine Corps Times.
He added that the Marines’ advise-and-assist mission could provide the Afghan National Defense and Security Forces (ANDSF) “the support they need to reverse the momentum of the Taliban in that important province that sits astride the critical ‘Ring Road’ that connects the southern and western parts of the country to Kabul.”
The ANDSF includes police and army units.
Marine Corps Times reports:

The deployment of Marines from the II Marine Expeditionary Force at Camp Lejeune, North Carolina, will be the largest Marine deployment to Afghanistan since 2014, when the U.S. military’s combat mission known as Operation Enduring Freedom officially ended.
By the end of April, the Marines will be in Helmand province as Task Force Southwest, replacing the Army’s Task Force Forge. During their nine months in Helmand, the Marines will train the Afghan National Army’s 215th Corps and the 505th Zone National Police in marksmanship, indirect fire and small-unit tactics and other skills, Marine Corps officials said.

According to various assessments, the Taliban controls more territory now than during any time since U.S./NATO troops removed the jihadist group from power in 2001.
Long War Journal recently reported that the terrorist group controls (7) or contests (6) nearly all of the 14 districts in Helmand.
The United States military has long considered Helmand to be a major Taliban stronghold.
“Helmand province is becoming increasingly dangerous for U.S. troops. In March, three American soldiers were shot at an Afghan military base in an apparent insider attack and in February, a Special Forces soldier was severely wounded in Sangin,” notes Marine Corps Times.
Although the Islamic State (ISIS/ISIL) has established a presence in the Afghanistan region, the Taliban remains the strongest jihadist group there. The two groups have fought one another for turf, influence, and recruits.
However, some Afghan officials and the U.S. military believe they have also worked together.
Former President Barack Obama reportedly approved the deployment of the 300 Marines before leaving office.
In the year after the former commander-in-chief declared an end to the U.S. combat mission and withdrew most American troops from the war-devastated country, the State Department deemed Taliban jihadists the world’s chief perpetrators of terrorism in 2015, with 1,093 individual attacks.
“Make no mistake, though we are no longer in a combat role in Afghanistan, it is still a combat environment,” Col. Matthew Reid, deputy task force commander, told Marine Corps Times in January. “As Marines, we train and deploy with a combat mindset.”
This year, U.S. Forces-Afghanistan (USFOR-A) revealed that the American-backed Afghan government had lost control of nearly half (43 percent) of the country, primarily to the Taliban.
The rest of the country was either contested or under the control/influence of terrorists.
Nevertheless, U.S. National Security Adviser H.R. McMaster sounded optimistic over the weekend that U.S.-backed forces will defeat the Taliban.
He told TOLO News during his first trip to Afghanistan:

The Taliban must be defeated as well. They can be defeated in a number of ways. For those that are reconcilable, who are now willing to join their Afghan brothers to strengthen the Afghan state, to end the violence, to be part of the political process, I think your president and the chief executive officer they will welcome them back in. So it is their choice now.

The Taliban has refused to participate in peace negotiations with the Afghan government, saying they have no reason to engage in talks because they are winning the war.
American Gen. John Nicholson, the top commander of U.S. and NATO forces in Afghanistan, said late last year that the Taliban generates nearly 60 percent of its funding from trafficking opium primarily cultivated in Helmand.
In its most recent assessment, the United Nations reported that Helmand remains the top opium-producing province in Afghanistan.
The war-ravaged country is the world’s top supplier of opium and its heroin derivative.

Helmand Province About To Get A Visit From The Marines