Sick Libs Show Their Hate For Trump By Attacking Barron.

"Funny" Tweets About Barron Trump At The Inauguration Are Not Appropriate 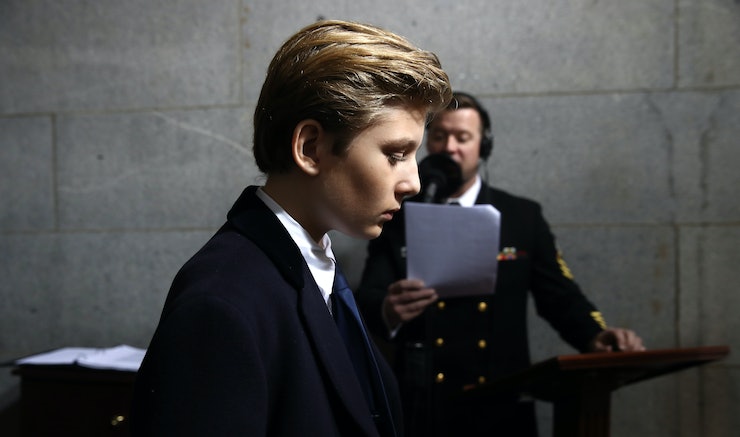 SOURCE: AFP/AFP/Getty Images
Share this
By JESSICAH LAHITOU
2 days ago
Millions of Americans are disappointed by the election of President Donald Trump. He's been divisive, to say the least, making statements that many of his own supporters even acknowledge to be sexist, racist, and generally offensive, not to mention ignorant. Trump has never held elected office; has refused to release his taxes; has made questioning President Obama's birth certificate a part-time job; and seems to relish using Twitter to intimidate his so-called enemies. And none of that is even remotely a reason to cyberbully his 10-year-old son, Barron Trump. Unfortunately, plenty of Twitter users didn't get that memo on Inauguration Day.
No child gets to choose their parents, and that includes Barron Trump. There is a longstanding public tradition of leaving children of presidents who are minors — under the age of 18 — out of the press. Children are rightfully given the benefit of privacy, even children of presidents.
Yet "Barron Trump" trended on Twitter, and many users made cutting and cruel remarks about everything from his physical appearance to his supposed attitude to speculation on whether or not he's autistic.

there is a rumor, that the little spawn of the devil, Barron Trump/Damien, is autistic. might explain Cheeto Ceasar's obsession with vac's.
— DJ Pure Applesauce (@DJ_P_Applesauce) January 10, 2017

Barron trump looks more of a freak than his dad, and that takes some doing
— Simon Noble (@simonnoble58) January 21, 2017

SOURCE: LodgerThanLife on Twitter
SOURCE: Matt Oswalt on Twitter
SOURCE: Mediaite on Twitter
As a mother, this breaks my heart. I cannot imagine the immaturity and meanness necessary to drag someone's child into an adult dislike of a political leader. It goes a long way in explaining why so many good people don't want to enter into politics at all. With the bright lights unleashed upon one's family, a person who would otherwise rush to become a public servant is justified in thinking it would be unethical to force their kids to endure public harassment and shame.
Criticism of Ivanka, Donald Jr., Eric, and Tiffany Trump is completely fine. They are adults, and their actions as such are up for public debate. Especially considering that Donald Jr. and Eric Trump will now be running the Trump Organization; to leave them alone and out of proverbial print would be doing a disservice to the country. With Ivanka and her husband, Jared Kushner, set to be closely entwined with the White House, they too are open for critique.
But a 10-year-old boy should be exempt from public bullying. This is probably easier for a mother to grasp, because imagining one's own child in a similar position is pretty much a reflex. And the thought, to me, is devastating.
I'd encourage everyone to leave Barron Trump out of their disdain and disgust with his father. Michelle Obama's advice is apt here: "When they go low, we go high." Don't let a political rage reduce you to someone who bullies a child. Go high, and leave Barron alone.

Sick Libs Show Their Hate For Trump By Attacking Barron.