Was A Message Just Conveyed In An Earthquake? 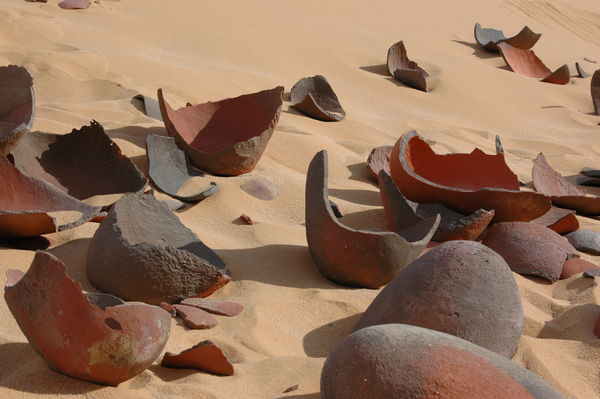 God is sovereign and always speaking through creation.  If it's truly from Him, it will confirm what is already written in Scripture.

Today a substantial earthquake hit the Greek island of Crete, which is mentioned several times in the Bible (Acts 2:11; Acts 27:7–21).  It was huge for the area (6.0).  It shook a number of nearby towns, including Θραψανό (“Thrapsano”; #5 on the map below), which is famous for its pottery—a big quake hits a Gentile city known for its pottery.  See Rev. 2:26–29:

To the one who is victorious and does my will to the end, I will give authority over the nations [Gentiles]—that one “will rule them with an iron scepter and will dash them to pieces like pottery”—just as I have received authority from my Father.  I will also give that one the morning star.  Whoever has ears, let them hear what the Spirit says to the churches.

According to the first version the name Thrapsano is a compound word from the verbs thravo (“break”) and psino (“cook”), because during the baking process many vessels were broken—“thrivotan.”

As a pottery center, it is quite possible that the village was named Thrapsano due to the existence of broken ceramics around kilns in big quantities, called thripsala (“smithereens”), or thrapsala. 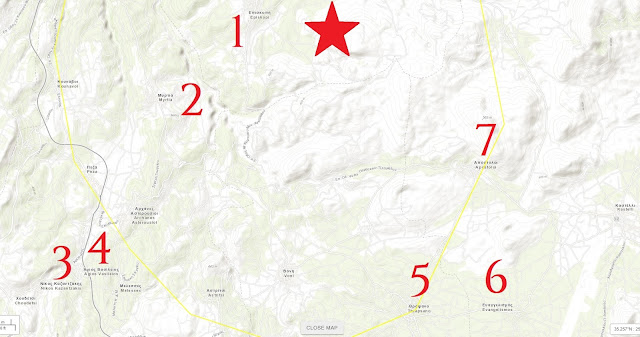 But there's much more to this earthquake that just struck.  Take a look at the map.  The star represents where the quake struck.  The numbers represent nearby towns that were shaken, and, according to reports, the earthquake's duration lasted an especially long time.  Everything on the map was shaken. One man died when a church collapsed and many others were injured.

1. Episkopi - from the Greek word used in the Bible translated “overseer” or "bishop.”  In Acts 20 and Titus 1 this title of office is used interchangeably with “elder.”  So if elder is the person, overseer is the office.

2. Myrtia - from the Greek word for “myrtle.”  The first reference to myrtle in the Bible is found in Nehemiah 8:15 in relation to the Feast of Tabernacles.  Myrtles, palms, and citrus are closely connection in the Bible with this festival.  Fascinating considering that the La Palma (The Palm) eruption has been ongoing during this year's Feast of Tabernacles on the Jewish calendar.

4. Agios Vasileios - “Holy King.”  King Jesus is coming for His overcomers.  And we overcome by one thing—faith in Jesus.  We overcome by the blood of the Lamb and the word of our testimony (i.e., the gospel: Rev. 12:11).
5. Thrapsano - see above.

6. Evangelismos - the Greek word for “Annunciation,” referring to the proclamation made to Mary by the angel Gabriel that she would bear the Son of God.  It's derived from euangelion, which is “gospel” or “good news.”  We believe the good news and so we will soon be born into Heaven.  In a manner of speaking, the Revelation 12 Sign in 2017 was the annunciation that the corporate child, the Church, is about to be born.

7. Apostoloi - “apostle.”  The Church began with the apostles, built on the foundation of Christ.  The Apostle John was the writer of the book of Revelation.

In other news, evidence for the destruction of Sodom and the cities of the plain has just been presented in Nature, one of the most prestigious scientific journals on earth.  Separately, a joint American-Turkish science team has revealed fresh evidence that the Durupinar site in Turkey contains the actual remains of Noah's ark. 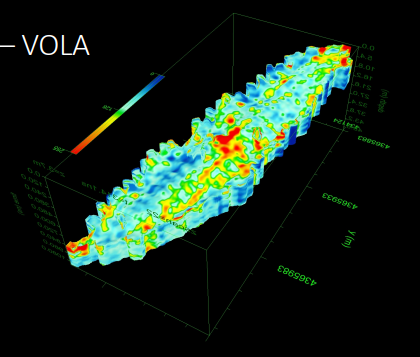 Sodom's destruction entertained in a mainstream science journal, and now new evidence for Noah's ark all in one week.  Could we get any stronger confirmation of the days of Noah and days of Lot theme then this?  Here we are at the bitter end and God is still giving clear confirmation, hopeful that a few more will heed the warning and board the ark just as the door is closing.
A dmit that you're a sinner.
B elieve that Jesus Christ died for your sins and rose again.
C all on the Lord Jesus Christ to save you.

Was A Message Just Conveyed In An Earthquake?