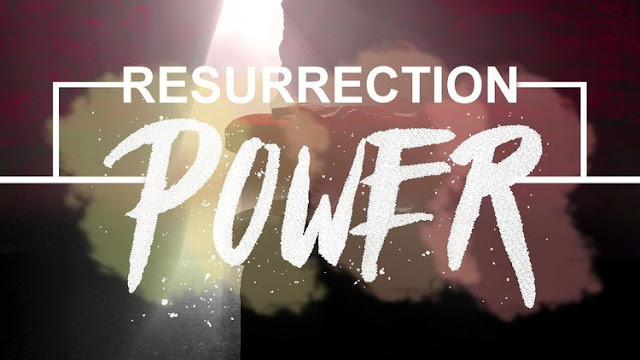 Bible Study of Ephesians
The Reconciliation and Consummation of All Things through Christ
Week Two: Knowing God, Gaining Strength (Ephesians 1:15–23)

During last week’s study, the apostle Paul gave glory to God by blessing the Father who has blessed us with every spiritual blessing in Christ (note the varied, three-fold use of the phrase “to the praise of His glory” at the end of each section for all three Persons of the Trinity: Father, Son, and Holy Spirit; Eph. 1:6; 1:12; 1:14).

Verse 1:10, a fitting theme verse for the entire letter, reveals the Father’s ultimate end-goal in His plan to reconcile the entire redeemable creation under the supreme authority and rulership of His beloved Son, Jesus (cf. 1:6). The Church, the body of Christ, plays a key role in this current age as the world moves closer toward the climax and birth of God’s kingdom on earth (a.k.a. “the dispensation of the fullness of the times”).

In this next section (1:15–23), we will look at how Paul further develops his opening message. As is the case with every passage of Scripture (2 Timothy 3:15–16), there are applications for daily living within this text, not only for Paul’s original readers, but also for those of us today who are also chosen by the Father, redeemed by the Son, and sealed by the Spirit.

Therefore I also, after I heard of your faith in the Lord Jesus and your love for all the saints, do not cease to give thanks for you, making mention of you in my prayers...”

Paul shifts to speaking in the first person here: “...I heard of your faith…[I] give thanks for you...in my prayers.” The spiritual blessings given by the Father previously described in 1:3–14 have been received by the Ephesians, and the evidence for their status as children of God can be seen in their abiding trust in Jesus and their continuing love for fellow believers (cf. John 13:34–35; 1 John 5:1–2).

The main takeaway from this first section is the idea that faith and love are linked together. Faith/trust in the Lord Jesus should also coincide with love for all believers. In other words, “A proper relationship with God should lead to a proper relationship with other Christians” (see also Eph. 6:23, where Paul again links “faith with love”).* Also, it is worth noting that Paul gives thanks to God for his brothers and sisters in the faith and prays on their behalf. This must have meant the world to them, especially considering Paul’s status as an apostle and knowing that he had spent so much time in Ephesus laying the foundation of the gospel (see Acts 18:19–22; 19:1–41; 20:17–38). 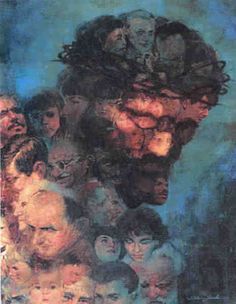 ...that the God of our Lord Jesus Christ, the Father of glory, may give to you the spirit of wisdom and revelation in the knowledge of Him, the eyes of your understanding [“heart”] being enlightened; that you may know what is the hope of His calling, what are the riches of the glory of His inheritance in the saints, and what is the exceeding greatness of His power toward us who believe, according to the working of His mighty power...”

Here Paul reveals the content of his intercessory prayer on behalf of the Ephesian believers. Essentially, the apostle has their spiritual growth in mind, and he isn’t so much praying for God to give them something they don’t already have; rather, he wants these beloved children of God to realize with greater clarity what they’ve already been given through Christ (refer back to chapter 1, verse 3).

Hoehner’s outline of these verses from his commentary provides a clear and helpful summary:

“Paul prayed that believers would come to know God intimately (v. 17) in order that they might know three facts:

Following the pattern above, we can see that a believer’s first priority is growing in their relationship with God (see v.17, “wisdom and revelation in the knowledge of Him”). One can’t know God personally without the Spirit of God awakening them first—this is what Paul refers to as “the eyes of your heart being enlightened” (v. 18). For a helpful cross-reference, see 1 Corinthians 2:12–14.

As the believer grows in this loving relationship with God, he or she should become more and more hopeful,* visualizing a glorious future among God’s treasured people (His inheritance),** and learning to access His immense power available for every trial in this life.*** The final four verses in this week’s section will expand on the last point of Paul’s prayer about God’s limitless power for believers in the body of Christ.

*See also Romans 5:5. There is no other hope for mankind other than this calling from God to become His own special possession. Paul echoes this in Ephesians 2:12: believers were once "without hope," and in Eph. 4:4: there is "one hope" to which they were called. Also, Paul clarifies in Colossians 1:27 that this one solitary hope for every believer is not based on present circumstances, personal dreams, or material possessions; on the contrary, Christ's presence in the believer is the hope of their [future] glory in heaven.

**Every believer is precious and valuable in God's sight; see the New Living Translation's take on verse 18, "...his holy people who are his rich and glorious inheritance" (Eph. 1:18, NLT). Like Jesus, who is rejected by the world but chosen and valuable to God, we are precious gems and also called "living stones" (1 Pet. 1:4–5).

***In verse 19, Paul uses an excess of four different Greek words that refer to God's power: dunamis, energeia, kratos, and ischus. You might recognize a couple of these words in English: dunamis (dynamite) and energeia (energy). Kuruvilla adds,"...this piling on of synonyms effectively emphasizes the incomparability of divine power" (45). 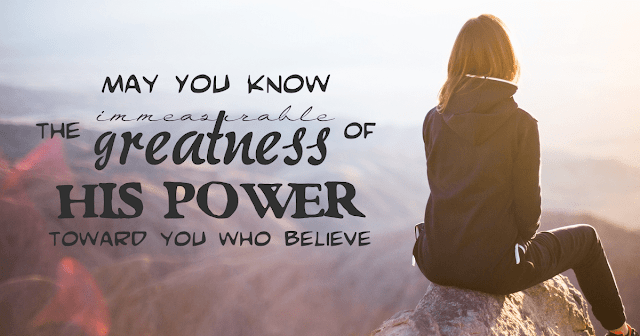 ...which He worked in Christ when He raised Him from the dead and seated Him at His right hand in the heavenly places, far above all principality and power and might and dominion, and every name that is named, not only in this age but also in that which is to come. And He put all things under His feet, and gave Him to be head over all things to the church, which is His body, the fullness of Him who fills all in all.”

Carrying over from the end of verse 19, the Father’s mighty power works [Grk. energeia] at the present time for believers, and it is the same mighty power that He worked [energeia] at the time of Jesus’ resurrection and ascension to heaven! Paul also refers to this “resurrection power” in Romans 8:11 and Philippians 3:10. While believers still carry around the flesh [i.e. what the apostle calls “the old man” in Eph. 4:22], they are to live in light of Christ’s resurrection/exaltation and draw strength from their risen Lord instead of former corrupting desires and passions.

Next, in verse 21, Paul alludes to the ongoing conflict in the heavenly places—one of the recurring themes in the letter. The believer needs to know who has the supreme authority over all hostile entities, especially since there are dark, supernatural powers stronger than any human being who continue to wage war and plot against God’s people (see Eph. 6:12). Thankfully, the resurrected and exalted Christ exceeds them all—Jesus, who is fully God and fully man, has been elevated to the highest place of authority, “...far above all…”

The first part of verse 22 contains theologically rich language that spans from Genesis to Revelation, “And He put all things under His feet…” Paul is connecting several dots here, starting with God’s original purpose for creating man and woman—to rule over every creature and subdue the earth for His glory (Gen. 1:26–28). Then, in the middle of the Bible, we find another reiteration of the dignified place and position of mankind in God’s plan:

“What is man that you are mindful of him,
and the son of man that you care for him?
Yet you have made him a little lower than the heavenly beings

Not all advice is good advice
Prepare For Victory
Merry Christmas and Mahatma Gandhi
Vechain Blockchain Technology Powers …
Four Things Jesus Says About a Discip…
And crowned him with glory and honor.
You have given him dominion over the works of your hands;
You have put all things under his feet”
(Psalm 8:4–6, ESV).
Where Adam failed as head of the first humanity, Jesus succeeds and is now head of a new humanity (cf. Rom. 5:12, 17). Hebrews 2:5–8 sheds further light on Ephesians 1:22 and explains why evil powers are still ruling in the world today even after the triumph of the cross and resurrection of Jesus; see especially Heb. 2:8, “...when he [the Father] put all things under his control, he left nothing outside of his control. At present we do not yet see all things under his control."

One day soon, however, there is going to be an end to the corrupt rule of these evil powers, both natural and supernatural. The apostle John records the time when all things will finally come under Jesus’ authority, “Then the seventh angel blew his trumpet, and there were loud voices in heaven, saying, ‘The kingdom of the world has become the kingdom of our Lord and of his Christ, and he shall reign forever and ever” (Revelation 11:15, ESV).

Going back to Ephesians 1:22–23, we discover that Jesus is not alone in His appointment as world ruler—He has company! Paul states that one of the reasons why the Father made Christ head over all things is “for the Church,” which is also called “His body” and “fullness.”* This is an astounding reality for those chosen by the Father to have such privilege, power, and authority. The acquisition of believers into the body of Christ, therefore, is a major step in the Father’s plan to bring all things together under the headship of Christ (refer back to Eph. 1:10).**

*Most of us are familiar with the Church being called Christ's body, but what does it mean to be His fullness? Kuruvilla provides a helpful answer, "It is very likely that the idea of pleroma [fullness] in Ephesians refracts the OT concept of divine presence, akin to God's Shekinah glory...'fullness' then is the presence and power of God. In the OT he filled the sanctuary, now in Christ, he fills the church that thereby partakes of the divine fullness..." (48). See also Isa. 6:3; Jer. 23:34; and 2 Chron. 5:13–14. 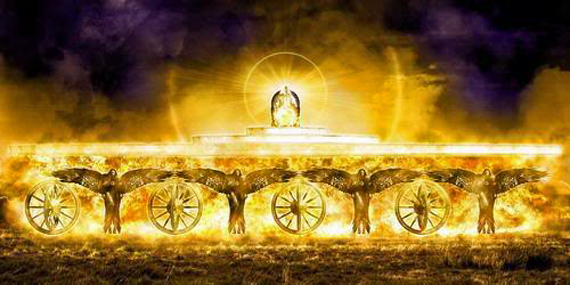 Application to the Body of Christ:

"The Church manifests God’s incomparable power [and], as the fullness of Christ, it expresses his divine rule in this age" (Kuruvilla, 50).

Have you ever struggled with thoughts, feelings, and experiences of powerlessness, defeat, and failure? This second week of our study through Ephesians should help to encourage every believer and remind them of their privileged position in the Father’s plan. Take heart, brother or sister in the Lord! You are a member of Christ’s body, and He is Lord and Ruler over all things. If you feel empty and worn down, then understand that He is the One that fills you up (cf. Eph. 5:18; Col. 2:10)!

Paul will continue to expand on the concept of the Church as the Spirit-filled temple of God in the next chapter, but to conclude this week, there are three main applications that can be derived from the study above:

1) Remain faithful to Christ and continue to show love toward the family of God (1:15–16)

2) Draw closer to the Father day-by-day, increasing the depth of your relationship with Him, appreciating your calling, and truly valuing yourself the way He sees you—a treasured possession: like a diamond, pearl, ruby, or emerald (1:17–19)

And last, but not least:

*See also 2 Corinthians 1:8–10; the Holy Spirit speaks through Paul to relay a similar message to anyone who is in deep despair: Trust in God who raises the dead, not in your own resources!