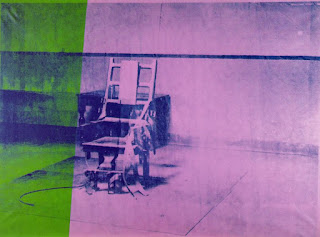 In 1989, I was a young lefty lawyer looking for a public interest law job.  I could have gravitated towards any number of areas but I somehow landed at a non-profit agency that was ground zero for challenging death sentences in California.  Little did I realize that it would become my life's work for the next quarter of a century.

It was exciting and energizing, and what made the work especially compelling was that every case touched on virtually every important social justice issue -- poverty, mental health, race, abuse of state power and constitutional rights.  And the clients were not stereotypical monsters as they are so often portrayed.  They were badly damaged people -- human beings -- who had endured unspeakable things and had done unspeakable things, but who were trying to hold on to a sense of humanity, even dignity, that seemed impossible given their dire circumstances as "condemned" men and women.

At that time there were probably a little over a hundred men and a couple of women on death row, and although there were plenty of cases wending their way dangerously to the end of the legal process, the possibility of executions in California seemed more hypothetical than real.

Everything changed in 1992 when Robert Harris became the first of thirteen men to be executed in California. Robert was finally put to death in San Quentin's gas chamber after the U.S. Supreme Court lifted a Ninth Circuit stay of execution for the fourth and final time, with its cold, preemptive order stuttering out of the fax machine:  "No further stays of Robert Alton Harris's execution shall be entered by the Federal courts except upon order of this Court."

Robert's execution was an absolutely searing experience.  There was, of course, the human toll, the tortuous physical and emotional brutality that Robert suffered and the devastating impact on his loved ones.  For me, there was also the profound sense of helplessness in the face of the awesome power of the government that wanted -- needed -- its pound of flesh. Robert's execution ultimately wasn't about Robert or the righteous legal claims that should have led to granting him a new trial.  The longer his case dragged on the more ineffectual the government looked. California needed to demonstrate that it could carry out executions and it was going to have this one.  And it did.

A year-and-a-half later David Mason was executed.  David had indicated that he did not want to challenge his death sentence and was then prodded into forfeiting his appeals by a lawyer who had many troubling issues of his own and exploited David's suicidal tendencies.  I will never forget the feeling of utter defeat when I was informed, as I worked on an 11th-hour legal challenge to David's case that would be filed in the event he changed his mind, that I should stop working; that he wasn't going to change his mind.  The state took David's life without seriously considering the fairness, indeed the legality of his death sentence.

My client, Tom Thompson, was executed in 1998, the fifth California execution. As I have written about (at length), Tom was essentially executed on a legal technicality after a series of safeguards meant to ensure the reliability of death sentences all broke down.  (See, e.g., The Arbitrary Execution of Tom Thompson)  The state's overarching need for finality yet again trumped concerns for justice.

And I witnessed the execution of the sixth, Jay Siripongs, which took place about six months later, after agreeing to be an observer for his legal team

Having a client executed -- a man who you worked with for seven years, who you cared about and who cared about you -- a man who may have been innocent and who was killed because of the arbitrariness that plagued the judicial process rather than because his legal claims were meaningfully considered and fairly rejected -- is not something one gets over easily.  And then, having to witness another man's death -- watching an otherwise physically healthy 43-year old man strapped to a gurney and taking his last breaths after being injected with poison -- is not something one gets over ever.

Leaving the death chamber after Jay's execution, having dutifully followed the many rules laid down by prison officials for when to move, where to stand and how to act, I felt complicit.  I did what I was supposed to do  -- what I was asked to do by Jay's lawyers: dispassionately observe the proceedings to make sure that the execution was carried out according to protocol.  It was.  And it left me diminished by having taken part in such a ghastly process; tainted for being so closely involved in such a barbarous act.

But the work goes on.  For me, for another twenty years.

Every now and then there was a legal victory -- or some positive shift in the process that was seized on as a victory --  or a spark of a connection with a client that made one feel that the work was still worthwhile.  But it was all too rare that the cases were decided on their actual merits.  Instead, years were spent litigating procedural issues to determine whether legal claims could even be considered at all.

I lost a case despite establishing that the trial lawyer was so debilitated by alcohol that he needed a time out before resuming his representation -- although when he did it was too late to investigate and present the powerfully sympathetic life history evidence that most likely would have persuaded the jury to vote to spare his client's life.  I won a case in which an African American juror who was holding out for a not guilty verdict was kicked off the jury for "failing to deliberate."  That one took 15 years despite the obviousness of the judge's error.

Meanwhile seven more men were executed until litigation over the cruelty of the state's method of killing resulted in what has essentially been a moratorium since 2006.

In 2012, I argued a case in the California Supreme Court.  At that time six of the seven justices were less than sympathetic, if not pointedly hostile, to death penalty appeals but I nevertheless thought I had a slam dunk.  The key instruction explaining to the jury how it should consider and weigh the evidence in determining whether or not to vote for death was mistakenly -- inexcusably -- omitted.  The jurors were on their own without any guidance in making this most critical choice between life and death.  But the justices preferred to ask questions about the gruesome facts of the case.  They ultimately found this fundamental error would not have made a difference -- despite the fact that an earlier jury hearing the same evidence (including the gruesome facts) had actually deadlocked on what penalty to impose after being given the complete and accurate instructions.

I walked out of that courtroom feeling that I had just wasted years working on a case in which the highest court in the state cared more about meting out punishment than dispensing with justice.  I had become what I had long feared -- merely a cog in the death machine.

And it is a machine that is completely and irrevocably broken.  Who gets a death sentence and who is ultimately executed is an arbitrary and unreliable process, based far more on factors of race, on the political leanings of prosecutors and the quality of defense counsel than on the nature of the crime or the character of the defendant.  (See California's Death Penalty Cannot Be Reformed; It Must Be Replaced)  It is a machine in which the legal procedures one needs to navigate in order to have claims meaningfully considered by the courts are all but impenetrable.  And it is a machine that simply can no longer function -- overwhelmed by far too many cases and not enough qualified lawyers to handle them -- it takes several decades to reach a resolution, more often because the inmate has died of suicide or what are referred to as "natural causes."  (See, e.g., The Unnatural Death of Bernard Hamilton)

But, at bottom, it is not because of its arbitrariness, its ineffectiveness or its unreliability that California's death penalty must be abolished.  It is not because it is irrefutably racially biased.  And it is not because it is dysfunctional and ridiculously expensive -- costing taxpayers $150 million a year while close to 750 inmates languish on the country's largest death row.  Although those are all compelling reasons.

It is because state killing is killing.  It is using the immense powers of the government for vengeance.  It is an immoral, barbaric practice that degrades and dehumanizes everyone -- from the condemned to the condemners and all the rest of us.

It is far past time to tear the machine down.