Wilco Rocks -- And Not Just For Dads 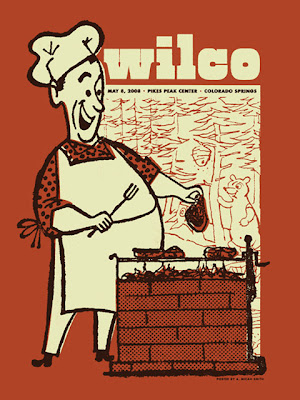 I originally wrote this piece on February 1, 2012, after Wilco played a fabulous show at the Warfield in San Francisco.  This week they are playing at the Fillmore and I can't wait to see them again.

Dad Rock, my ass.  OK, I'll admit that I am over 50 and the father of two, and that when I saw Wilco at the Warfield in San Francisco the other night, I fit comfortably within the demographic most represented -- relatively immobile white men over 40, holding plastic cups of beer and shaking nothing but their heads to the music.  So, maybe that's the audience for Wilco these days.  But that should not diminish their stature as one of the truly great rock bands or that of their front man, Jeff Tweedy, who is the most compelling singer/songwriters of his generation.

For me, the pantheon of (North) American rock musicians who not only capture the spirit of their time but leave a legacy well beyond it are Bob Dylan, Neil Young and Bruce Springsteen.  If the torch must be passed, I don't think it is that outrageous to think of Tweedy, the 44-year old leader of Wilco, as the one to pick it up.  (It is not surprising that along with Billy Bragg, Tweedy (with the rest of Wilco) recorded the brilliant Mermaid Avenue albums based on unreleased material written by Woody Guthrie.)

Jeff Tweedy is an elegant lyricist who crafts deeply effecting, unsparingly honest songs, often about pain and loss, self-doubt and self-destruction, and sings them with his nasally but soulful and quite captivating voice.  Part way through the show at the Warfield, he paused to check in with the audience.  He somewhat jokingly conceded, "this has been kind of a morbid show so far," and asked, "are you guys okay?"  He then added, "we figured if you're here, you probably enjoy being sad -- at least a little bit. I know I do."  One reviewer described the show in a way that aptly describes Tweedy's music generally.  Rather than morbid, "it felt like a solemn celebration . . . the songs themselves may have expressed misery, but the grace and energy given to them imparted a kind of a buzzing, heartworn elation."

What makes the Dad Rock moniker so misplaced in my view is that Tweedy and Wilco are not merely an easy throw back to those artists and bands of my generation's heyday.  While the influences of the Byrds, the Band, Neil Young, John Lennon and others can be heard, there is also a hard driving, progressive sensibility coursing through the music.  Some tunes are simple and straightforward, others experimental and complex or, as is often the case, a combination as one critic described of "elaborate constructs surrounding their simple melodies."

Tweedy has evolved from when he practically co-invented the genre of alt-country rock in the late 1980s-early 1990s with the band Uncle Tupelo.  Wilco's albums over the years have taken very welcome if "unexpected detours" into psychedelia, power pop, soul, R&B and electronica.  Or, as David Dye put it, Wilco has alternated between folk-tinged alt-country and experimental pop, surprising fans and critics with its sonic inventiveness along the way," and in the process "made some of the finest albums of the '90s and '00s, while establishing itself as a virtually peerless live band."

Another reviewer explained that "Wilco's great strength lies not just in Jeff Tweedy's world-weary inscrutability, but the ways he and the band matched those stark, sometimes startling sentiments to expectation-defying deconstructions of Americana."
Yankee Hotel Foxtrot is now ten years old, but it remains for me one of the greatest Rock 'n Roll albums of all time.  As the notoriously stingy Pitchfork beams:  "Complex and dangerously catchy, lyrically sophisticated and provocative, noisy and somehow serene" it is "simply a masterpiece."
Wilco is known as a great band to see live, a reputation cemented by their release in 2005 of Kicking Television: Live in Chicago, "a recording that doesn't merely retread a band's back catalog, but puts their songs in a new perspective, and in this case these performances reveal that one great band has actually been getting better."

The concert at the Warfield did not disappoint.  It included several songs from their fine new album, A Whole Love, as well as compelling renditions of some of the band's impressive catalog, including I Must Be High and Shouldn't Be Ashamed (from A.M.); Sunken Treasure, Misunderstood and Forget the Flowers (from Being There); Shot In The Arm (from Summerteeth); Ashes of American Flags, Heavy Metal Drummer (from Yankee Hotel Foxtrot); At Least That's What You Said, Handshake Drugs (from Ghost Is Born), and Impossible Germany (from Sky Blue Sky).

As I waited eagerly for each gem, I was struck by how many more great songs there are in the Wilco oeuvre.  Personal favorites not covered on this night included How To Fight Loneliness, She's A Jar, Via Chicago, Jesus Etc, Poor Places, Pot Kettle Black . . . .  I could go On and On and On.  (Click on the "Wilco" tag below for a sampling.)

Given how Wilco changes up the set list for each show, I was tempted to go see them again at the Fox Theater in Oakland, where they played last night.  But two shows in one week for a 50+ year old family man would be pushing it.

Dad Rock?  Here's what Tweedy himself had to say about Dad Rock:

I recently had a revelation about it: When people say dad rock, they actually just mean rock. There are a lot of things today that don’t have anything to do with rock music, so when people hear something that makes them think, “This is derived from some sort of continuation of the rock ethos,” it gets labeled dad rock. And, to me, those people are misguided. I don’t find anything undignified about being a dad or being rocking, you know?

Wilco Rocks -- And Not Just For Dads