February 11th 2011
View original
Once upon a time there was a famous street game in the nation. That game was called Gilli Danda. My father used to play it in his childhood. I am not writing this post to make it popular once again, I am writing  it just to keep a history. 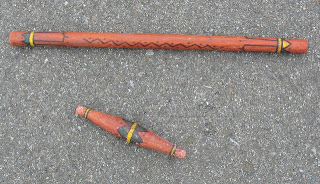 Now how It was played. Take a look:-
Accessories :- 1. Gilli - 3 inches long 1 inch diameter at the centre
2. Danda - 2 feet long and 1-inch in diameter
From image gilli and danda are clear. Gilli is smaller than danda and tapered at both ends as you can see in the image.
Teams :- You can make two teams as many players can play it. Just equally divide them into two teams.
step 1:- Toss the coin. The team which wins it can select batting or fielding.
step 2:- A circle and hole made in the center from where batsman will bat.
step 3:- First player of team who is batting will bat and other team is spread in the ground to catch.
step 4:- Batsman lifts the gilli high in the air with the danda hitting the gilli at one end (tapered) and quickly strikes it. 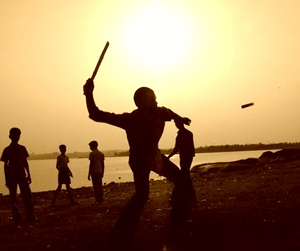