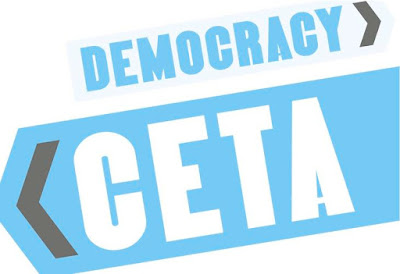 While it looks, unfortunately, like the Belgian opposition to CETA is dissolving, it is perhaps instructive to understand the core of Wallonia's concerns about it. While some of it revolves around the hit that some of its domestic industries will take if it is ratified, of much greater concern is the power it gives corporations through the investor state dispute settlement mechanism. They are objections that most reasonable Canadians, I believe, would share if they were more familiar with the 'trojan horse' that will compromise national sovereignty on a much wider scale than NAFTA already has.

Given that Canada has been sued many times under NAFTA, we should all be very, very wary of ensconcing those rights further, despite the unalloyed enthusiasm the Justin Trudeau government has for such deals.

1. RAGE AGAINST THE MULTINATIONAL CORPORATION
While the Walloons are worried their agriculture sector will suffer under the deal, they are increasingly concerned about the investor-state dispute settlement system (ISDS) as well. The region’s socialist government has adopted many of the concerns of the civil society groups that oppose the free trade deal: they say it gives multinational corporations too much power to sue governments if they make regulations that affect their ability to turn a profit.

2. TRANSPARENCY
The Walloons want changes to the ISDS provisions of the treaty, specifically the tribunals that would settle disputes. They want them to be more transparent to eliminate the possibility of bias or conflict of interests by the people appointed to adjudicate disputes.

3. CLOSING LOOPHOLES
The Walloons want to see loopholes closed that they say would allow U.S. multinationals with offices in Canada to use the treaty to sue governments in Europe, says Osgoode Hall law professor Gus Van Harten.

4. PRESERVING JURISDICTIONS OF DOMESTIC COURTS
Van Harten also says the Walloons want stronger language in the treaty that would preserve the jurisdiction of domestic courts in individual countries to hear disputes, instead of turning them over to the new tribunal system envisioned by the treaty.

5. ‘A CAT IN A BAG’
In a parliamentary debate last week, Wallonian President Paul Magnette used an interesting metaphor to describe what he says is the opaque nature of the tribunals. He said it was like buying “a cat in a bag.”

Magnette has also said that “we have to say no so we can negotiate” better labour, environmental and legal standards.

Some have said that the five-page “joint interpretative declaration” that is to be added to the CETA text could be given the force of law and could clarify some of what the Walloons view as objectionable in the treaty.

As they say, stay tuned for further developments, but in the meantime, all of us as Canadian citizens have an obligation to educate ourselves on these issues and decide on them for themselves, rather than placing unearned confidence in Mr. Trudeau and his sunny smile.

UPDATE: Former MP Craig Scott has a lacerating look at our government's support for CETA in The Tyee, support that mirrors the agenda pushed by the former Harper government:

Based on a European negotiator’s briefing to NDP MPs during CETA negotiations (the Harper government refused to brief MPs), it was Canada that insisted on some of the most regressive and dangerous provisions in CETA.

The provisions in question were — and still are — the investor-state dispute settlement (ISDS) procedures. This part of the treaty takes CETA’s interpretation and, ultimately, enforcement out of the hands of national courts and places it in the hands of arbitrators.