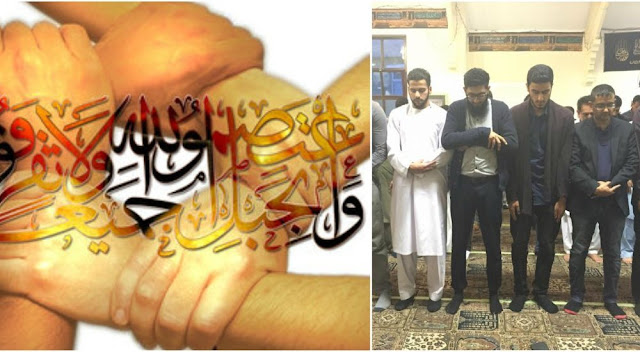 Disclaimer*: The articles shared under ‘Your Voice’ section are sent to us by contributors and we neither confirm nor deny the authenticity of any facts stated below. Kehnedo will not be liable for any false, inaccurate, inappropriate or incomplete information presented on the website.
The word Unity is derived from the word ‘unit’ which means ‘one’. Unity is very important for the safety and prosperity of a nation.
“We can all work, but together we win.”

Unity holds importance for the Muslim nation as well. It is the backbone of any army, because, a single person can be disturbed, distracted and defeated very easily. w=Whereas, when people stand together as one group, it is very difficult and nearly impossible to distract and defeat them. We can take the example of a stick in this case, as a single stick can be broken very easily by anyone, but when a bundle of sticks is bound together, it is very hard to break them. Quran states:-
“Obey Allah and His Messenger (P.B.U.H) and do not quarrel among yourselves lest you lose heart and your momentum disappear. And be steadfast. Allah is the steadfast” (8:46)

Source: The Indian Express
If we go through the current scenario of the world, it can be seen very clearly that the Muslims are being targeted everywhere. Hundreds and thousands of Syrians and Palestinians are dying every day, our innocent Kashmiri brothers and sisters are being tortured and killed by the Indian Army.
Our Muslim brothers and sisters are going through barbaric treatments in India which is completely violating the human rights but still the whole world, even the so-called ‘protector of human rights’ United Nations Organization remains silent in these cases as if it is blind and deaf. Moreover, the irony is that even after all this wrongdoing and injustice Muslims are the ones who are being accused of being terrorists.

Source: The Indian Express
They say that one bad person does not represent the entire society or nation but still, the Muslims are being deported by Donald Trump from America even though they are innocent and are serving the country, earning there to support their families and are not even causing any harm to the country.
In order to survive in this world, we, the Muslims, have to stand together united. We can even improve our economy if the Muslim countries start trading their goods with each other. We should see each other as Muslims, instead of dividing ourselves into more sects or else… we would end up soon! We have to create history instead of becoming a history! Allah says:-
“The believers are but brothers, so make reconciliation between your brothers and fear Allah that you may receive mercy.” Surat al-Hujurat (49:10)
So, we should apply this in our everyday lives, become a family and get united as a nation, because:
“Where there is unity there is always victory”

Sex Tips for Men: How to Be Better in…
What Will Happen to Flash Games?
Top Surprising Benefits of Sales Pres…
World Of Rugs
The East winds of Digital Currency Ga…