Nine-year-old Tyshawn Lee loved basketball.  He took that ball with him everywhere he went.  He took it into that Chicago alley on Monday, November 2, 2015 when Chicago police say gang members lured him there in order to murder him. 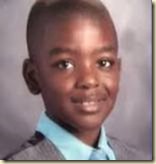 Tyshawn’s “crime?”  He had the bad sense to choose as his father a man who police say is probably involved with a lethal gang called the Gangster Disciples.  Apparently, Pierre Stokes, Tyshawn’s “chosen” father, has done something so terrible to this rival gang, they felt it only appropriate to execute his child.  Take THAT, Pierre!

As I have come to expect, and so should you, the gentle people of America who despise the Black Lives Matter movement have crawled out of their self-righteous hidey-holes to decry the black community’s failure to curb this insane slaughter that holds hostage Chicagoans and Baltimoreans and Fergusonians and the people of every other urban city where poverty has been studiously concentrated, by design.  The people who are first in line to scream “black on black” crime as a reason to NOT support efforts to stop police departments to prey upon unarmed black people are the same people who fled their once lily-white, lower-middle-class neighborhoods as soon as one dark-skinned family moved in.

Let me be perfectly clear.  There is no reason whatsoever for a grown-ass man or woman to plan the execution of a 9-year-old.  I hope the assholes who planned this murder will be snuffed out as quickly and as easily as little Tyshawn was.  I don’t even care who does it.  The police would be preferable, because that would be somewhat more lawful.  However, in all likelihood, it will be the result of Gangster Disciple retaliation, because that’s what criminals do. Besides, the police don’t seem to be able to do much of anything in the ‘hood about real crime.

Yes, I said criminals.  People who belong to gangs are willful breakers of the law. They are outlaws who don’t even believe in laws unless they are the laws of the streets, which they determine.  But just like in the communities of other skin colors, these criminals do not represent the black community.  They are the scourge of the black community.

We tried.  We’ve been trying.  In fact, we tried so hard in the late 1960s we actually precipitated the draconian drug laws that now have a large percentage of our black men and women sitting in penal institutions for terms far longer than those for some far more heinous crimes.

When the concentrated poverty of inner cities across the nation began to cause serious social problems, especially the introduction of drugs as both a profession and a palliative to the grinding poverty, law-abiding residents in those locations started screaming to high heaven for protection.  They went to the place where we have always thought protection was supposed to be provided – the police and the government.  Black leaders pushed hard to bring “law and order” back to their communities.  And the conservatives in power at the time took that political football and ran with it.  They pulled an end-zone-to-end-zone touchdown.

Have you ever wondered why we hear hardly more than crickets from today’s  black leadership about this terrifying coup d'état taking place in Chicago? For your answer, look no further than the All Lives Matter contingent.  As soon as the black community publicly denounces what The Others like to call black-on-black crime in any meaningful way, the heat is immediately lifted from the excessive force and brutality that is plaguing our people.  In fact, the knee-jerk government reaction to any hue and cry from law-abiding black people could easily result in another fully-sanctioned open season on blacks.

The black community, most of which is concentrated in overcrowded, underfunded and crumbling environments, is between the proverbial rock and a hard place.

White people are truly sick of hearing about how slavery started all this.  That’s really unfortunate, because until such time as the majority of white people accept that as truth, these manifestations of oppression will only get worse.  It took hundreds of years to get there, but once the creation of sprawling black ghettos was completed, the rest was absolutely predictable.  But Americans don’t have time to think ahead.  We don’t know how to analyze a problem to include the consequences of the chosen solution.  We are so busy placing blame, quieting consciences and running for lucrative government offices, we don’t seem to care much about consequences.  Everything is about right now.  And this is the now we have created.

When I began to write this piece, I was really angry with a woman named Karla Lee. She was the one who made the ill-advised choice to allow a gangster to father her child.  She should have been smarter than that.  She should have seen the danger her son was in and protected him.  She is just as worthless…

And then I came to my senses.  She is as much a product of this social malfunction as Pierre Stokes and his fellow Gangster Disciples are. The rules of conduct those of us who are so quick to pass judgment live by have little or nothing to do with the social order in Islands of Poor Black Concentration.  Our rules don’t and never have worked for those residents.  They can’t even escape their hell on Earth through education, as we once believed.  Their schools are nothing more than holding tanks for mass incarceration.  Their secondary education is not college, it is the penitentiary.  If and when they ever leave, they graduate as fully-socialized predators and survivors.

Do I believe in miracles?  Do you?