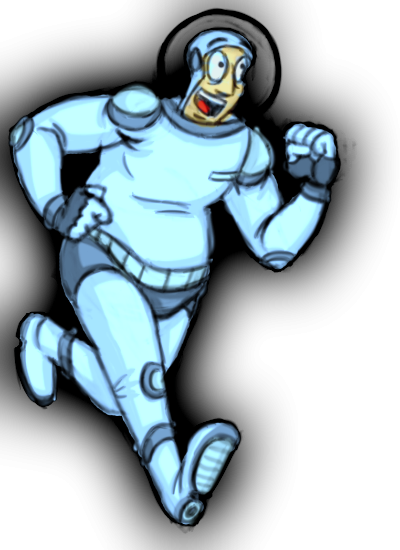 Quoting a caller named Sid about a possible alien encounter he had in Abilene, Texas on July 4, 2007.

“I got an encounter I want to tell you, back in 2007. It was 4th of July and I was at my father-in-law's house in Abilene. Everybody went into the house and we (Sid and father-in-law) stood outside in the yard cooking something. And as I was talking to him, I was looking down the road and I seen something running down the middle of the road coming around the corner. It just stayed right in the middle of the road. It's very unusual for somebody to be running down the middle of the road like that and so I'm standing there talking to my father-in-law and it started getting closer and every-time I looked up, it started getting more clearer to me and I couldn't believe what I was seeing. When it got down there by my father-in-law's fence, the fence-line, the dogs started chasing it, barking at it. And then my father-in-law looked up and seen it and he looked at me, and I looked at him, and at the same time, we said: 'Did you see that?' It had a helmet on, like a space helmet and it was dressed in cobalt glass looking stuff because you could see through it, and you could see it had a shirt on and pants. It had a human form to it. Then it got down there by our cars and truck and I looked on the other side and it never did come out on the other side and I said, 'It never did come on out the other side,' and my father was like, 'Go look!' I'm standing there in the yard and I said 'Hello' and it said something back to me and I can't remember what it said. It wasn't something I could understand, it was some kind of different language or something. And my father kept telling me, 'Go on out there! Go on out there!', so I looked underneath the car. I wouldn't go back there not knowing what the thing was, so I started looking under the car for extra legs, something under there, but I didn't see nothing on the other side so I walked around the corner and there wasn't nothing there. I walked all the way around the car and there wasn't nothing there. My father in law said, 'Did you see it come around?' and I said 'No'.' It just disappeared. 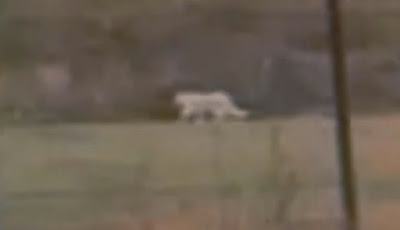 Cattle have been reported injured or missing amid reports of a large, ghostly cat-like figure roaming the pastures and tree lines along Farm Road 130 near Hughes Springs, Texas, according to KLTV.

Landowner Mitchell Cox, who captured the huge cat on cellphone video from about 50 yards away, believes it’s an albino mountain lion, one of the rarest sights in nature.

“When I first saw the white animal, the first thing I thought was, it was a dog,” Cox told KLTV.

Biologists at Texas A&M Overton tell KLTV that it’s unlikely a mountain lion would be moving around and being seen during daylight hours, so they believe it’s a very large domesticated cat until more evidence proves otherwise.

His video appears to substantiate his claim, as the white cat-like figure is seen leaping over a six-foot-wide creek. The fact livestock have been missing adds to the mounting evidence of an albino mountain lion.

“The cat jumps across about a six-foot creek there,” investigator Hershel Stroman of the Morris County Sheriff’s Office told KLTV. “At first, my initial thought was it was an edited video, but upon seeing it and talking to people, I believe it’s true: a white albino mountain lion.

“I’ve seen mountain lions around this area, but never a white one.”

It is true that mountain lions are stealthy. They tend to see you before you see them if indeed you ever see them. But how stealthy can an albino mountain lion be?

Cox isn’t the only one to have seen the white cat-like figure. His other neighbors have, too.

“Our kids come in the house all the time saying they seen a big cat, and we just passed it off as a big field cat,” Jerry Dorough told KLTV.

No doubt, the day will come when the true identity of the ghostly, cat-like figure is positively identified. Hopefully without incident. Watch video at Sightings of a mysterious, ghostly cat-like figure baffle East Texans

NOTE: The gait of that cat reminds me of a tiger. I wonder if it's an escaped pet? Lon

Voodoo Holiday With Prayers and Sacrifices

The national voodoo holiday in the West African country of Benin had a distinctively political accent this year as practitioners from Africa and the Americas gathered on Sunday to offer prayers and sacrifices for peace.

Hundreds of followers of the traditional religion gathered in the Atlantic coast town of Ouidah, once an important port in the slave trade, to pray for calm during the tiny country's presidential election scheduled for February.

Benin has no history of significant electoral violence. But David Kofi Aza, a well-known priest, said last month that an oracle named Fa had predicted dozens of deaths in post-electoral violence because the loser would refuse to cede to the winner.

The oracle did not reveal how the crisis would be resolved, Aza said.

At the ceremony in Ouidah, spiritual leader Daagbo Hounan Houna II appealed to the dead to help keep order during the vote. "The elections will pass in a peaceful manner in the name of the bounties of the ancestors," he said.

Further inland in Savalou, the hometown of Prime Minister Lionel Zinsou, priests and dignitaries set a chicken on fire at a ceremony before spreading its blood and palm oil on a fetish made out of cowrie shells and sand.

The election campaign has been overshadowed by a controversy over the ruling party's choice of Zinsou as its candidate, a pick approved by outgoing president Thomas Boni Yayi.

Last Tuesday, politicians from the opposition and dissidents from the ruling party met for discussions on the formation of a coalition to prevent Zinsou's run.

Zinsou is both French and Beninese and spent a large part of his life in France. Critics claim he is an outsider without a true understanding of the realities of life in Benin.

But he does enjoy local support. "Diversity must be a richness and exclusion is a source of war," Gbaguidi Tossoh, the king of Savalou, said at the ceremony there.

Boni Yayi has been president since 2006, when he took over in a peaceful transition of power after 28 years under Marxist coup leader Mathieu Kerekou, who gradually came to embrace multiparty democracy.

Aside from Zinsou, prominent businessman Sebastien Ajavon and Abdoulaye Bio Tchane, a former senior official at the International Monetary Fund and a 2011 presidential candidate, have officially declared their runs for the office.

The celebrations of voodoo, a traditional African spirit religion that spread to the Americas with the slave trade, were declared a national holiday in 1992.

This year they drew practitioners from nearby countries such as Togo, Ghana and Nigeria and locations as far away as Haiti, Brazil and the United States.

"For nearly 15 years, I have not missed this celebration," said a man in his 60s from Brazil who gave his name only as Antonio. - On Benin's voodoo holiday, followers pray and sacrifice for peace

A new analysis of a video taken 8 years ago has suggested an alternative explanation for the sighting.

The footage made headlines back in 2007 when Gordon Holmes, a former university technician from Shipley in West Yorkshire, stopped at the side of the road to record what appeared to be a large black creature swimming through the waters of Scotland's enigmatic loch.

Now however US computer expert Bill Appleton has carried out a new analysis of the video and believes that what it actually shows is a group of gigantic eels measuring up to 12ft long.

"I am extremely grateful to the various experts who have analysed the footage and provided me with their opinion of the creatures’ identity," said Holmes. "Since eels do appear strange, ancient scary-like beasties, that may explain several of the Loch Ness sightings over the centuries." - See more at: http://www.unexplained-mysteries.com/news/290359/does-famous-nessie-video-show-giant-eels#sthash.8Wx7L4pB.dpuf

Most Bizarre Conspiracy Theories of 2015

The Pyramids and the Pentagon: The Government's Top Secret Pursuit of Mystical Relics, Ancient Astronauts, and Lost Civilizations

The White Devil: The Werewolf in European Culture


Your help is appreciated - Thanks!
Advertise with Anonymous Ads