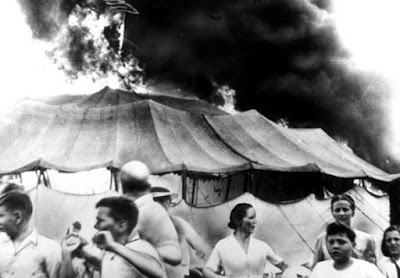 I was perusing the internet and came across a few examples of bizarre circus deaths. So I decided to look further in order to find the oddest of the odd:

SUICIDE OF A CLOWN

Charles Rench was a beloved clown with W.W. Cole, P.T. Barnum, and the Irwin Bros. He was so successful that in 1886, at the age of 16, the Barnum circus presented him with "a magnificent gold-headed cane" as part of a special ceremony in front of a packed house in his hometown of Columbus. Unfortunately, Rench sustained serious injuries after a fall during a performance which ended his career.

CLOWN BURNS HIMSELF TO DEATH / Columbus, Ohio, June 25. - Charles Rench, a well known circus clown, who had been in ill health, piled papers on the floor of his room here yesterday, applied a match, and then lay on the flaming pyre. His sister, with whom he lived, attempted to drag Rench to safety, but he resisted, and she was badly burned before she abandoned her efforts at rescue. He was burned to death. (New-York Tribune, 1908)

In 1870, the traveling James Robinson & Co. Circus decided to drum up some publicity for their upcoming show in Middletown, Missouri, by having their band and some lions give a sneak peek performance during the parade through town. Despite being warned not to for multiple reasons, the band decided to sit on top of the lion cage during the parade. The roof of the cage couldn't support the 10 band members and they fell through. Seven of them were killed in front of horrified parade watchers.

DWARF EATEN BY A HIPPOPOTAMUS

A dwarf nicknamed Od has died in a circus accident in northern Thailand. According to the Pattaya Mail, he "bounced sideways from a trampoline and was swallowed by a yawning hippopotamus which was waiting to appear in the next act. Vets on the scene said Hilda the Hippo had a gag reflex that automatically caused her to swallow." The vet said it was the first time the hefty vegetarian had ever eaten a circus performer. "Unfortunately, the 1,000-plus spectators continued to applaud widely until common-sense dictated that there had been a tragic mistake" (Melbourne Herald Sun - July 16th, 1999)

"Massarti the Lion-Tamer," AKA Thomas Maccarte, entered the lions' den for the last time in 1873. One particular lion named Tyrant had been giving Maccarte him trouble and even bit him on the hand the same week. Maccarte slipped on something and fell to the floor of the den, which is when Tyrant saw his chance to attack. His attack seemed to incite at least three of the other lions into joining the melee. Maccarte's injuries were fatal. Unfortunately for him, he didn't die instantly...survived long enough to talk to his coworkers by requesting that no ambulance be called. He knew that he would not survive.

Zishe Breitbart was a blacksmith from Poland who became one of Europe's most famous strongmen. His forte included biting through iron chains, bending bars, and even breaking horseshoes in half with his bare hands. In October of 1925, Breitbart died from complications from a stunt he performed while touring Germany. Using only his bare hands, Breitbart would drive a steel spike through 5 inches of solid oak. During his final performance, Breitbart drove the spike through the wood with such ferocity that he ended up driving the spike into his knee. Eventually he suffered blood poisoning and underwent nearly a dozen operations...resulting in the amputation of both legs. The amputation was not enough to stave off the infection and he died in Berlin at the age of 42. 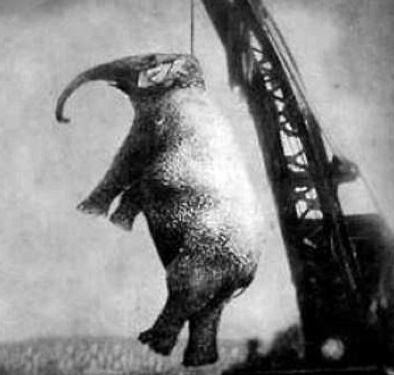 On September 12, 1916, Mary the Elephant trampled her handler Red Eldridge to death. There are various accounts of what led to the attack...from Eldridge prodding Mary with a stick and infuriating her, to speculation that she was simply bored. The people of Kingsport, Tennessee demanded retribution for Eldridge’s death, so it was decided that Mary would hang for her crime. On September 13, a crowd of 2,500 people (mostly children) gathered to watch Mary’s execution. Mary was hung from the neck by an industrial crane. However, the chain around her neck snapped and she slammed to the ground, breaking her hip. A heavier-gauge chain was used to hang Mary for a second time, and she swung for half an hour before being dumped in a hastily-dug grave.

Although there were no human fatalities, the Cleveland Circus Fire of 1942 was a horrific event that caused the deaths of over one hundred circus animals. A fire of unknown origin started near the menagerie tent of the Ringling Brothers and Barnum & Bailey Circus. Spectators and circus workers easily escaped the flames, but the fire spread so quickly, it became impossible to save all of the animals. Nine cages—filled with lions, tigers, and zebras...burst into flames. Some animals were able to escape the blaze, but twenty-six others were so badly burned they were put down by policemen with machine guns.

This tragic event is arguably the most well-known on my list...due to the scale of the fire and the extensive loss of life. On July 6, 1944, a small fire began in the southwest sidewall of the Ringling Brothers and Barnum & Bailey big top circus tent. Because the tent was water-proofed with paraffin wax and gasoline, the fire spread rapidly.

The huge crowd of seven thousand spectators panicked and rushed towards the exits. But two of these exits were blocked by chutes used to bring in circus animals...and in the ensuing stampede, circus goers were trampled, crushed, and asphyxiated under the weight of fallen people. As the flames spread, other spectators simply burned to death, or else died as a result of smoke inhalation. In a panic, some people tried leaping from the bleachers to avoid the fire...but this attempt to escape actually killed more people than it saved.

In the end, an estimated 169 people died and more than seven hundred were injured.

The Greatest Shows on Earth: A History of the Circus

The Circus Age: Culture and Society under the American Big Top

The Circus Fire: A True Story of an American Tragedy
SUPPORT 'PHANTOMS & MONSTERS' - DONATIONS ARE APPRECIATED


This post first appeared on Phantoms And Monsters: Pulse Of The P, please read the originial post: here
People also like
11 things to do on vacation with out the kids
Why SEO Is The Next Big Thing in the Real Estate Industry
The Queens of Pop: In The Mix
Common Problems with Slit Lamp and Repair Needs
30 Cheap & High ROI Home Renovations (And 5 Costly DIY Mistakes)
It's Time To Rebuild
Well said Mr. PM, We’re racing with time but..
What You Need to Know About Sydney Epoxy Flooring
Nie daj się oszukać, hakerzy z Rosyjskim akcentem atakują