The following report was supplied by cryptid investigator Eric Altman:

On Friday May 20, members of the Pennsylvania Cryptozoology Society and BAPS; investigated the case in Clearfield County of a family claiming to have multiple encounters with a family of Bigfoot creatures on the property. Although our investigation failed to yield any conclusive evidence, we did hear about the families’ claims and alleged sightings. The most compelling encounter was told to us by the families’ 17 year old son, and his experience along with possible evidence to corroborate his alleged encounter. According to the young man, his encounter occurred 4-5 days prior to our arrival. Here is the description of his encounter.

At 4:30am on approximately May 14th, the son arrived home from being out with friends. The truck he drives has a power steering issue and whines, so he shut it off at the end of the driveway and coasted the rest of the way into a parked position. It was at that time he exited the vehicle & heard a guttural grunt. He looked in the direction he heard the grunt, towards a tree across the creek at the end of the driveway.

That is when he claimed he saw a 9 ½ to 10 foot tall creature standing in the creek in front of an old oak tree. He did not provide much description to the creature other than it having a black, leather looking face and hands. He claimed that as fast as he could run from his truck to the door, the creature had ran up through the brush, past old rusty rabbit and mink cages in the direction of the state game lands which the family property borders on and disappeared into the darkness.

The boy claimed he was so frightened that did not stop to unlock the door with his key, but instead, broke through the basement door which also leads into his bedroom. Upon doing so, he damaged the door frame and the lock getting into the house. While in the house, the teenager claimed he could hear the creature come up onto the porch and begin to throw and move around items around on the porch. Some of the items included large unopened heavy boxes that were recently delivered by the post office and an electronic motorized scooter chair which he claimed the creature turned upside down. One of the boxes that was allegedly thrown around was a cardboard box that weighed 200 lbs. Its contents was a wooden yard weather vane. Upon examining the box, that is when he found a large hand shaped impression on the upper portion the box. The young man and his mother showed us the items that were moved around and damaged. We took photos and measurements of the hand print in the box which measured 9 inches from the base of the palm to the tip of the middle finger. The hand was twice the size of the investigators. Unfortunately due to time constraints of interviewing the other family members and searching for any additional evidence we were not able to conduct any experiments in an attempt to duplicate the hand imprint. 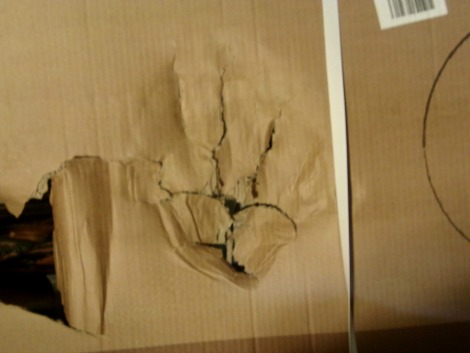 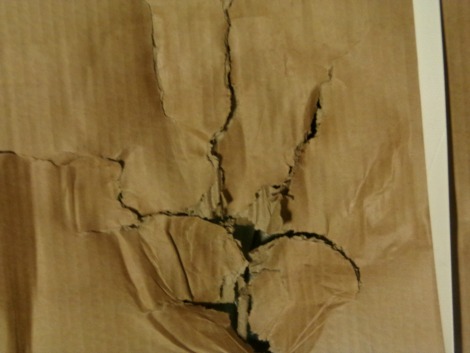 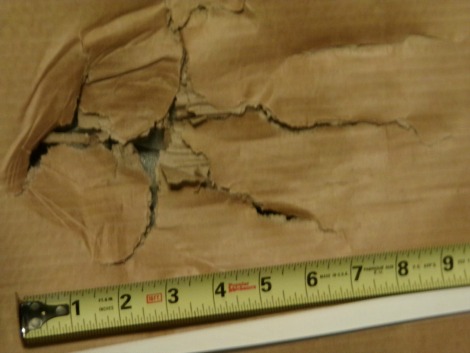 The testimony of the son and the family contradicted each other as the son stated that all the recent delivered boxes were neatly stacked against the wall on the porch. The parents stated the box that had the hand imprint was leaning against the far side garbage dumpster about 15 feet away from the porch.

Of all the family members’ testimony, we felt the son’s experience was the most believable and traumatic as he began to become visibly upset. We could hear the fear in his voice as he fought to hold back tears. We were not able to validate any of the other claims or encounters and we did not find any convincing evidence to prove the family did in fact have a Bigfoot or family of Bigfoot creatures on their property. We did feel that the son did experience something traumatic as it had affected him emotionally. However we also feel that the parents constant watching of Bigfoot television programs and discussing their alleged encounters in front of their son has contributed to his fear and trauma. Due to the sensitive nature of those involved, and for safety and legal concerns of the research teams which were beyond our control, we have decided to cease investigating this case and not continue with the investigation.

The consensus of the research team is that we believe the family believes as to what they saw and experienced. However, we were unable to validate any of the claims and encounters with evidence. The area has a long history of reported activity and we will continue to monitor the area for future and further activity.

NOTE: The Pennsylvania Cryptozoology Society is a group of volunteer amateur researchers objectively investigating claims of sightings and encounters with unknown creatures in Pennsylvania and surrounding areas in an attempt to collect data, information and find rational answers to such claims.

Eerie Erie:: Tales of the Unexplained from Northwest Pennsylvania

Unexplained World of The Chestnut Ridge: A Hike through the Goblin Universe of the Laurel Highlands

Call 570-478-0902
if you have any information on these cases.
Just leave a message with contact number,
or you can write direct to report any strange sighting or encounter at
[email protected]

THE 'PHANTOMS & MONSTERS' NEWSLETTER DEPENDS ON YOUR SUPPORT!