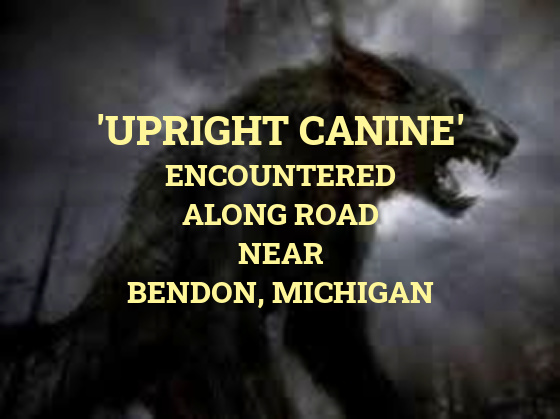 A Michigan man is traveling home at night to Traverse City, when he encounters an upright canine cryptid standing along the road near a roadkill deer. This occurred in Benzie County.

An official in local government filed this report. They asked to remain anonymous:

The situation started around midnight on a Saturday night in 2007 when the witness was coming home from a friend's house in Benzonia, Michigan and taking the back way home to Traverse City. He stated that while traveling on Cinder Road, several miles outside of the town of Bendon, Michigan, he observed a pair of eyes reflecting off his headlights ahead of him. Thinking that it was probably a deer along side of the road, he began to slow down. As he got closer however, he stated that the object was much larger and much darker than a deer.

He said that by this time, he had slowed to around thirty miles per hour and was at that point several hundred feet from the creature which still hadn’t moved. As he approached further, he stated that the only way he could describe the creature was being similar to a very large dark wolf. However he observed that this thing wasn’t on four legs, but was upright his back two legs standing near a road killed deer. He estimated that the creature stood a little over six feet tall and had very dark fur.

He stated that by now, he was going slow enough to bring his truck to a stop in the road and observe the creature which had not yet moved and was still staring at him. He mentioned that for a brief second, he believed that the object was a giant stuffed animal put there as some kind of prank due to the fact that he had never seen anything like this in his life, and that he was able to drive up on it as close as he was, without it having moved an inch. Before he could finish that thought, the creature then dropped to all four legs and sprinted across the road and disappeared into the woods on the other side of the roadway.

The witness was frozen in his seat for a minute wondering what the heck had just happened. He stated, 'Whatever that was, it was for real.' As perplexed as he was that night over what he had seen, he was deathly afraid to go wandering into the woods to investigate further.

The witness was asked if the animal had made any sounds before it disappeared and he said that he did not hear it make any noise. He was also asked if it could have been a bear and he stated, 'Absolutely not.' He is a bear hunter and regularly hunts in the Upper Peninsula, so he obviously knows what bears look like up close.

NOTE: There have been numerous upright canine and other cryptid accounts from northern Michigan and on the Upper Peninsula. Here an account I received a few years ago - 'Ape Man' or 'Dogman' Encountered Near Traverse City, Michigan - Lon

Because of recent revelations involving the winged humanoids (The Unseen Ones), we are asking the worldwide public to come forward with your sightings & encounters. Contact us at
410-241-5974
or at [email protected] - Thanks. Lon


This post first appeared on Phantoms And Monsters: Pulse Of The P, please read the originial post: here
People also like
The Best Ramen in Sacramento
Just Nasty: Pastor Got The Congregation Drinking His Self Proclaimed Holy Water