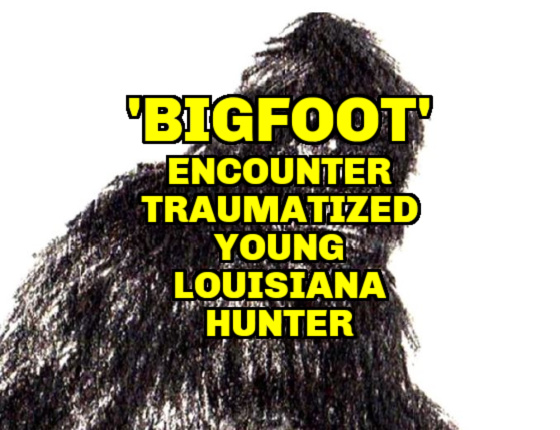 A young Louisiana hunter was out on the first day of deer season. As he is walking, he comes across a Bigfoot standing a creek. The encounter traumatized the hunter, taking precaution in the future.

"It was 36 years ago. My father was a Marine and a tough man. He started to take me hunting at 7 years old. I killed my first deer at 9 years old and by the time I was 12 years old I was hunting by myself. I loved deer hunting and would bow hunt, rifle hunt, and then move onto dog hunting, never missed it.

I was 16 when this happened in Louisiana. It was the 1985 deer season-opening weekend of rifle season and it was going to be cold and high winds blowing, I told my mom I was going to go to the old Rock Creek stand for an early morning hunt and she tried to talk me into skipping because of how bad the weather would be. But I said I can't miss opening day. I made it to the spot I parked my truck well before daylight and started the walk into my stand that was 2 miles away. I made it to my climbing stand before daylight and settled down waiting for dawn. It was cold, like to the bone cold and the wind was blowing 35-40 mph.

I sat in my stand for an hour and a half past daylight when I thought to myself, I'm freezing. I can't stay here any longer, but I didn't want to miss the opening day (I wanted to bring home a nice buck to impress my father). So I decided I would walk toward the creek which was another 2 miles away, hit the creek and follow it to the old duck pond. I got down and started my slow still hunt. It would take me about 30-35 minutes to make the walk, but still hunting is slower so I would say 50-60 minutes.

I got off my stand around 7:30. Adding the 60-minute walk and this encounter happened between 8:30 and 9:00 AM. I believe the very high winds and walking up through the old bluff made it to where I couldn't be seen or smelled. I had made it almost to the creek and had seen nothing, it was like nothing was out in the weather. The wind was howling but there were no other sounds. I kept thinking even the animals are smarter than I am.

Just before I got to the creek there was an old bluff and I walked down into that draw and started walking up to the creek. As I stepped onto the top of the draw and looked at the creek. I saw something sitting on the other side of the creek about 20-25 feet from me. I first thought "Oh man, it's a bear" but then it quickly stood up on two legs and was looking right at me. My mind was trying to process what exactly it was that I was seeing. The creature looked confused and its mouth started to open and close. It had a large mouth. It was clinching its hands, opening and closing them, flipping its hands oddly and it was covered in brown to light brown hair everywhere except for the face and the sides of its legs between the hips and knees. The face was a light color and its skin looked old and sun-dried. It had a large, flat nose, a thick brow line and it had a human-like appearance. But it wasn't human and it wasn't an ape or bear either.

It started to look all around and then turned and started to walk away from me. It would turn its shoulder and its head to look at me as it was walking away. I had a 30-30 rifle in my hands and a .357 Magnum in a holster on my side and I never not once thought about shooting this thing. I quickly turned and started down the old draw and by the time I was down there, this weird, loud noise started up all around me. At the time I had no idea what the sounds were and I was panicked. I now know the sounds were tree knocks and there isn't any way of knowing how many of the creatures were there. But by the tree knock sounds, that were coming from everywhere, they were all around me.

I had 4 miles to make it back to my truck and I remember I was scared, really scared, this thing could have snapped me in half. I knew if it comes after me, my 30-30 would kill it but it wouldn't stop it from reaching me and it would die long after it had already killed me because I didn't have the knockdown power to stop it. I kept thinking the whole way out it's right behind me, it's going to grab me. But in truth, nothing followed me that I had seen. I would run until my lungs felt that they were going to burst from the cold and then I would stop and slow walk, trying to catch my breath before running again.

I made it back to my truck, got in, and drove away. I had to stop some miles down the road because I was shaking so bad, I couldn't drive. That moment gave me PTSD for a long time. It was over a year before I went back into the woods and I didn't go before daylight. When I finally did go back I would be in my tree stand and see something off in the distance and begin to sweat only to see there was nothing there. I was traumatized but I never understood why. The creature did not attack me, it was not even threatening to me.

Back then there wasn't any help for PTSD. I didn't see any doctor. My father was in Vietnam and I talked with him and he told me the things he saw in that war had given him PTSD too. But that he was told PTSD is the outward expression of an internal struggle and with family support, I would get over it and I did.

I then started wanting to see this creature again and I just knew that one day I would get my chance. I never did, 36 years of hunting, camping, and fishing the swamps and lakes of Louisiana and I've not seen so much as a track. When I went back hunting, I kept the 30-30 at home and used a .300 Magnum for a long time and then went to a .270 rifle after seeing what the .300 Magnum did to the deer I was hunting (Too big of a rifle for deer, not big enough for a Sasquatch). I wasn't hunting this creature, the larger rifle was more for my feeling safer. I wouldn't shoot this creature unless it was a life or death situation.

Well, that is my story, take it or leave it, either way is fine by me. I'm not trying to convince anyone Bigfoot real, I'm just telling my story. I swear what I just wrote is true and to the best of my memory. I have no reason to lie or make up such a story and I've not told this story for 35 years. It was about 8-9 months ago that I first told my story on another YouTube video and it was such a relief to finally tell what happened to me on that deer hunting trip." K

Because of recent revelations involving the winged humanoids (The Unseen Ones), we are asking the worldwide public to come forward with your sightings & encounters. Contact us at
410-241-5974
or at [email protected] - Thanks. Lon


This post first appeared on Phantoms And Monsters: Pulse Of The P, please read the originial post: here
People also like
NBA Jam Game Comparison
The Best Ramen in Sacramento
Just Nasty: Pastor Got The Congregation Drinking His Self Proclaimed Holy Water