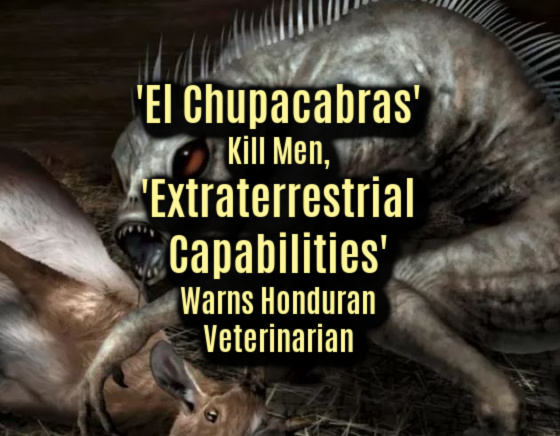 The mysterious death of a handyman from a small village near the town of Siguatepeque, Honduras caused numerous rumors that El Chupacabras killed him. A farmer's assistant was found dead in early February 2019 after being attacked by a mysterious Animal who sucked all of his blood out. Details of the incident are known from the words of neighbors. The truth does not indicate whether they really saw something or their story is based only on assumptions.

Neighbors said that the handyman got tired after a busy day and decided to take a break. He lay down in the shade of a tree next to the stones and took off his shoes. The unfortunate man did not notice that next to his resting place was a hole of some animal, and when he settled next to it, an unidentified animal jumped out of the hole and firmly gripped in his bare foot. The animal did not just bite the man, but began to suck the blood out of it, and soon the worker died from blood loss right on the spot.

The corpse of the man was found by his relatives only at night, when they were worried that he did not come home and went to look for him. According to the relatives, the body of the deceased was completely pale and “there was not a single drop of blood in it.” No further details of the case are currently known.

In 2009, in the district of Esparta, an unidentified predator killed 15 sheep. Local farmers immediately blamed the El Chupacabras for their death. In May 2017, something killed more than 35 domestic animals in the village of Monterrey and the locals were very scared. In April 2018, several farmers stated that the El Chupacabras killed 30 of their cows in less than a month. Less than a month later another person had died in the same way in the same Yamarangile.

According to the media the deceased was a young male named Jovani, who three weeks ago went to a party in the city, and late in the evening he returned to his village. But he never came home. For three days, frightened relatives searched for the young man throughout the district and finally found his lifeless body in an inaccessible mountainous area not far from his native village. Those who found his body immediately became puzzled by how the guy got into this place at all; no paths led there. And then they began to inspect the corpse, to understand from what he died and with horror realized that there was no blood in the body at all. Something had drained him just like a farmer shortly before. No traces of wild animals and generally no strange traces around the body of the guy were noticed.

The national media, La Tribuna de Honduras, collected the testimonies of the residents and statements of the Honduran veterinarian, Eleazar Romero, who warned that a strange being with extraterrestrial capabilities is the cause, because no wild or domestic animal has the ability to kill with such subtlety.

“This attacker kills several animals at the same time and does not eat them, he only makes perfect cuts of his prey and I know that tests were made on these animals in the United States and they were amazed at the precise way in which they have the cuts,” Romero said. In addition to animals, the most disturbing thing is that this "El Chupacabras" claimed the lives of two people in recent weeks.

Several Honduran communities have also been finding dead animals and believe that the "El Chupacabras" is also responsible.

Romero said that he has observed these furtive attacks in cattle ranching communities in Comayagua, Olancho, Francisco Morazán, and El Paraíso, among other departments.

"The case is quite mysterious because it is not known if it is an animal or who it is, because it does not leave traces when it attacks animals such as sheep, goats and cattle," he said.

It chooses to attack the jugular, leaves no blood spill and cannot be suspected of being a bat. “The most a bat can suck is ten cc. or a milliliter of blood, and the animal is bleeding, and in this case it does not bleed.

"In addition, the cattle are left without a tongue and with a perfect cut, and we think that it is a supernatural being ," said the veterinarian.

According to Romero, the "El Chupacabra" does not have the behavior of a tiger, puma, lion or scavengers, because these animals eat the superficial part of their prey.

The shocking thing, he adds, is that "these animals are well cared for, guarded in pens and if this problem arose in mountains or open hills, well, we could think differently."

"My brother - Maritza Mejia from the town of El Negrito, in Siguatepeque - told La Tribuna two dead cows appeared in the pigpen where they are kept, and they appeared dead out of nowhere. They investigated what it was, and it was not possible to find what they were killed from.”

“There are more people affected. I have heard that more cattle have died. They don't know what happened. They are worried," added the woman.

Omar Mejía, his brother, assured La Tribuna that the strange thing was that his dead cows "were healthy."

“They didn't have any injuries. They were healthy, whole,” said the young man; however, he remembers a case in which the animal “was throwing up yellow water and its tongue seemed to have been pulled out.”

This post first appeared on Phantoms And Monsters: Pulse Of The P, please read the originial post: here
People also like
How come so many Christians don’t really know God?
Ecosusi – 15% off Cambridge Backpack
The Best Romantic Honeymoon Destinations in the United States
Tee Grizzley – Buss It All Down [Official Video]