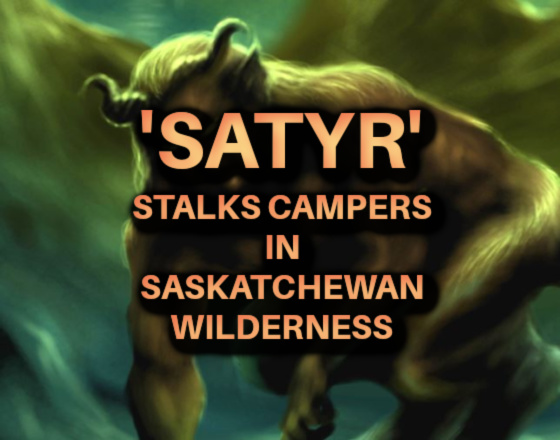 Two friends are on a camping trip in the wilds of Saskatchewan. They begin to experience foul odors on several occasions, realizing that they are being followed. They later encounter a Satyr-like being.

A Guide To Visiting Antigua, Guatemal…
How come so many Christians don’t rea…
The Best Romantic Honeymoon Destinati…
Tee Grizzley – Buss It All Down [Offi…

The following report was recently forwarded to me:

"I had planned a 3-day trip up north, for the coming spring, camping in the wilds north of the Rural Municipality of Canwood, Saskatchewan, Canada. We had planned this trip since Christmas. We'd assumed the snow would be completely gone, but our trail was really slushy, and it was very cold. So the original 3 nights was cut to 2. We saddled up our horses and headed out.

The first tip-off that this trip wouldn't be fun was our horses. My trusty old white gelding was off his rocker. He'd never been aggressive, ever. But he was wailing, bucking, and biting the moment we got onto the trail. My friend's horse, who was usually the energetic one, stayed completely silent and hung his head the whole way to the first stop.

When the sun started setting we found a patch of trees to make a pen around. We use this electrified cord that connects to a battery. Then when I unsaddled my boy and put him in the enclosure, he calmed down and grazed along side his buddy. While I tended the horses my friend set up the tent, and noticed that my bed roll was gone, along with my hat. This made no sense, as I had tied them to my saddle earlier. So I looked around and couldn't find them near us. Then I went back to my saddle and noticed that the leather cord that tied the items down had been crudely sawed in half. I thought it had snapped along the trail.

I walked up from the small valley we were in and looked around. I found my hat about 80 feet from where we had followed the trail in. I had thought it maybe flew away when I was riding, until I picked it up. It stank, terribly! Really, really bad. It smelled like a mix of burnt hair and rotten milk. I held it far away from me and went back to the camp. When I got there, my friend said that he left to chop wood, came back, and the boots he left outside of the tent were moved and stank too. With the same smell. By this point we assumed a skunk was around. But it did not smell like skunk, my friend pointed out. Indeed, it was way more putrid. It was so bad we resorted to piling snow on the items just to block the stink.

My friend began getting scared wondering if an infected wolf was out there. I laughed because I knew this area well, and no wolves live around there (too many farmers with shotguns). Besides that, no animal, other than a skunk, would so thoroughly stink up the place. I thought it may had been a small animal that was sick marking its territory. I've seen coyotes do similar things. But coyotes would never come that close to humans/foreign objects. But we dismissed it as harmless and went to bed.

The next morning we saddled up the horses and noticed that my friend's mare was covered in leaves. But they stuck to her skin with what looked like tree sap. She got really angry when we peeled them off, even trying to bite me, as if she was protecting them. We looked around and couldn't find any sap leaking, and my horse was still clean. This was the point when my friend brought up woodland creatures/spirits and how they're known to do this. I really don't like to believe in such things, but the way that his horse had protected the leaves and was licking at the sap made me wonder. It'd be nice if it was a good omen, because my stinky hat certainly was not. My poor friend had to wear those boots, too. Yuck. But we rode on and set up another camp the next night.

We settled in without anything unusual happening. The horses were calm, the wind had settled, and the stench had almost gone from our stuff. But then I went to the relieve myself at about 3 am, and before I turned behind a tree, I smelled the same rancid odor as before. I was nervous now, because whatever was making that foul odor had followed us. I was really scared that it may have been a cougar that wandered too far south because of the long winter.

I went back and grabbed the small hunting rifle we brought, and told my friend were I was going. I went around a tree and finished my business, then got back up and looked around, gun on hip. A shadow moved slowly behind a tree about 40-50 feet away. I hummed lowly, hoping to hear it move/breath so I could figure out what it was. The thing perfectly echoed my melody, but it had a guttural sound to it. Okay, definitely not a cougar. But my heart began to pound as I realized that nothing could do that but a person. I yelled, "who's there" and then the rotting odor came back. So strong that I began to heave. My friend was calling out from the cabin for me. I kept my eyes on the tree the thing stood behind and called out again, covering my nose. The leaves crunched and it hummed again. I was beginning to cry and back up towards the tent. The horses were letting out really low, rumbling nickers, which made me more uncomfortable because horses only do that when they're happy. And I certainly wasn't.

My friend ran to my side just in time for me to keel over and vomit. He also was on the verge of sickness, but he pointed the flash light around and yelled out into the trees. The thing ran, the leaves crunched behind it. And I kid you not, what I saw looked like a man, but with an animal's head. It was so dark, so I might be wrong. But, dear God, I know what I saw. It looked like a Satyr being from Greek mythology. It was about the height of a man, its legs looked like those of a horse or goat and its limbs were skinny. And it was hairy, especially on its head." BC

NOTE: I rarely come across a Satyr or Centaur sighting or encounter, but they are known to occur in North America. In most instances, these incidents occur near Native American or First Nations communities or reservations. This particular encounter was not far from a Cree community in Canwood. Lon

This post first appeared on Phantoms And Monsters: Pulse Of The P, please read the originial post: here
People also like
A Guide To Visiting Antigua, Guatemala: The Best 5 Things To Do And See
How come so many Christians don’t really know God?
The Best Romantic Honeymoon Destinations in the United States
Tee Grizzley – Buss It All Down [Official Video]