Mimic? Odd Voices in the Night 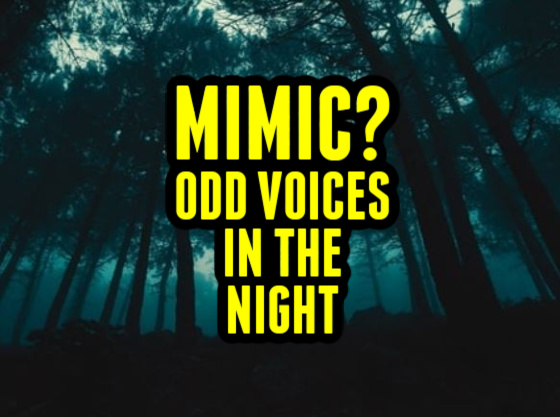 Two friends are in the car outside the one friend's house when they start to hear an odd voice & gibberish coming from behind a nearby fence. They could not understand or determine its origin.

"I know I definitely encountered something. So the friend who I share this experience with lives in New Hampshire and swears his house/neighborhood is built on a supposed Native American burial ground. I don’t know if that’s actually true but his entire family backs him up and it’s definitely relevant to the story.

This took place about 2-3 years ago during the summer after we’d both graduated high school. His house is in a small neighborhood in a fairly wooded area and has this long driveway that goes up a small hill. I pulled into this neighborhood around 12:30 AM about to drop him off after we had been hanging out all day.

The thing was that neither of us actually wanted the night to end. At that point since neither of us were tired yet, and also because we live pretty far from each other. So it’s not like we were able to hangout super often. But with that being said, there wasn’t really much we could do with his small New Hampshire town not exactly being known for it’s night life. We couldn’t do much inside his house either since his whole family was asleep. So, I came up with the idea to listen to creepypastas in the car since we were both just starting to become interested in the paranormal at the time.

We parked at the end of the road and I introduced him to Ansari’s goatman story. If you aren’t familiar, it’s basically this really creepy story of a skinwalker trying to secretly incorporate itself into a large group of friends camping in the woods by acting like it’s one of them. We listened to the whole thing, and it’s pretty long, so by the end we were both tired enough to call it a night. I turned around and pulled up his drive, and we somehow ended up outside my car chatting in his driveway.

His upper driveway area is situated adjacent to his neighbor's backyard with a tall white fence in between (not the kind you can see through). I was leaned up against the hood of my car parked along this fence and we were just shooting the sh*t talking about the goatman story we just listened to, and also about how creepy his neighborhood area is in general. When we stopped talking before saying our goodbyes I remember it just being absolutely dead silent. No crickets or anything. We started talking again to wrap things up, the typical “well hit me up whenever if you wanna hang out again,” yada, yada. I don’t remember which one of us was talking at this point but whoever it was got interrupted when we both heard a voice come from directly behind the fence.

Now, I don’t remember any specific words. What I know is that it sounded like a person trying their absolute best to formulate a sentence, only with the result being a bunch of really weird sounding gibberish. The creepy thing about it though was the way it spoke. It basically interjected it’s way into our conversation. Like you know how you sort of enunciate your first few words to make sure you don’t get cut off when you’re with a group? That’s exactly what this thing behind the fence did, except in pure gibberish.

It was so f*cking scary because of how close it was to us. It sounded like it was standing right behind the fence, 1-2 feet away. We couldn’t see it, but if there was no barrier in between us, it literally would have been standing right there, like it was trying to be the third friend in our group or something. It spoke for about 2-3 seconds, and as soon as it stopped, me and my friend both snapped our heads back from where we heard it to look back at each other. A split second went by and then he immediately sprinted into his house while I scrambled into my car. I almost crashed backing up as fast as I could down his driveway.

All I could think about during the drive home was how things seemed to add up, with his house supposedly being on Native American burial ground, and with the fact that we had just been listening to a skinwalker/goatman story and were discussing it out loud for a short while (apparently speaking of these sorta things can attract them). It was also around 1AM when we heard it, and pitch black in his neighbors yard.

My friend face-timed me the next day and he told me his neighbors are old and docile, definitely not the type of people to even be awake that late, never mind stand outside in the dark and try to freak us out. And we both know what we heard out there was a clearly human sounding voice.

We’ve also both had several other experiences in and around his house that some would probably think are scarier than this one (him more so since he lives there), but for whatever reason, this voice just sticks out the most when I think of them all.' JM

Mimic? Odd Voices in the Night