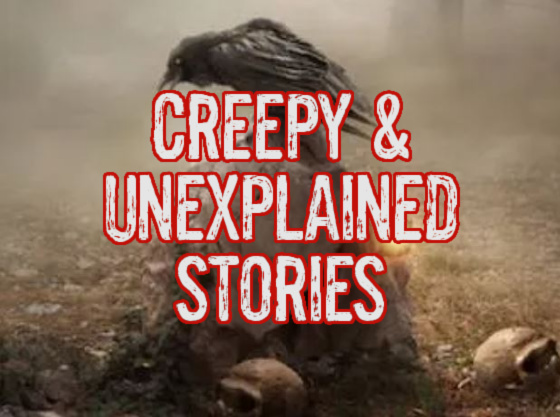 Occasionally, I come across creepy & unexplained stories from everyday people...witnesses who have no idea what they encountered. Tell me your story.

I recently came across the following accounts:

"Between my boyfriend and I, we have two very large dogs. One is a 95lb male German Shepherd, and the other is an 80lb male Husky/GSD/Mal mix. Because the two of them are really big and strong, I can’t walk them both at the same time. I rarely walk them alone, but on the off chance I do, I walk the GSD while the other one stays back.

A few weeks ago I went on a morning walk with our GSD while my boyfriend was at work. It must have been around 10AM, so it was pretty bright outside, although a little cloudy and cold since Colorado weather is starting to get cooler. I was walking through the little neighborhood towards a trail that we always take. It leads to an open space where we usually walk the dogs. We take this trail pretty frequently since the trail is right in the neighborhood.

As we got to the area where the trail begins, our GSD started going crazy. He’s usually incredibly well-behaved on walks and has really good leash manners, but he started barking and growling and jumping. I have no idea what he saw, and I couldn’t see anything. I kept telling him it was okay and tried to calm him down, but then all of the brush up ahead suddenly moved as if a large animal had run through it. It made me super nervous since I couldn’t see anything, and I was alone, so we turned back and went back to the house. I didn’t think anything of it until a few days later.

During the night a few days later I heard something while we were trying to sleep. We played it off as the house settling, since the weather is getting colder, and left it at that. The next day there was a decapitated rabbit in the driveway up near the garage door and the front porch. The head was totally gone, just the body laid there, and there was a lot of blood in the driveway.

I can’t say for certain, but I have a feeling that whatever animal it was that we came across followed us back home and did that. We haven’t seen anything since, but a few days ago I noticed some fresh blood next to the old spot that we haven’t been able to get out of the cement. I took a picture because I wanted to see if anything else changed. I’ve been feeling nervous any time I go outside to let either of the dogs out at night. What sort of animal would do that and take the head of a rabbit and leave the body basically on the door step?" TA

"3 years ago I went camping with my family and one other family for a total of 6 people, including two children. We rented nice cabins in the Beavers Bend, Oklahoma area and had a great time except for this one thing. My son and I were walking behind our cabin. My son was and still is super big into knock, knock jokes and always laughs after the punch line. He laughed, then I laughed and a third laugh came from out of the woods. "Ha Ha." A raven, I guessed. I never saw it but I assume it was a raven. Every time my son would say 'ha ha' the raven would repeat it.

At first we followed it, but I got off trail and had to turn around. My son called out to it the entire time I have it on camera. The raven always answered HA HA. It followed us back to our cabin and the other family also interacted with it. it wasn't around in the morning." KM

"I live in southern Missouri, middle of nowhere, only a few neighbors that live several hundred yards away and are pretty old. Nobody is usually out, it is winter so they are never outside and it gets dark around 6pm. It was 8pm and I was in my shop working when I heard a whistle in the tune of a song sounding like it was just outside my shop. Nobody had been around or I would've known. It went on for about a minute and I got chills down my spine and a sudden fear rush over me.

So I ran inside to get my wife to come out with me in case it happened again. But it never did. I was wondering if anyone else has had any similar experiences with this or know what it could've been." OF