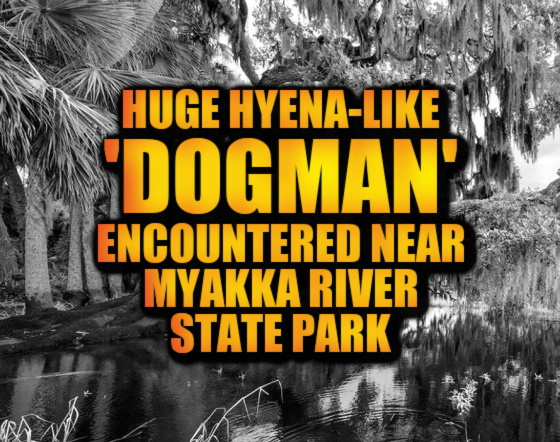 A Manatee County, Florida man encounters a huge hyena-like quadruped canine near his home. His two Pitbulls were terrified by the presence of the 'Dogman' cryptid.

"Let me say first and foremost, I’m a man of logic and explanation. I never before believed in ghosts or other cryptic beings, but something happened the other night that really made me feel weird.

So I live somewhere in between country and town here in Manatee County, Florida near Myakka River State Park and see an abundance of wild life. Foxes, coyotes, raccoons, all very normal to see. Since there being a large fox population around here and most people having chickens, everyone has large dogs, including me. I have a 70 pound male and a 60 pound female Pitbulls. They’re fearless. They know this is their property and they protect it as such, alerting me if they hear something. And if they do, I open the door and they run out to chase off whatever it is.

The other night, I woke up randomly and it was disturbingly quiet outside. Like not a single cricket. And my dogs were not on my bed like they usually are. All of a sudden, a howl like I never have heard went off like a siren that sent a chill down my spine. Like a deep yell almost, but definitely from an animal. I turned the lights on in my house to see my Pitbulls at the back of their dog crate shaking! I’ve never seen the look on my dogs face like that before. Purely terrified. So I turned all the lights back off grabbed a flash light and looked out my back window. What I saw about 200 yards off by a tree line near the back of my property was a dog 'thing.' I vaguely saw it, but it was very similar to a hyena build with a large amount of fur on its neck, like a mane almost and skinny back legs. It’s head looked very wolf-like, with erect ears and a large skull. It was fucking huge. It was so black it was hard to make out distinct characteristics, but it’s presence scared basically any living thing that was around it seemed that night.

The next morning I went to the spot I saw the animal, but saw no tracks or hair or anything. But I know what I saw and never saw anything like it before. Has anyone in Florida seen anything like this? We’ve been having a lot of dead dogs in the area. Dogs that are large and are being killed by something. Other people think it’s the coyotes or a feral dog, but I think it’s that thing I saw. Just seeing my dog so terrified really scared me." MD