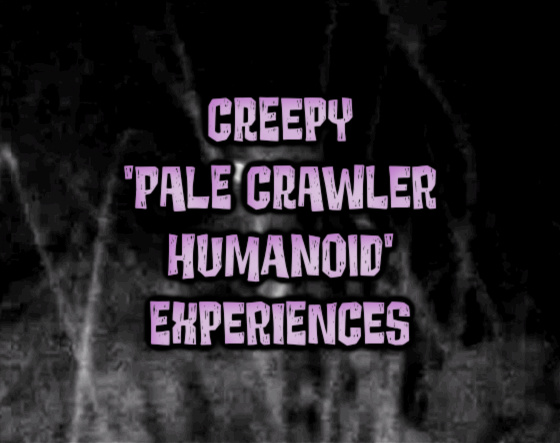 3 separate accounts that describe possible encounters with pale crawler humanoid creatures. I'm currently writing a book on this phenomenon. Have you ever experience a similar entity?

I recently came across the following accounts:

"This happened a few years ago when my friends and I were in our junior year of high school, around 2018. There is a DOW/National Forest area northwest of our small western Colorado hometown. This used to be Ute land before the Meeker Massacre happened and the natives were forced from the land. Being teenagers, we would frequent this area in our trucks to have bonfires, shoot targets, drink, smoke, fornicate, etc., without having to worry about law enforcement crashing our party.

One night we were having a small bonfire with a group of 4 of my close friends. It was a pretty quiet night. I had picked everyone up in my pickup truck so it was the only vehicle available, and the road to the clearing was a bit treacherous, so we had to be very careful to not get stuck in the mud or trees.

Throughout the night we kept hearing what sounded somewhat like an owl, but almost like someone impersonating an owl. On top of that, owls are fairly rare in this part of Colorado. It's a very dry climate, more home to vultures and mountain lions. We heard the noise around 5 times throughout a 1-hour span, and it quickly devolved from a "ooh-ooh" to just a singular "ooh" noise, similar to a gorilla sound. At this point, we were concerned, and one of my buddies taunted whatever was making the noise by repeating it back into the tree line. At this point, the sound was immediately repeated, much louder than before, as if it was just behind the tree line. We about sh*t ourselves, and everyone scrambled to the truck.

I hauled ass as much as possible back to the main road. The main road was still washboard gravel, so I tried my best to channel my inner rally car driver to get us the hell out of there. On the drive down the mountain, one of my friends was riding shotgun and the rest were sitting in the bed, facing backwards. As we rounded a curve, chaos ensued. I heard screaming from the bed of the truck, and my friend, sitting shotgun, nearly sh*t herself about whatever the hell was happening back there. Instinctively, I slammed on the brakes and looked in the rearview. I didn't get a good look, but I can only describe it as a skinny, hairless, humanoid creature with an arched back sprinting across the road behind the truck on all fours. No coordination to its movement, it moved as if it was an old man trying to bear crawl at 2x video speed. I barely had time to process before I was being screamed at to hit the gas.

We finally got off the mountain, and my friends in the back of the truck appeared shell-shocked. I asked them if they saw what I saw and they refused to answer, only saying, "get us the f*ck out of here!" It was only afterwards, when we were at our friend's house, when they felt comfortable talking about what they saw, and everyone described it the same way. All fours, fast as hell, and humanoid (2 of the three described it as having long creepy-ass fingers), eyes locked on the truck as it crossed the road. They say they saw trees and bushes moving as we drove down, as if it was trying to catch up to us.

4 years later and this story still makes my hair stand on end when I tell it. In addition, other weird things began to happen in that forest after nightfall. We personally encountered a goat that had been killed by something, feet straight up in the air, stomach slashed in 6 equal cuts, and head nowhere to be found.

I moved out of this town 3 years ago, but whenever I come to visit it creeps me out. I refuse to enter that area after dark, even towards sunset." EG

"I walk my dog at night during the summer because it's too hot for him. A couple weeks ago I was taking him on our normal route. It was probably around 11:30 on a clear night. The road we were on is kind of dark. Every other telephone pole has a light unlike the other roads in the neighborhood that have one per pole. As I'm walking I notice that it was strangely quiet. The crickets are usually still going until about 12:30 AM but there wasn't really anything. No wind, no insects, no people.

I notice the silence but don't really think much of it until I hear a loud rustling in the bushes around a tree we walked past no more than 2 minutes prior. I thought it was no big deal, I've run into plenty of wildlife in the neighborhood. Deer, raccoons, and possums frequent the area and like to roam out of the woods at night. My dog heard it but lost interest after a couple seconds. I turn around and keep walking, but I hear it again. This time, when I turn around, I see the leaves moving at the top of the tree. Not a small amount of leaves either. It looks like someone has climbed up into the tree and jumped up and down on a limb. At this point I'm watching the tree and so is my dog. His fur was standing on end and neither of us could see anything. Nothing moves. Not even the wind blows the tree around.

We turn and get the f*ck out of there. I don't hear anything but it feels like we're being watched the whole time, even after rounding the corner on the street. Reading some of the possible pale humanoid encounter stories. this seems similar. I don't really believe in cryptids or in malevolent supernatural beings, but I really just can't explain what I saw. Am I just overanalyzing the whole situation?" W

"I continuously encounter a pale humanoid creature and I’m scared it’s for a reason. I live on an Ojibwe reservation in a very rural area in northern Wisconsin that is heavily wooded.

One night, two summers ago, I was coming back from my grandparent's house with my ex-boyfriend. We saw this thing on the side of the road that looked like a naked person with its back turned to us. Its skin wasn’t like a normal human, it was more like buckskin. It didn’t move. We both saw it and freaked the f*ck out. We still would talk about it sometimes, but we didn’t see anything else after that. Until tonight.

I am a wreck. We have finally broken up. He kicked me out. I was driving to my grandparent's alone with my cats and all of my sh*t packed into my car. I saw reflective eyes and thought “deer” so I slow down. But it wasn’t a deer. I could have honestly written it off as that if its upper body hadn’t moved. It was on two legs, tall, muscular, and had that same buckskin appearance. Now there’s no way this was a person, it was freezing rain and in the middle of nowhere. I’m scared it might recognize me. Has anyone else experienced this?" MP