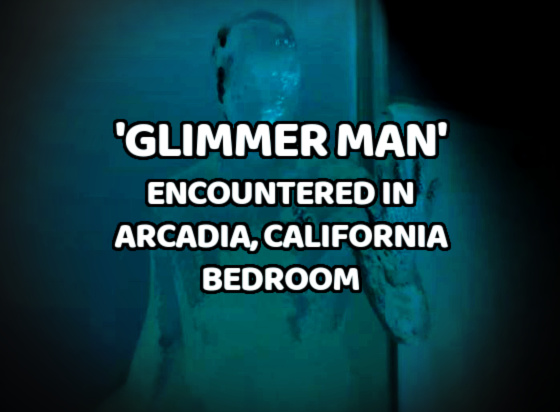 An Indonesian student, living in Los Angeles, encountered a translucent humanoid sitting on the bedroom floor with its legs crossed and facing the opposite direction. Was it a 'glimmer man?'

"This happened in 2007. I don't remember the exact date. I was an international student (from Indonesia) studying interior design at Art Institute College, located on Wilshire Blvd in Los Angeles (now moved to North Hollywood). It was a stressful college life for me. I had a hard time catching up with the workload of assignments. I missed many assignment deadlines. I felt so stressful that I didn't go to class if I didn't have anything good to show and present during the class.

While I was studying there, I used to live in a newly built, 2 story town house in Arcadia, near the Santa Anita shopping mall and the horse racetrack. My older sister used to live in the same house, but in early January 2007 she moved out from the country after she finished her study. So I was alone.

When I was very young, like 5 years old, I had many nightmares and was able to see bad things inside and around my childhood house. Almost every night I woke my parents and siblings up with my screams. Thank goodness the regular nightmares stopped when I was about 12 years old. The most scary thing I saw is a pair of glowing red eyes attached to a large black, ape-like body. It was above me while I was laying on the bed sleeping. The red eyes were less than a foot distance away from my face! I felt so terrified and paralyzed, I let out a faint shriek when I woke up and saw that thing staring at me. I pulled up my blanket and cover my face while that thing is still staring! Later I learned that Indonesian people calls it a Genderuwo.

Right back to the topic. One late afternoon or early evening, after all day staying inside my bedroom watching TV and basically done nothing productive, I wanted to go to the kitchen downstairs and make something for dinner. When I opened my bedroom door, immediately I saw a translucent humanoid sitting on the floor with its legs crossed and facing the opposite direction to my bedroom's door. When it noticed me, it started to get up from the floor and turn its body to face me. It was a rather skinny with long arms and clearly defined outline (just like the cloaking alien in the 'Predator' movie, only smoother I think), about maybe 5 feet tall. I remember instantly feeling a very negative, malicious energy from that thing. I then quickly closed the door and locked it. I was thinking to hide under my bed but it didn't have ample space underneath it. I decided to just wait inside my bedroom until the following day around noon (I thought it was an evil spirit and I wished the full sunlight would make it disappear). The next day it was gone and I never seen such a thing again.

The recent movie titled 'The Invisible Man (2020)' reminded me of my encounter with that thing. I've done some research about it online and found out that it lives in the forest or sparsely human-populated places? Some say it's a cloaking Bigfoot, but I think it's something different. A Bigfoot would have a thick tall physique, wouldn't it? This thing was 5 feet tall and slender. And based on what I saw from its outline I think it maybe had a short hair? Like shoulder length maybe?

The house I used to live in Arcadia is also very close to the Angeles National Forest. So maybe it came down from the forest area. I don't know." S