Appalling Alien Abduction (I just know that they will be back) 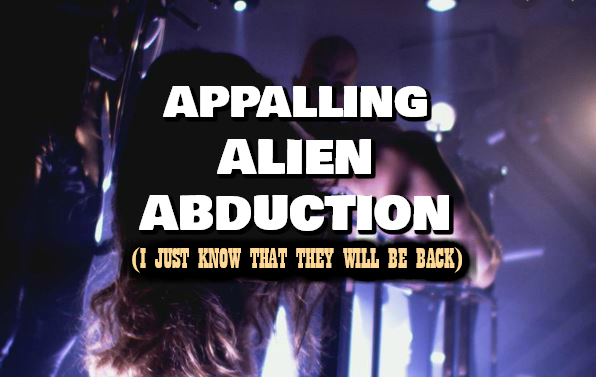 Imagine experiencing an alien abduction after which you discover that this wasn't the 1st time. The next morning you awake in your bed and discover blood. What other horrors await you?

One early morning in the winter of 1990 I awoke from a very deep sleep, feeling nervous as my heart pounded heavily. It was 3:35am and still dark outside. I sensed that there was someone in my bedroom, but all I could see was a spot of light in the corner by the dresser. Suddenly several hands grabbed me from all around the bed. I attempted to scream but could not move or say anything, nothing came out of my mouth.

Within seconds I found myself lying on a cold hard table completely nude and terribly uncomfortable. I looked around me and there were four small beings in hoods and loose robes standing around me. They were conversing with each other, but I could not understand what they were saying since it sounded like a young child's gibberish. I felt something touching me all over my body but could see nothing. The beings' faces had a weird glow with sagging folds of shining skin.

After what seemed like forever these beings slowing moved aside and this human-like man walked up to my side. He was tall, bald and had very pale skin. He also had large round eyes and was very slim. He came over to the table and started to talk to me in English. He calmly said that he was perplexed that I was so scared since he made it clear the last time that they had met he would return to ask a favor. He then turned and raised his hand, gesturing to a woman who walked into the room. She seemed to be a normal human female and quite beautiful. She had a small bundle in her arms and walked over to me. It was an infant, but it had pale skin and didn't look quite human.

The tall man instructed me that he wanted me to take the infant and care for it. It needed the love of a human mother since their race did not understand the emotion of love. I told him that I couldn't because I already had a child and it was hard enough raising my son alone since times were difficult for me currently. He raised his head up and down as if agreeing with what I said and passed his hands across my eyes. I must have passed out because I awoke and found myself in my bed.

It was daylight and I figured that I had been 'gone' for about 5 hours. When I tried to get out of bed, my legs and hips were very stiff and sore. I carefully stood up and noticed 2 large spots of wet blood on the bed sheets. The experience with the beings was still fresh on my mind but I had no idea that I had endured any probing or surgery.

A few days later, I decided to schedule a doctor's appointment just to make sure I was OK. The doctor recommended a full physical since my blood pressure was higher than usual and my ankles were swollen. An appointment was made at my local hospital for x-rays and blood work.

To make a long story short, I returned to my doctor's office a few days after the tests were performed. When I walked into her office, she asked me to sit down and explained that my right kidney was missing. She said that it was probably missing since birth and was just never noticed. I found this hard to believe since I had given birth to my child and have had other x-rays in the past. I just agreed with her assessment and was instructed that I would need to start taking hypertension medication and would need to be regularly monitored.

I am positive that the beings removed my kidney and performed other experiments on my body. Though it has been almost 20 years since that encounter, I just know that they will be back.

Have you ever heard of organs and/or body parts being harvested from abducted humans?

I sincerely hope I can eventually get some answers. RO

Children Of The Greys

Appalling Alien Abduction (I just know that they will be back)