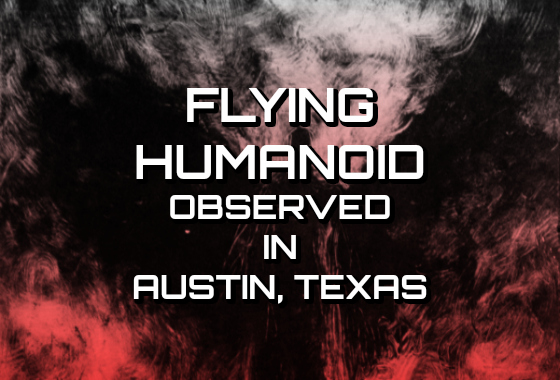 A couple of months back me and one of my older cousins were standing outside of my house. He was having a cigarette, I'm not a smoker but was always reluctantly called outside every smoke break. It was about 9 pm and being 4 cigarette breaks in we'd pretty much ran out of things to talk about. I opted for just looking into the night sky and gazing for the big dipper it being the only star I could typically spot right away. As I'm looking up I notice a dark silhouette literally about 10 ft. from the top of my house. I live in a two story home so 10 ft from my roof is pretty high up but yet still close enough for me to still see. I could vividly see that it was the shape of a person flying from above my home and over across the street and out of sight. It moved smoothly across the sky not to fast, just at a glide. I stared in disbelief unable to speak. Long after it vanished behind my neighbors home I still looked in its direction trying to understand what just happened. When I finally was able to gather my thoughts enough to talk I turned to my cousin who was also looking into the sky and said "Lets go inside".

He put out his cigarette and we both walked into the house and sat in silence for about 5 minutes. The silence was broken by the sound of my cousin taking in a deep breath before asking me "Did you see something flying outside". Before he could finish I burst out into rapid sentences about what I saw. Before I knew it we were both going back and forward barely letting either get a word out. We decided that what we saw was real and it really did happen. That's not the most terrifying part though. A few weeks later after my mind had finally calmed down a little I stumbled across TV show on Destination America entitled "Monsters and Mysteries", I believe. The second episode I watched turned out to be based on sightings in Austin, TX. I couldn't believe it, the episode was about flying humanoids being spotted in here in the city. It confirmed for me that what I saw was actually real and I hadn't been one of the only ones who's spotted it. Rather you believe me or not do some research or laugh it up and accuse me of being on drugs or watching to much 'Jeepers Creepers.' I honestly don't care if you believe me or not. I still look to the sky on most nights. I know their still out there. ZL

NOTE: I have received a lot of winged humanoid sightingS from many parts of Texas, including the Austin area. Lon

Have you had a sighting of a flying humanoid or huge bat-like creature? Please feel free to contact me at [email protected] - your anonymity is guaranteed. Our investigative group is conducting a serious examination of his phenomenon. We are merely seeking the truth and wish to determine what eyewitnesses have been encountering. Your cooperation is truly appreciated. You can call me directly at 410-241-5974 as well. Thanks...Lon Strickler
Mothman Dynasty: Chicago's Winged Humanoids