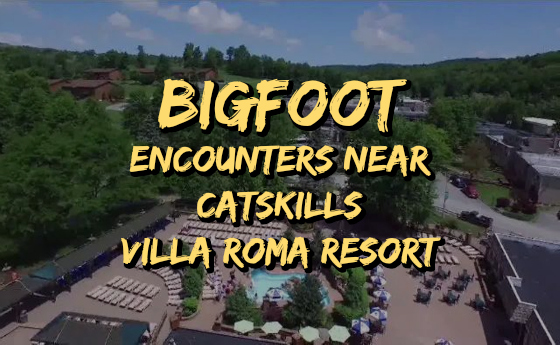 I recently received the following information in reference to Huge Bigfoot Observed by Catskills Hikers:

Hi Lon, here is my sighting. I live in Monticello, NY which is maybe a 15-minute drive where the recent sighting at the Villa Roma took place.

I am a supervisor at UPS and this sighting took place back in 2015 on my way to work. I have to be at the building by 4:15 am to get things set up for the sort. I was traveling west on old Rt.17 in Harris, NY. The road at the spot of the sighting kind of goes downhill for about a 1/4 mile then starts to come back up. I was at the point where it starts to go uphill and my brights caught a huge black figure stepping from the middle of the road towards the right side embankment. It stopped just at the edge of the grass and it looked at my car coming up the road towards it. When I say it looked, it didn't turn its head, it kind of turned its whole upper body to look. The thing that made me hit the gas to get away from it was that its eyes were a bright green. If you've ever seen those green safety vests you know the color. It looked at my car, turned back the way it was facing and walked down the embankment. It was at least 7 1/2 to 8 feet tall and the broadest thing I've ever seen.

I got to work and called my brother. I also refused to do anything outside of the building due to it being dark and seeing this thing like 2 miles down the road.

Later in the evening my brother convinced me to go back and show him the spot. I took him and refused to get out of the car. After about a minute with a flashlight on the side of the road he asked me to come over. I did reluctantly, and he pointed and said "what do you see in the grass?" I looked down and it was a print about 15 inches long and about 6 inches wide. I told him to get in and we left.

I drive that road everyday and haven't seen anything else, but the side of the road that it walked down there are a couple of run down bungalows. Maybe it was heading to those. It scared the hell out of me at 4 in the morning. Thanks for your time. JW

I also received the following statement:

Hello - My nephew mentioned the "Bigfoot" sighting by the Villa Roma. In reference to this I would like to add a similar occurrence.

About 5 years ago my family rented a farm down the road from the Villa Roma. On a spring evening about 8:30 -9 pm, my son and I were rounding the curve of the long driveway when the headlights caught a large upright figure striding parallel to the driveway toward the woods. It was approximately 8 to 9 feet tall, shaggy reddish hair and piercing blue eyes. We both said, "did you see that?" in unison and I stopped suddenly and backed up. It was gone. Emblazoned in my mind was its face which lacked hair and its blue eyes which lacked fear or surprise. It merely strode away. That is the only time we were able to witness the creature. CK

Sasquatch: The Apes Among Us

Squatching: A Guide for the Novice: A Beginner's Guide to Becoming a Bigfoot/Sasquatch Investigator