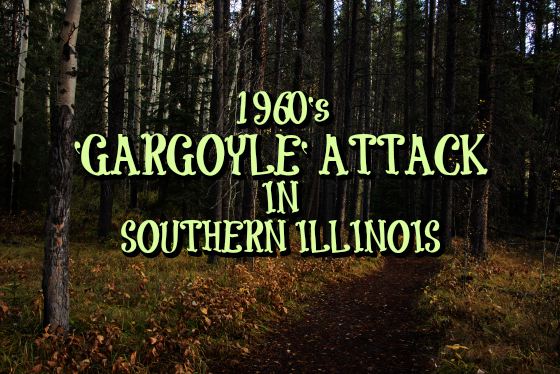 The following comment was found on the Beyond Creepy YouTube page. It was made in reference to a discussion about Gargoyles:

“This guy (Nick Redfern), is telling the truth about this Gargoyle-looking thing back in the 60's because this thing paralyzed me one day when I was six, on a trail in the woods. After it was done with reading my brain for technology it let me go. It looked like a Gargoyle with huge bat wings. I lived in Alton, Illinois at the time, back in the sixties. This is true. This Gargoyle-bat looking thing erased my memory for over 40 years, then one day, I just started to remember to my horror. Because growing up on a farm in southern Illinois after moving from Alton, Illinois I never saw anything that would trigger my memory of that day when I was six years old.

Now, back to what triggered my memory of that day in Alton on the trail. I was in my late 40's when my friends were camping out on a dark cloudless night when, all of a sudden, I saw my first flying saucer. So I hollered to my three friends to quickly come here and look up where that I was pointing and they saw it too. It was very clear to see what it looked like. Saying the least, we were all amazed because none of us had ever seen a real flying saucer before. After the camping trip, I started to think about what my friends and what I had just seen. That's when it hit me like a ton of bricks of what happened to me back in the sixties when that bat-looking thing grabbed me by the back of my head and stopped me where I was just standing in the middle of the trail watching the older kids in front of me racing to the club house. They just kept on running and never looked back at me when I was stopped by this Gargoyle-bat-devil looking thing that had me paralyzed. Someone had the idea of racing to the club house that we all built one day but, no, I've never remembered anything about that day until I was well into my 40's. After that night my friends and I went camping when we all saw that flying saucer.

Things in this world are not like we think that they are or like we had hoped that they should be. My hopes are one day to be hypnotized to see if I have any memories of this Gargoyle thing's technology, because as he was reading my brain, I could see his too. So that being said, there's no telling what memory of its technology I have. Just remember this, never never go into the woods without a gun or a very long knife, or something for protection.” - Mary Ledbetter

NOTE: Not sure what to make of this account, but it is interesting because of the sighting I posted last week - Missouri Duck Hunters Observe Huge Bat-Winged Humanoid which occurred directly across the Mississippi River from Alton, Illinois. Lon

Have you had a sighting of a flying humanoid or huge bat-like creature in the Chicago, Illinois metro area or nearby? The entity has also been referred to as the 'Chicago Phantom', 'Chicago Mothman', 'Chicago Owlman' & 'Chicago Man-Bat.' Please feel free to contact me at [email protected] - your anonymity is guaranteed. Our investigative group is conducting a serious examination of his phenomenon. We are merely seeking the truth and wish to determine what eyewitnesses have been encountering. Your cooperation is truly appreciated. You can call me directly at 410-241-5974 as well. Thanks...Lon Strickler #ChicagoMothman #ChicagoPhantom
Mothman Dynasty: Chicago's Winged Humanoids

THE OWLMAN AND OTHERS