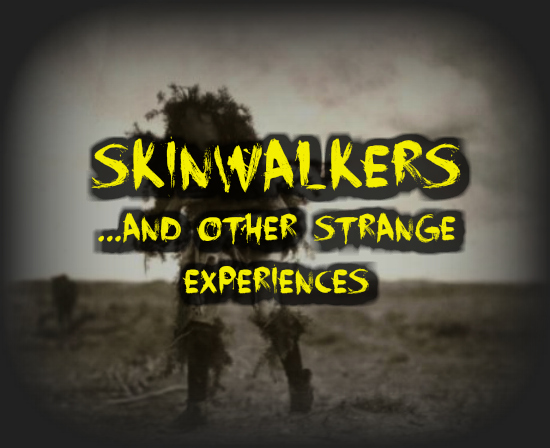 The following are a few more stories from native people in New Mexico and Arizona:

I was about ten or eleven years when I encountered a skinwalker. My family always has a peyote meeting on Xmas and on New Year eve. All my cousins and I were sleeping in my mom's hogan while most of our parents and guests were in the tepee praying. They said that a man saw something outside the tepee and he told the Fire Chief, and he told my uncle. My uncle woke up my older brothers and they got out the guns and our spotlight to look for whatever was creeping around our houses. We live in a small valley in the highest part of our part of the rez, near Pinon.

All of a sudden I heard a loud gun shot, my brother's 30.30. It scared the Hell out of me since I was fast asleep, but my sister was the only one in the house with us and she already had burned some cedar and had said a protection prayer for us. My brothers and one of my cousins were outside shooting at some sort of creature that was running around in an arroyo about half a mile from our house. My niece and I had gotten out of our beds and were watching from the window. They were sure that they had shot it a few times but it would just get up and run off again. But when my mother and father smeared white ash on the bullets they started shooting again the creature left our valley.

It is a very taboo to do any sort of hunting or shooting during blessing ceremonies, but something had to done that time. That is as close as I have ever come to a skinwalker, as far as I know? Anonymous

I started dating a beautiful native girl. But there has been some trouble with an ex-boyfriend of hers. And recently strange things have started to happen around my property. I live on a ranch in southern NM, it's pretty isolated. But lately I've started seeing shadows and shapes moving around outside at night. And coyotes, which have never been to much of a problem; have started coming into the yard. I even think I saw one in the house one night, but I can't be too sure. One morning I found a feather laying in front of my door. I quickly called my girlfriend, she told me not to touch it, but wouldn't say why. Can anyone give me any information as to what is going on here exactly. I can't explain it but this is starting to seem like something...out of the ordinary. TT

This happened in Vanderwagon, NM. My uncle and I were sleeping when all of a sudden we heard all the dogs bark and we all went outside to see what they were barking at. They were barking at something in the trees since there's a lot trees up there. My uncle was throwing rocks in the trees. After a while the dogs stopped barking and it started to get quiet. When we were about to go back inside we heard the trees rustle and there was no wind. Then we heard this weird sound and it got quiet again. We stayed outside for at least another 30 min and we went back inside and went back to sleep.

In the morning we went back outside and saw our chicken pens gates were open and all our chickens and hens were out. We all walked around looking for them and couldn't find any. We went to the where we heard the noise that night and found these weird unexplained footprints. We followed it and it led us to the outhouse (since there is no running water or electricity) and it looked like it had been walking back and forth. Then we went to our chicken pens to see if there were any foot tracks. All we saw was the hens and chickens prints and nothing else. We freaked out. Only a human could open the gate. We told my uncle's mom (my grandma on my moms side) and she blessed us and told us that, that it was a skinwalker. From then on, any noises outside and at night, we yell in Navajo "Go away. Bother someone else". PL

The year my husband and I started dating, 'someone or something' did everything they could to keep us apart. It was a summer evening and the sun had started to go down and we took a short stroll just outside my house. As soon as we started walking, I saw a shadow quickly stop and walk behind a huge cedar tree. Once I noticed this I told my boyfriend and he threw a big rock at it. As soon the rock hit the tree, a huge bird or owl flew out of the cedar tree. I have never in my life seen anything this big! The wings on this thing had to have stretched out at least 7-8 feet across. It was dusk, but still enough sun out to see in front of me and I know for a fact I saw something. I believe whatever hid behind that tree turned into a bird and flew off. It was so weird. After that, we had a very unsettling summer of this strange "shadow visitor" making it's appearance every now and then. RR

I was visiting my parents in NM one summer. My mom, brother, and I decided to go to my grandma's sheep corral to close the gate. This was at night and near a canyon many people believe was haunted. We traveled to the remote area in the darkness. I was sitting in the middle and really tired when we got there. My brother left the door open and said he was going to be right back as the corral was about 50 feet in front of us. I was dozing when I heard a whistle. I wasn't like a person whistling, it was like a flute. My mom yelled for my brother to get in the small truck we had. I was so scared I couldn't move. My mom said, "Did you hear that?" I said, "Yes, a flute?" We heard it again on the left side of the truck very close. My brother jumped in and we drove off quickly. When we got home my mom told my dad what happened and they had a medicine man bless the area. I still see and hear things at night, but not in the immediate area, just farther away. MM

I wonder of this was a dream or if it really happened. It was just me, my little sister, and my cousin. We were watching a movie and I went into the kitchen to get something. And this is at my house. We have a big window in the kitchen that looks out to the backyard. I looked out that window and I saw something. It was on the other house, the roof. I didn't scream, I just watched. It jumped into our backyard. It was creepy because the sun was going down and it was really cloudy. I watched it until my little sister and cousin came in the kitchen. That was when it came closer. I think it saw us because the next thing I knew we were huddled together on the floor and the thing was hanging onto our roof! I don't remember anything after that.

We were on our way to Phoenix to pickup my brother. I had a nightmare in the car. I told my mom. She got freaked out but didn't tell me what it meant. We are Zuni, and are really superstitious and everything that we dream of is a sign. I don't know why I was scared. I'm not scared of anything, well except the thought of never getting married and having children. I don't have that immune feeling of fear. Well I just wanted to tell you about my experience. JN

Hunt for the Skinwalker: Science Confronts the Unexplained at a Remote Ranch in Utah

Diné: A History of the Navajos

Native American Tribes: The History and Culture of the Navajo
PLEASE HELP SUPPORT THIS FREE NEWSLETTER