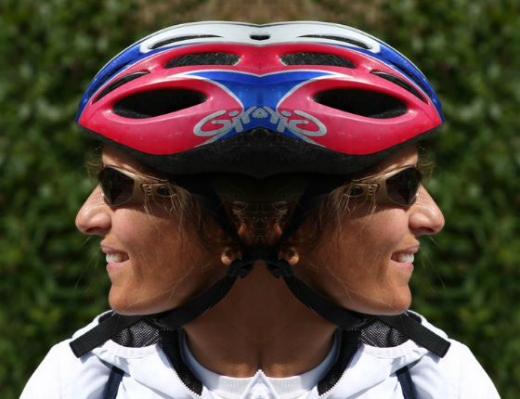 “In the early nineties my girlfriend, now wife and I did a week long cycle tour with a group. As the group had different abilities we had a series of refreshment stops arranged, and people came and went as they pleased. Sometimes a bunch arrived at a café, other times there were just one or two when we arrived. A lady serving at one place warmly greeted my girlfriend and said "oh you're back," but we didn't give it much thought and continued the ride. At the next stop a guy said "good to see you again" although both of us were sure we'd never met. When this happened a third time my GF insisted to the woman that she had never been there before and it was many miles from where we lived.

As a young woman my wife was particularly striking (still is but we got older!) and there was no one in the group who resembled her or had the same cycling outfit. The woman insisted she'd served her tea and cake only half an hour before, and they'd chatted, and clearly thought she was playing some kind of joke. Interestingly none of the people mentioned her being with me. Who this mystery cyclist with the same appearance and speech, riding to the same rest stops just ahead of us was, we never discovered. We asked around the group at evening social gatherings, but no one had ridden with such a person or seen them at café stops.

Thought to be a legend or a myth at least one local man says Bigfoot has been said to be spotted in the Panhandle. Southport resident, Dustin Teudhope, says he first encountered the creature back in 2009.

One day in 2009 turned a skeptic into a believer. Dustin Teudhope says was forever changed while hunting in the Apalachicola National Forest when he says he encountered a creature like no other.

"It kind of made me a little unnerved and I tried to tell my friends about it and they just thought it was make believe and that I was seeing things. I really know what I saw so I just went on looking more for it and I just kept finding more and more," said Dustin Teudhope, Bigfoot Witness.

Teudhope says the animal looked like a cross between a gorilla and a bear... it was Bigfoot. "They're pretty scary. They've got a muzzle and ears that will stand up or lay down, and on two feet it resembles a werewolf," said Teudhope.

Since that first sighting, he is determined to prove what he saw to be true. He and his friends set up cameras throughout the forest, cameras said to have caught the sights, heaving breathing and growls of the creature. He even says that signs seen here in the panhandle, match the signs of other sightings across the nation.

Along with video footage of what he believes to be Bigfoot, he has also found hand crafted weapons made from sticks and large footprints that they made a cast of for record. Teudhope says Bigfoot is real, and for those going into the woods, be prepared.

"It's serious, it's not a joking matter, it's not something that people are just making up. They're really out there," said Teudhope.

Teudhope has also written a book that captures his first hand encounter and his journey tracking Bigfoot. He says he plans to write another book soon on his most recent findings. 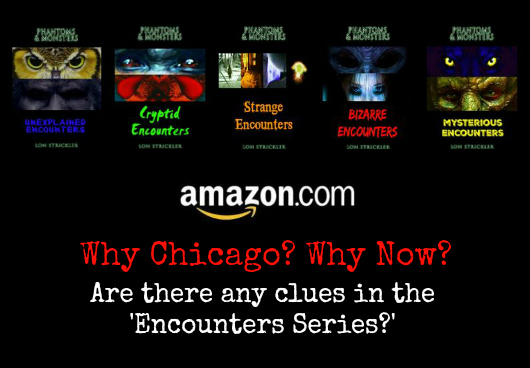 Arlene in Parsons, Kansas called in to tell of a weird experience she had:

“Black-eyed children may be born of normal parents. The father is Mexican. The girl is Caucasian. Your readers maybe know about him. They call him Baby Rey on Facebook. He was born with only two channels in his heart. They told him last December, they sent him home telling her he would not live the week out. He celebrated his first birthday in February. I just got to see him again recently. He only weighs 17 pounds. He's walking. He's talking. He sits up but he is a mean child. He's got a head of hair that is so dark and so much it even, it looks like a woman's head of hair and those eyes will lock into you and they will not leave. You can't get away from his eyes until he moves his head. All around his face is black. (Dave Schrader asks if there is any whites in the eyes at all). No! And that's why I was wondering, because he's not supposed to be alive because he only has two channels when you're supposed to have four in your heart.”

Is the world going to end on September 23? Biblical prophecy of the 'Rapture' predicts the apocalypse will occur on that exact date

The Hollidaysburg Incident - Note: I have no comment or input to this article...Lon

Coulrophobia: The Childhood Fear Of Clowns

The Psychology Behind Why Clowns Creep Us Out

Caverns, Cauldrons, and Concealed Creatures: A Study of Subterranean Mysteries in History, Folklore, and Myth

The Youngest Billionaires of the World

Engagement: How Snapchat for Real Estate Can Boost Your Business