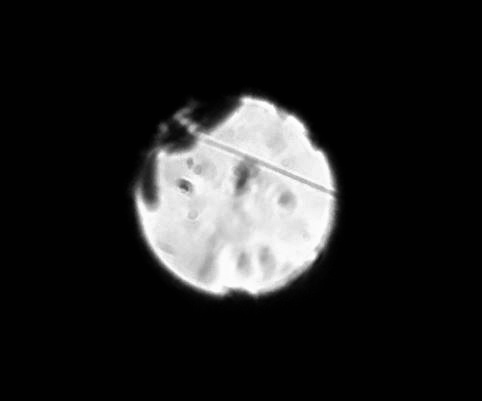 2017-01-23: It was dusk on Jan 23. I was at my house in Playa del Rey, CA. My lights dimmed down to orange accompanied by an odd sound like the powering up of a large transformer the opposite noise I expected to accompany lights dimming. The lights came back up suddenly but then went out altogether just a few seconds later. I went to my outside fuse box to check the breakers but only took two steps outside house to notice large craft directly above me maybe only 100 feet up. It was obviously responsible for power outage as I could see other houses go black underneath it as it proceeded out toward ocean. I was initially freaked out and ran to local restaurant two blocks away. I didn't believe in UFOs until then, so I wanted a witness and I grabbed the manager I know Mario, who while bitching about his customers with no power was also being physically dragged outside by me. I pointed at large UFO and said what the @#$% is that? He looked very alarmed and just stared. His hostess came out and she was looking like someone about to scream, which she then did, but pointed opposite the large craft.

The hillside opposite the ocean had at least seven small lights blinking in and out hovering over and under the power lines and transformers that go up that hill. They were moving quickly, I saw that there were entities emerging partially from lights. I was the only one who ran closer. I ran up to foot of hill and began filming until I could tell one saw me and it landed behind me in my alley in an aggressive manner I took off back to restaurant and a hub of humanity. That one took off back to large ship.

I went to my neighbors took a telescope and shot photos using my iPhone.

I have a view of large craft without light obstruction as it was blinking I caught one moment with no light emitting.

I will attach a couple photos, look in the bright flash on the one and you will see an entity shadow, also the shot of the large craft thru a telescope but I cannot attach the best as I do not agree with your policy re evidence turned over. I will also attach one video from the furthest away so you can see its real...then if you want send an investigator to see the real footage.

Unrelated? Next few days were odd as I felt very much like someone was watching me and following me. A full week later I fell asleep at 2pm, did not wake until 8 am, I had 4 bruises on each bicep in the same pattern. Very odd. Nothing since and have not had the someone is following out of the corner of my eye feeling since. - MUFON

And while the creature itself has been elusive, the crew from Animal Planet's "Finding Bigfoot" was spotted in Oconto County last summer.

One area business is hoping to cash in on the curiosity.

In the community of Mountain, Karen's Unique Gifts offers customers a little bit of everything, including all things Bigfoot.

"I have some magnets here. I have coasters. I can take your picture and put it on a T-shirt for you with Sasquatch. I guess he was on television. They were looking for him anyway" Wirth is referring to "Finding Bigfoot." Its television crew spent a couple days in the Mountain area. Much of the investigation centered around the Mountain Fire Lookout Tower.

Wirth says since the show aired last month, Bigfoot, or Sasquatch, is the talk of the town.

"We've had a few people coming in, saying that they saw Sasquatch, the show 'Finding Bigfoot,' and they wanted to come and get their picture taken here and take a memento. One guy was going to put it on his desk in his office. He bought a statue"

And tourism leaders say anytime a small town gets national attention is good for business.

"It brings different variety of people that never been here before. They come up and take a look at what we have to offer them," said Wade Lewandowski, president of the Mountain Area Business Association.

So, will Mountain be the next Bigfoot capital?

"That would put a name for Mountain. Mountain could use some help in advertising" - Is Bigfoot in NE Wisconsin?

You may be the leader of a country and have the best possible security, but that might not guarantee your safety from paranormal apparitions.

Or so it seems to be the case for Brazillian president Michel Temer, who decamped from his official residence at the Alvorada Palace in Brasilia after he and his family felt "bad vibes" emanating from the luxurious building.

"I felt something strange there. I wasn't able to sleep right from the first night. The energy wasn't good... We even started to wonder: could there be ghosts?" Temer was quoted as saying by Veja News.

The modernist Alvorada Palace is a sumptuous residence at the heart of Brazil's capital city, and is equipped with a huge pool, football field, chapel, medical center and vast lawn.

According to a report in Globo newspaper, Temer's wife Marcela brought in a priest to attempt to drive out any evil spirits, but to no avail.

In the end, Temer and his family moved to the smaller, but still luxurious, vice presidential residence of Jaburu Palace.

Temer knows it well. This was his residence when he served as vice president until last year when then president Dilma Rousseff was impeached for breaking budget accounting laws.

That automatically put Temer in the top job and in the Alvorada. However, since no one filled his vacant vice presidential post, he can now take his pick of palaces.

The house moving comes in the middle of a severe political crisis for Brazil, with many of Temer's allies facing potential corruption probes. - Spooked Brazillian president moves out of official residence because of 'ghosts'

Black-Eyed Children – And An Adult Too

Bad Idea: Elementary School Teacher Uses Ouija Board as a “Prop” During Class

Men in Black – A Worldwide Phenomenon

The Alien Abduction Files: The Most Startling Cases of Human Alien Contact Ever Reported

Mojave Incident: Inspired by a Chilling Story of Alien Abduction


This post first appeared on Phantoms And Monsters: Pulse Of The P, please read the originial post: here
People also like
Most Beautiful Mountain Lakes in Switzerland You Can Easily Reach
Cabin Crashers Slot Review (Quickspin)
10 British forests getaways – with great places to stay
Top 10 Biggest Blackjack Jackpots
How to Handle a Poor Performance Review
Qualcomm Unveils Snapdragon 778G- Features Kryo 670 CPU, Adreno 642 GPU, and X53 5G Modem
How To Get Rid of Ticks in the Yard – 8 Steps
5 Unique C-Suite Titles For 2021
“The Friend Who May Not Seem a Friend” – The Cat and the Fire, Post 2 of 3
Hotel Gfell, South Tyrol
Self Motivation: How to Keep Moving Forward In Your Career or Business