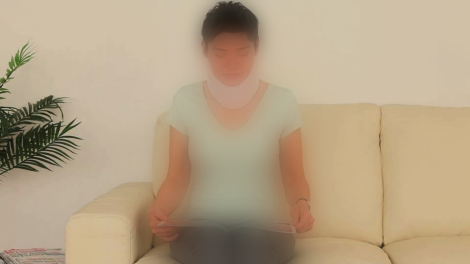 The Young Woman in the Waiting Room

Several weeks ago, I took my husband to the local emergency room after he complained of severe groin pain. It is a small community hospital here in south Texas. I was directed to the waiting room while the doctor took look at him. It was around 1AM in the morning and no one else was in the waiting room. So I took a seat to wait until I could go back in and see him.

I had been sitting for a while watching the waiting room television when a young woman, wearing a cervical collar, walked in and sat down near me. We smiled at each other. She was telling me that she hoped that she could be seen soon, because her neck was bothering her. She picked up a magazine and opened it, but we continued to talk.

After a while, a nurse came by, looked over at us, and stopped. Looking at me the nurse asked if there was something wrong. I answered, "No, we are just talking."

The nurse looked at me as if I was nuts. Then she said, "There is no one in here but you and me."

I looked over at the young woman who smiled, and just slowly vanished. DD

Chilling accounts of the UK’s own Bigfoot are fairly common, and many claim to have spotted a glimpse of an ape-like creature roaming the countryside.

It comes just months after a photographer told Daily Star Online that he may have captured the first ever footage of a Bigfoot roaming the British countryside.

One such bizarre sighting has been reported by monster hunter Jonathan Downes, who says he had a very “peculiar” encounter which he “still can’t explain” today.

While investigating a string of sightings at Bolam lake near Newcastle in Northumberland he claims to have seen an man-like person leaping through a bog. Read more at Monster hunter reveals terrifying British ‘Bigfoot’ encounter

Spirit Communication...Walking in the Cemetery

The sun was just beginning to set as I pulled up to Hillside Cemetery. For a moment, I felt the slight breeze and fooled myself into thinking I was about to have a relaxing Tuesday evening.

Then Michelle Davidson got out of her car with a cigar box full of tools to communicate with the dead, and I remembered exactly what I had gotten myself into.

She fixed her pink-streaked hair that was pinned away from her face, smiled and said, "You ready?"

Davidson had always been interested in the paranormal, but it wasn't until she stayed at a well-known haunted hotel in St. Augustine where she finally experienced it for herself. Thankfully, her first encounter at St. Francis Inn was more "Casper the Friendly Ghost" than "Paranormal Activity 3."

"That night I was having dreams that a spirit was talking to me," she said. "He was telling me all the pranks he was pulling on people. He would set the alarm clock off on people in the middle of the night, and he thought it was really funny."

She said she woke up that morning "with a heaviness" and saw an apparition of a Confederate soldier. After that, she had encounters at nearly every historic place she stayed. Davidson soon became inspired to write the book, "Florida's Haunted Hospitality," where she had sleepovers with spirits in over 15 different haunted hotels and inns.

Because you know, that's what everyone likes to do with their Friday nights.

Since her book, Davidson has only upped her ghost-hunting game. Her toolkit holds an electromagnetic field (or EMF) meter, a pendulum and a set of dowsing rods. There was not, as I expected a "Ghostbusters" proton pack.

We walked among the hundreds of graves, looking for some sort of signal from the EMF. The light stayed green (meaning there were no electrical charges around us), but Davidson said she "felt a pull" to the grave of Vincent Shofner. She got unusually quiet walking towards the man's tomb and apologized for getting emotional. I think it goes without saying that taken on the feelings surrounding other people's deaths is bound to get a little depressing.

According to Davidson, she said people stop from crossing over usually because they're attached to someone, something, or they feel like there's something left they still have to accomplish. She did an investigation at the Live Oak Inn where the staff said they were having a hard time remodeling. After speaking with the spirit who was still living in the inn, she uncovered the easily fixable problem.

"It was his old parlor where he had played card games," she said. "It was stacked to the ceiling with chairs, and he was feeling claustrophobic. After I did a cleansing and talked to him, things got rolling, and they got the inn opened."

After meandering around the cemetery for a bit — something I don't recommend doing after the sun goes down — Davidson said it was my turn to try out a tool. She gave me the dowsing rods, L-shaped metal rods that started as a practice in the 15th century to find ground water, buried metals and other objects without the use of scientific equipment.

Basically, you just hold the rods out with straight arms and hope for the best. When Davidson did it, she asked the spirits to show us where we parked our car. Spookily enough, the rods rotated to the direction of my Corolla. When I did it, the rods just rotated in towards each other, most likely because I don't have enough upper body strength the keep a steady hand for more than 10 seconds.

Walking back, Davidson explained that while there are scary spirits, most are just regular people who aren't ready to say goodbye yet. She hopes by being able to communicate with them she can help find closure for both those who are alive and dead.

"I want people to be aware that there is life after death, and there are stories to be told," she said. "Preserving history and people's memories is really, really important. And that's what I'm trying to do." - I walked a cemetery with a paranormal investigator and a ghost told me where I parked my car

We've all heard the crazy stories about radioactive boar roaming the nuclear wastelands of Fukushima.

But such an outlandish tale can't possibly be true, can it?

No-one has ever seen pictures of these creatures

These incredibly unusual photographs of the terrifying mammals were taken in the exclusion zone around the crippled Fukushima Daiichi power plant, whose reactors went into meltdown after it was struck by an earthquake and tsunami on March 11, 2011.

There have been many obvious dangers faced by Japan in the wake of the disaster, but one of the most unexpected has also proved to be one of the most fascinating. Find photos at First photos of radioactive wild boar roaming Fukushima's nuclear wastelands as they're culled for attacking people

The Mysterious Giant Snakes of Japan

Scientist Shows What Space Aliens Will Really Look Like

Does the Tasmanian tiger still exist? Rex Gilroy believes so

The Evil Mermaids of Africa

The Mythical Creatures Bible: The Definitive Guide to Legendary Beings