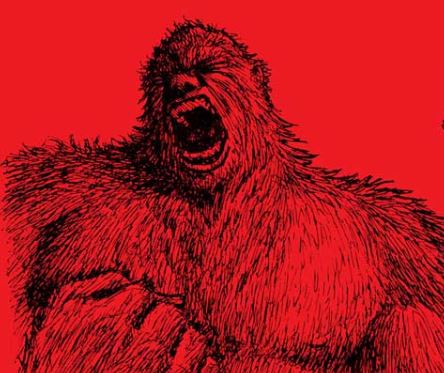 Two young Marine reservists on an overnight camping and hunting trip last month claim they got the scare of a lifetime: a possible Bigfoot sighting.

Tyler Kroetsch, 20, and Wil Neill, 23, were in the southwest corner of the Waterloo State Recreation Area in Michigan in the early morning hours of Sept. 16 when they heard footsteps about 20 feet away from them. The seasoned outdoorsmen then froze to listen to what came next: two distinct, four-second-long screams that didn’t sound like anything they’ve previously heard in the woods.

“You could hear each step,” Neill told The Post on Wednesday. “It stopped almost directly in front of me, about 20 feet away, off to my right, and then it screamed two times. After that, we freaked out.”

Neill, of Livonia, Mich., said he was so spooked by the sighting that he and Kroetsch ended up sleeping in their car. They never reported the incident to officials at the state’s Department of Natural Resources, but Neill insists he’s a believer.

“I went from zero belief that night to 100 percent believing in Bigfoot,” Neill said. “It’s ridiculous to say, but, after that night, we don’t know how else to explain it or what to say.” Read more at Bigfoot wouldn’t shut up during our camping trip

Americans say they're more afraid of clowns than climate change

The US is in the middle of a so-called 'clown attack' epidemic right now, and a new survey by the good folks at Vox has just revealed that it's not just media hype - people are actually really, really freaked out about it.

In fact, the poll showed that Americans admit to being more scared of clowns than they are of climate change, terrorism, and even death.

That's despite the fact that we currently just lived through the 12th hottest month on record in a row - an entire year of record-breaking temperatures - and our melting glaciers are now ticking time bombs threatening to wash entire villages away.

But, we get it, clowns are creepy. Since August, there have been more than 100 'suspicious' clown sightings reported across the US, with many of those not leading to arrests. But apparently just the sight of these clowns is enough to terrify people. Read more at Americans say they're more afraid of clowns than climate change

NYC woman may have been eaten by dogs

NEW YORK (INSIDE EDITION) - A 68-year-old woman was found dead in the basement of her New York home by her devastated daughter, who told authorities her dogs may have eaten her mother, a police source told Inside Edition.

Officers responding to a 911 call for an unconscious and unresponsive woman found the body of Daisie Bradshaw in her Staten Island home at about 9:40 a.m. Tuesday, the NYPD said.

The victim, who was found beaten and bruised, was pronounced dead at the scene, officials said.

Two dogs were in the basement with Bradshaw when she was found, a law enforcement source said, noting they may have attacked the woman, who was found with defensive wounds.

Bradshaw’s daughter told a 911 operator that mother had been eaten by her two German shepherds, which she needed to have removed from the home, a police source said.

The NYPD’s Emergency Service Unit removed the dogs after sedating them, the source said.

The city medical examiner will determine the official cause of death and the investigation into the woman's death is ongoing, authorities said.

The youngster has claimed the vampire-like beast launched itself at him on Sunday (October 25) evening, at a cemetery in Westbury, Tasmania.

One teen says: “We’ve just got back from the graveyard and Tim’s been bitten by some weird bug, or something.”

Tim looks dazed as the camera zooms in on a deep-looking red gash on the side of his neck.

The cameraman then moves to a laptop screen, where a video has been loaded appearing to show the attack.

In the footage, Tim can be seen waving his hands around his head – clearly attempting to bat away whatever has bit him.

The woman operating the laptop then pauses the clip with a strange white figure in the centre of the screen.

“What kind of bug is that,” she says as the creature appears.

It is impossible to accurately make out what the creature is but some viewers speculated it could have been an evil spirit. Photos / video can be found at Proof VAMPIRES exist? ‘Blood-sucking beast’ leaves huge bite on teen’s neck in graveyard

The Dark Side of Vintage Carnival Sideshows

Caverns, Cauldrons, and Concealed Creatures: A Study of Subterranean Mysteries in History, Folklore, and Myth

The Occult: The Ultimate Guide for Those Who Would Walk with the Gods

Everything Is Under Control: Conspiracies, Cults, and Cover-ups