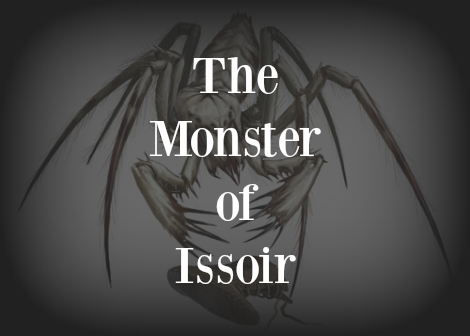 I recently noticed this old account...and wondered why I never heard of it previously. It's a monster / cryptid tale that was reprinted in the 'The Piqua Daily Call' on August 18, 1894:

For many years it is undeniably stated that in the fourteenth arrondissement of Paris--called the tomb of Issoir--a number of persons living in that quarter had mysteriously and periodically disappeared. The most careful researches, the most minute inquiries, the most skillful agents of the police had failed to discover the least trace of them. Every year successively some inhabitants of this quarter would suddenly disappear, leaving their friends overwhelmed with grief and anxiety. It is also stated that these strange, inexplicable facts always occurred in the early spring--from the 20th to the last of March--and without regard to age or sex.

First a notary disappeared. It was thought he had used his client's funds and fled to parts unknown. Then an old woman, returning late one night from market, was the next victim, then a laborer going home from work. The last victim had been a young girl--a flower maker out late delivering her goods. From that time she had as completely disappeared as if the earth had opened and swallowed her up. Strange to say, no children had been among the victims. This peculiar fact was accounted for in this way. These mysterious disappearances always occurred late at night, when the children were at home asleep.

As the time was drawing near for one of these periodical mysteries the chief of police became very anxious and instituted a strict surveillance, confiding the matter to a number of the most skillful of his assistants, hoping the combined efforts of so many zealous agents would surely be crowned with success. You will now see the result.

One night--this fact can be verified by applying to the office of the prefecture--a policeman at about 3 o'clock in the morning heard a distant musical song, which seemed to come from the bowels of the earth. He listened and fancied the sounds came from an opening in the center of the street, at the foot of an enormous rock called the tomb of Issoir, or the Giant's cave. It may be interesting to state that this rock derived its name from a legend that a great giant had been buried there many years before the Christian era, and this rock had been placed there to mark the tomb. Surprised at this strange discovery--for the opening had never been noticed before--the policeman waited, listening to this peculiar song, when he suddenly saw a young man approaching. He knew from his costume that he was a countryman lately arrived in the city. This young man also seemed to hear the subterranean sounds, first walking slowly with a peculiar wavering step, as if in cadence with this musical chant, then faster and faster as he drew near the fatal rock, until he ran with such velocity that in spite of the warning cries of the policeman he was swallowed up in this mysterious opening. Without taking a moment to consider the policeman recklessly followed, first firing his revolver and giving one or two vigorous blasts on his whistle. At this signal several of his comrades quickly arrived.

The musical chanting had ceased, but they could hear in the dark, cavernous depths the muffled sounds of a desperate struggle. By the aid of ropes and ladders they succeeded in entering this mysterious chasm. The light of their lamps revealed a sickening sight. The countryman was lying on his back writhing in the grasp of an unknown monster, whose horrible aspect froze the agents of police with terror. It was as large as a full grown terrier, covered with wartlike protuberances and bristling with coarse brownish hair. Eight jointed legs, terminated by formidable claws, were buried in the body of the unfortunate victim. The face had already disappeared. Nothing could be seen but the top of the head, and the monster was now engaged in tearing and sucking the blood from his throat. As soon as they recovered from their horror and surprise a dozen balls struck the body of this sanguinary beast. He raised up on his legs, a greenish, bloody liquid flowing from his wounds, and, with a frightful cry, expired. The first policeman, who had given the alarm, was lying unconscious in one corner of the cavern, where he had fallen, a distance of 30 feet. It was with great difficulty they succeeded in removing the two bodies and the unknown monster from the cavern. The poor countryman was dead, but the policeman was soon restored to life.

The agents immediately sent for the commissioner of police, who summoned a naturalist in great haste. The first established the identity of the victim; the second declared the creature lying before him was a gigantic spider. The species had been considered extinct for centuries--ever since the days before the deluge. It was called "Arachne gigans" and was said to have the power of enticing its victims by a peculiar musical song. None had been seen or heard of for ages, but it is now believed some of these sanguinary beasts still exist in the deepest galleries of the catacombs. The dead body of the spider was conveyed to the Museum of Natural History, where it was carefully prepared and stuffed and is now on exhibition.

This account reads like an Edgar Allan Poe allegory. Is it fact or fiction? The monster was 'carefully prepared and stuffed and is now on exhibition'...well, I'm not sure of that. If so, does anyone have an image of the supposed exhibit? Lon