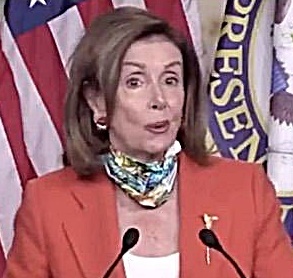 Since May 25, there have been many protests — even rioting and looting — in the name of George Floyd. His has become a household name in the month that has passed, yet Democrat "leaders" Chuck Schumer and Nancy Pelosi can't remember Floyd's name. Schumer is the top Democrat in the Republican-controlled Senate. Pelosi is the Speaker of the House of Representatives and (yikes!!!) third in line of succession to the presidency. God help us.

“I only will do that [name a bill after George Floyd] if this legislation is worthy of George Kirby’s name, and he said it is,” the speaker said today.

Speaker Pelosi says the Democrat-led Police Reform Bill has to be “worthy of George Kirby’s name.”

She did not catch her own mistake. Schumer, at least, did correct himself after botching Floyd's name twice.

Can't make this up. In the middle of his speech to kill the @TimScottSC police reform bill, Chuck Schumer can't even get George Floyd's name right.

This begs the question: After four weeks of heavy news coverage, and of George Floyd's name being on the lips of the average American, how are these top Democrats able to flub his name? Do they even talk about Floyd off-camera? Do they even care enough about George Floyd that his name just automatically flows easily off of their tongues? No and no, apparently. To Pelosi and Schumer, the tragedy of George Floyd's death is just a cheap talking point.
Twitter: @chinewsbench (twitter.com/chinewsbench)