UKRAINE: Russia reacts to landmark NATO Summit - Analysis
By Iain Fraser - GEO´ Consultant Geopolitical Editor
GEOPoliticalMatters.com
Meanwhile Ukrainian sources have said that they are trying to evacuate its citizens from the frontline eastern city of Lysychansk, the current focus of Russian forces where it is estimated about 15,000 people remain under relentless shelling from the Russian military machine.

Landmark Summit
Meanwhile the NATO Summit in Madrid finally managed to overcome objections by Turkey to enable both Finland and Sweden to join the Defence Alliance a complete turnaround from their long-term neutral stance but since the illegal invasion of Ukraine has seen support to join the alliance rise dramatically.
Of course, Russia strongly opposes the two states joining and has used the expansion of the West's defensive military alliance as a pretext for its war in Ukraine. Predictably, Putin has vowed retaliation for the joint Scandinavian announcements. He has already said it would deploy nuclear weapons in the Baltic, though the real threat is more likely to come in the form of disinformation, cyber-attacks, and other provocations.

Mr Putin is getting “more NATO”, not less, as a result of his actions in Ukraine - Boris Johnson

UK further supports Ukraine with a further £1bn in military aid
The UK has further support for Ukraine with a further £1bn in defence systems and technology taking its financial commitment to Kiev to £2.3bn - as well as a further £1.5bn in humanitarian and economic support for Ukraine. UK Prime Minister who attended the Madrid Summit said that British spending was "transforming Ukraine's defences". The pledge came after President Zelensky urged NATO leaders to do more to help Ukraine's war effort.

Mr Zelensky told NATO leaders the monthly cost of defence for Ukraine was around $5bn (£4.12bn)

The new British aid will go towards paying for "sophisticated air defence systems", drones, electronic warfare equipment, and "thousands of pieces of vital kit", the UK government said taking the UK second only to the US in terms of military aid for Ukraine with the US recently approved a $40bn (£33bn) package of support. Learn More - Register Free to receive our full analysis direct to your inbox or smart device. 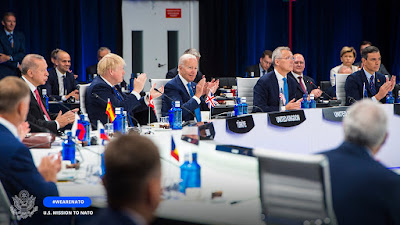