One year after the agitation, thousands of farmers gathered at the Delhi border 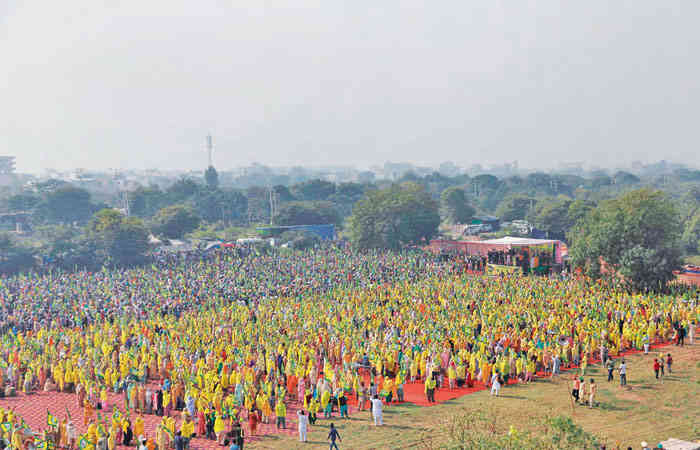 New Delhi: November 26 marks one year since the farmers' Agitation against the three agricultural laws of the central government and the demand for legislation for support prices.

To this end, the central government has started preparations to repeal the agricultural laws but the demand of the farmers is now to give legal recognition to the support price. Following which, the farmers have announced on the completion of one year of the agitation that they will not take back the agitation till the demand for support price is met. On the other hand, there are reports of more than 4,000 farmers gathering at the Delhi border.

The agitation is going on here with the demand of support price by the farmers while the farmers are also agitating at other borders of Delhi. Currently, the number of agitating farmers on the Delhi-Haryana Singhu and Tikri border has crossed 4,000. So farmers are now likely to be preparing for the next movement in which their main demand will now be the legal recognition of support prices.

On the other hand, a large number of farmers had gathered on the borders of Delhi. Many farmers rallied with the flag of their organization in their hands. The farmers started agitation against the government on 26th November 2020 with their various demands which is one year old. Not only Delhi Border but also Haryana, Punjab, Uttar Pradesh and other states celebrated one year of agitation by calling Mahapanchayats.

He also announced that the movement would now intensify with other demands, including support prices. A large number of women also came to Tikri and Singhu border. Congress leader Priyanka Gandhi said the farmers' movement would be remembered as the pride of the BJP. 700 farmers have been martyred in this farmers' satyagraha.

In the midst of this farmers' agitation, now Union Minister Ramdas Athavale has demanded that action be taken against the farmers as the farmers and their leaders have returned. He said that the farmers' leaders were saying that they would not return home till the agricultural laws were repealed, now that the government has taken back the laws, the farmers are still agitating. To be prosecuted.

One year after the agitation, thousands of farmers gathered at the Delhi border