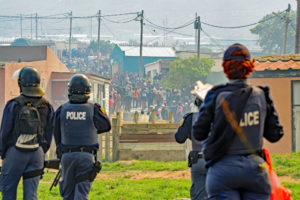 Gang violence has hit the port city of Cape Town, South Africa. South African officials have deployed army in order to deal with the gang violence. Bheki Cele, Police Minister of South Africa, said, “Army will operate along side the police in an operation of recovering illegal arms and drugs”. In the last weekend, 13 people lost their lives in the violence attacks in different parts of the city.

The gang violence is not new in Cape Town as its roots are decade long. The recent rise in the violence is due to the turf war between the gangs, according to the authorities. The local reports said, “The police presence has been increased in Bonteheuwel, Delft, Hanover Park, and Philippi East.

He said to the soldiers, “I defended the deployment of army which would be commanded by the police”. Police will lead the army in this operation in cape Town, according to the Police minister. Cele added, “The current deployment of the army will last for three months and it might be extended if required”. Army was also deployed in Cape Town back in 2017 for dealing with the gang violence.

Mr. Cele is hopeful about bringing peace in the townships of Cape Town. He ensured his soldiers that the army will be commanded by the police. The current deployment of the army is the need of the time due to rise in the violence attacks in the townships of the port city. The operation is for the recovery of illegal arms and drugs.