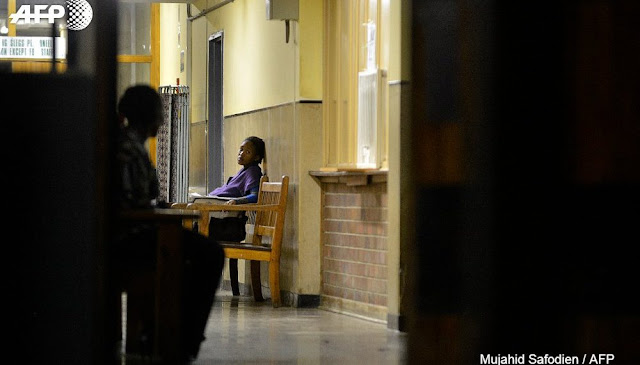 In the next couple of days, South Africa will hold her sixth democratic national general elections since the historic first inclusive elections of 1994, which heralded the official end of apartheid. Accordingly, the elections also mark a quarter of a century since the commencement of democratic rule.

In contrast to the 19 political parties that contested the 1994 elections or the 29 parties that battled for the hearts and minds of the electorate in the 2014 general election, this time, there are 48 contenders on the ballot. Although the number of contestants might hint at the competitiveness of the contest, there are other factors that have significantly raised the stakes in these elections, certainly for the governing African National Congress (ANC). For starters, since the 2009 elections, the fortunes of the ANC have been on the decline. From a 69.7 per cent majority in 2004, the party registered 65.9 per cent in 2009, a 4.2 per cent decline. It dipped by a further three per cent to 62.15 per cent in 2014 elections, slightly lower than the 62.7 per cent result of the first elections in 1994 and certainly a substantial decrease from the 66.4 per cent in 1999.

The most serious haemorrhage of the ANC’s electoral support would, however, come from the 2016 local government elections. (Local elections in South Africa are held every two years after each national election.

The latter is held simultaneously with provincial/state elections). The party declined by eight per cent from the 63.65 per cent national support it secured country-wide in the 2011 local elections to 55.68 per cent in 2016.

The damage was most felt in the ANC’s traditional strongholds of Johannesburg, Tshwane — where the country’s capital city is located — and Nelson Mandela Bay City Metropolitan Municipalities where the party was elbowed out of government by a coalition of the EFF and the DA. This emboldened the opposition, bringing closer to its nostrils, the smell of the blood of an elephant whose sheer strength hitherto frightened all but the foolhardy.

More fundamentally, the 2016 setback effectively rendered the ANC a rural party, shorn of the support of the urban working class and the middle strata whose backing is just as crucial for the party’s efforts to transform the country’s colonial and apartheid social relations. The more reflective sections of the ANC are exercised by the confinement of the ANC to the rural base were it to loose, in particular, the Gauteng province/state — the country’s economic base — in the forthcoming elections. They agonise over the far-reaching and character-altering implications of the ruralisation of the ANC. Such a prospect would negatively affect popular estimation and regard for its standing and relevance as a political institution and radically change South Africa’s political landscape at an ideological and every conceivable practical level.

This would be so because, specifically at the domestic level, the ANC would be substantially denuded of the economic wherewithal to realise society-wide transformation, – the bulk of the revenue at the disposal of the state comes from the urban areas – the ANC’s policies would inevitably and decidedly tilt towards its rural base, thus ceding leadership of the urban working class and the middle strata to whoever would have replaced the party as the political authority in a province/state like Gauteng. On the international front, the ANC’s relations with the rest of the continent would naturally have to change as it would have to be inwardly looking, and in a narrow way at that.

To understand this, dynamic, one needs to appreciate how the ANC got to its current precarious state. The 2009 – 2018 years during which former President Jacob Zuma presided over the leadership of the ANC and the country, produced a party-political moral, intellectual impotence and overall morbidity. This, in turn, manifested in unbridled party division, factionalism, government corruption and ineptitude whose protagonists sought to distract attention by resort to populist sound and fury.

Together with a declining economy, which has, for the most part, not absorbed sufficient numbers of, especially, young people into gainful employment, the confluence of these negatives, and the near-derailment of the transformation project under Zuma’s leadership, unsurprisingly resulted in the lowering of the ANC’s prestige and standing among the masses of the people.

So, by the time of the August 2016 local government election, the disenchantment with the ANC and the personality of Zuma had reached its peak. Thanks to factional feuds within the ANC and the tripartite alliance – constituted of the ANC, the South African Communist Party and the Congress of South African Trade Unions (COSATU) – the latter had its knees before the ruins by 2016, with its General Secretary and one of its largest blue colour affiliates, the National Union of Metalworkers of South Africa, having been expelled in April and November 2015 respectively. Two things thus happened in the 2016 local elections.

The first is that a substantial part of the ANC’s traditional support base simply stayed away while opposition voters swelled the polling stations. The skirmishes within the trade union movement, which were in effect proxy factional ANC battles, also served to denude the ANC’s electoral machinery and, by implication, limited its political reach among its traditional working class support base. The second is that the EFF, a splinter formation from within the ANC, which was established in July 2013 after the April 2012 ill-advised expulsion of its leader and former Zuma staunch supporter turned arch-nemesis, Julius Malema, continued to erode the ANC’s support base.

Partly to settle old scores, protest the ANC’s arrogance and enslavement to a calamitous Zuma, the EFF formed coalition governments with the DA in the key metropolitan cities of Johannesburg, Tshwane and Nelson Mandela Bay.

The December 2017 54th national conference of the ANC at which Cyril Ramaphosa was elected party President reflected, among others, the factional balance of forces within the party and largely represented an equilibrium rather than an outright victory which Ramaphosa and the like-minded would, over time, have to tilt to their favour in the hurly-burly of practical everyday politics.

Since his election – in parliament – as President of the Republic in February last year, Ramaphosa has done relatively well to set the necessary government renewal agenda. However, both the party and the state renewal initiative is and will continue to be contested within the party by those whose interests are served by an ineffectual ANC and government. As we move closer to the elections, the contest is palpable even to the least attentive political observer.

And so, the dread of corruption and the deployment of populist rhetoric and other diversions remain a serious challenge.

The de-politicising effects of populism, especially in a setting of socio-economic inequality with deep racial roots like South Africa, can be devastating for a country emerging from years of destructive leadership. Such is the level of perversion that in some circles, corruption is oftentimes rationalised along racial lines: ‘Why don’t you talk about white apartheid-era corruption and continuing corporate crimes!’ is the retort.
Such populism is potentially more menacing in a South Africa where a privileged racial class milieu – in business, academia and the professions – luxuriates itself, taking quick umbrage at the slightest disturbance of its comfort by denying white racial privilege in a sea of black disadvantage.

Among the wretched of the earth, such populist outlooks engender suspicion. Even a genuinely tendered endorsement of the incumbent political leadership by the privileged classes is viewed suspiciously as nothing more than the natural instincts and bargaining tactics of the advantaged.

Consequently, owing to populism’s simplistic mobilisation of racial and class disaffection, the leadership pays for crimes it has neither committed nor contemplated. The pursuit of strategic openings such as when an epoch facilitates the convergence of differently predisposed social interests becomes impermissible for fear that the loud hailers will act as is their won't.

What then are the ANC’s changes in the forthcoming elections? It is wise to cover behind the angels who would naturally cower to speak in absolute terms. Politics, as with all life, is too dynamic for such determinism.

The electorate is, of course, aware of the ANC’s intraparty contest. Voters will determine whether or not to support the ANC on several potential grounds, including their support for the renewal effort, their confidence in the likelihood of success or failure of the renewal or downright disillusionment with the Zuma years whose imprint, remnants and probability of return albeit under a Zuma-like leader loom large.

Suffice it to say that Ramaphosa has greater appeal to the electorate in contrast to a reputationally-battered Zuma. The ANC is, therefore, more than likely to retain its position as national government, possibly with a slightly reduced majority. The Gauteng province/state remains somewhat precarious though the latest polls suggest that the party will be returned to office.

Mukoni Ratshitanga is a journalist, social and political commentator based in Johannesburg. He is reachable on: [email protected]