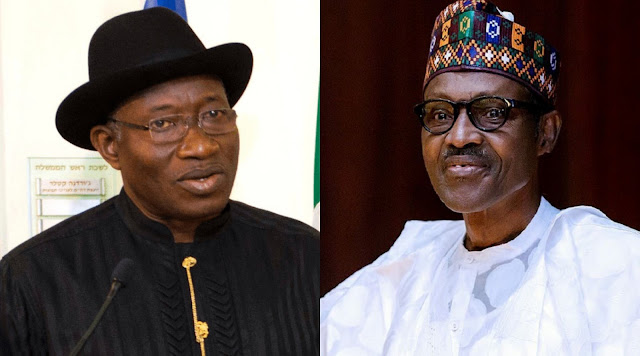 Immediate past President, Goodluck Jonathan has accused President Muhammadu Buhari of setting the nation back as he observed that all indices of development have not made progress since the advent of the present administration.

Speaking at the presidential rally of the opposition Peoples Democratic Party (PDP) in Port Harcourt on Monday, he recalled that he had warned the country in 2015 to choose between going forward and moving backwards.

He said: “All of us know that from May 29, 2015, till date, the number of things that have never happened in this country has been happening. And in 2015, I did mention that the choice before Nigerians was either to move forward or backward. And within these past years, you can attest for yourself. Are we going forward, backward or static?

“All the indices of development be it unemployment, poverty, health status, happiness; everything that is mentioned, none of them that we have made any progress.

“And I believe that you all know that we cannot as a nation continue to stay where we are. And we believe very sincerely that the only person among all those who are interested now that can lead us and get us out of this quagmire that we are is Alhaji Atiku Abubakar.”

The former president told the cheering crowd at the Amiesimaka Stadium that the PDP presidential candidate, Atiku Abubakar, will change the situation of elected as the president.

Jonathan stated: “He will lead Nigeria forward. He will not discriminate against you. He will not have a ratio of 97 % vs 5%. Every part of this country will be treated equally.

“When he was the Vice President to Olusegun Obasanjo, they did very well. They never discriminated against any part of this country. And that is why the country was relatively stable. I believe – and I am sure you all believe – that a vote for Atiku, a vote for PDP is a vote for progress.”

Jonathan praised the people of Rivers state for standing firm with the PDP, praising Governor Nyesom Wike for his numerous achievements in office.

“Rivers State is total for PDP. And there is nobody that can distract us. Rivers State has been a PDP State and we will continue to thank you for your commitment, no matter the challenges for you to be very firm to support the governor and push the agenda of the PDP,” Jonathan stated.

In his remark, Atiku accused President Buhari of inciting Nigerians to violence especially with his speech at his Zamfara presidential rally on Sunday.

The former Vice President said no matter what Buhari may do, Nigerians want to live together.

He stated: “You know what the President said in Zamfara? He said Zamfara people, let us pray for rainfall, let us pray we grow food, let us pray we eat well and then we can make trouble. Is that what a President should say? Buhari I am addressing you. This is a President who is preaching violence and this is not the first time he is doing this in this country. We are not going to allow anybody to make us fight.

“We want peace, we want development, we want prosperity, we want jobs. That is what we want for this country. We are not ready to fight each other again. So, any leader who has come to instigate us to fight each other, we will use the ballot paper to chase them out. So, Buhari must go.”

Atiku remarked that as the apostle of restructuring, he will restore Rivers state and the south south to their pride of place through the revival of ports, creation of jobs and provision of road infrastructure.

“Number three, you see your ports that do not work, do not create job. We will complete them so that we can create thousands of jobs for young men and women in the country.

He also vowed to observe the principles of separation of powers and respect the independence of other branches of government.

Atiku added: “I want to assure you, that I will protect the constitution. No one goes to the court to protect the Nigeria constitution more than me. I go to court to protect our constitution. I will protect separation of powers, I will not interfere with National Assembly, because I believe in checks and balances. I will not interfere with the judiciary, because it is part of our checks and balances. I will uphold the rule of law, I will not allow anyone to trample on the rule of law.”

Also speaking Governor of Sokoto state, Aminu Tambuwal, alleged that President is not in charge of the nation’s affairs but a cabal, saying that Nigerians are therefore waiting to send him packing from Aso Rock.

He said: “From Kano to Kaduna, Zamfara to Sokoto, Katsina to Kebbi, we are all Atikulated and we are only waiting for February 16 to send them packing and ensure that we take our country back from the hands of the cabal.

“The man there is no longer in charge of our country and we are aware of that. We are appealing to you to very vigilant because they are planning to rig the election. Resist rigging, stand by your vote, your vote must count. We must send away prison democracy, what is not working is not good for us.

“This government at the centre is not working, you must change analogue for digital system.”

The National Chairman of the PDP, Uche Secondus, reiterated that President Buhari will be voted out on Saturday having demonstrated lack of awareness of his surrounding.

Secondus stated: “Buhari has no other choice, he is leaving the Villa on the 29th of May, and they are so confused because he is not aware of anything that is going on.

“You have to vote him out. That is the only lesson he can learn so that he can go back to Daura.”

Senate President, Bukola Saraki, who is the Director General of the PDP Presidential Campaign Council, praised Rivers people for coming out in large numbers for the PDP.

He was confident that they will vote en masse for Atiku, Wike and all the party candidates in the elections.