How Taiwo Ogunjobi died at 66 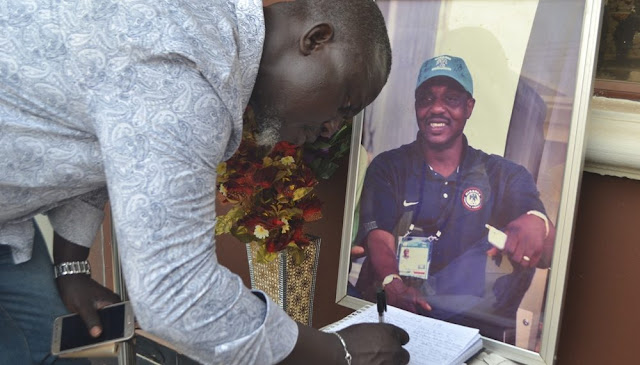 Meanwhile, condolences have been pouring in for the ex-IICC Shooting Stars player who later excelled in football administration after his playing career, with the NFF, Minister of Youth and Sports, Barrister Solomon Dalung; his former club, 3SC paying their respects.

“I cannot find the words as much as I try. A very big tree has fallen in Nigerian Football and we are all devastated. If the NFF had a flag of its own, it would fly at half-mast for several weeks.

“Chief Ogunjobi was one of the strongest pillars of association football in Nigeria and the entire Nigerian Football fraternity will miss him badly. The Members of the NFF Executive Committee, Management, and Staff of the NFF, Members of the Congress, eminent football stakeholders and other workers in football in these shores are in shock,” President of the NFF, Amaju Melvin Pinnick, said on Monday.

In the same vein, Barrister Dalung described the news of the death of Chief Ogunjobi as shocking.
Barrister Dalung in a statement described him as a humble technocrat who dedicated his life to the administration of football in Nigeria.

“I’m shocked to hear of Chief Taiwo Ogunjobi’s death. I saw him last year prior to the NFF elections. He came to personally inform me of his intent to contest the NFF presidential elections.

“He was a seasoned administrator and had contributed immensely to the development of football in Nigeria especially in his home state Osun.

“I commiserate with his immediate family members, the Osun State Football Association and other football stakeholders who knew or worked with him. He has left an indelible mark and a vacuum in football administration in the country. May God grant his soul eternal rest and his family, the fortitude to bear this loss.”

Meanwhile, the Osun State Football Association boss, the management of Shooting Stars Sports Club in a release, made available to newsmen on Monday, said Nigerian football has suffered a colossal loss which will take the country a long time to overcome.

The release, jointly signed by the Chairman of the club, Gbolagade Busari and the General Manager, Rasheed Balogun, expressed surprise and regret over the sad developments.

“We are shocked and saddened by the sudden departure of Chief Ogunjobi.” whose contribution to the Shooting Stars can never be overlooked.

“Skippo, as we used to call him, was a Shooting Stars hero and legend.

How Taiwo Ogunjobi died at 66