Blackmail Will Not Sway Nigerians From The Truth - PDP Blasts APC 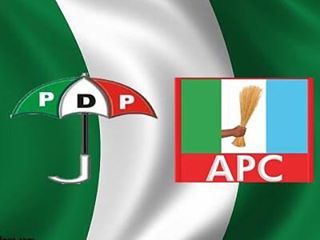 The Peoples Democratic Party (PDP) haw fired at APC letting them know their decision to blackmail and messing with facts will not sway Nigerians from the truth of their culpability in the impasse at the National Assembly.

Via a statement released by the party’s National publicity secretary, Kola Ologbodiyan, they stated that Nigerians are already aware of how the APC has been frustrating the National Assembly.

Nigerians know those who set security agents after the National Assembly members, set parliamentarians against one another and have been chasing lawmakers around the country with tons of money as a bribe, just to illegally change the leadership.

We are not amazed that the APC, in its characteristic shambolic denials, will turn around to point accusing fingers at our repositioned party and members for the situation in the National Assembly, when the echoes of their open threats, tantrums, verbosity and loquaciousness against our legislators are yet to evaporate from the public space.


The APC is pretending not to remember that the Buhari Presidency deliberately kept the Independent National Electoral Commission (INEC) budget submitted to it since February till July when it presented it to the National Assembly and curiously demanded that the fund is wired from the constituency project fund of lawmakers.

Nigerians will recall that as a patriotic and responsible party, the PDP raised the flag and pointed out that bringing the budget in July, at the time the National Assembly was already going on annual vacation, was rather late and asking that the fund be vired from constituency project fund was sinking the INEC budget and the entire 2019 electoral process in a needless controversy. The APC and the Buhari Presidency ignored this wise counselling.

Furthermore, the APC in it deception fails to note that Nigerians are aware that it is President Buhari that is holding the nation to ransom by refusing to sign the Electoral Act Amendment bill, already passed by the National Assembly, just because the amendment checked the machination which APC intends to deploy to rig the 2019 general elections.

Also, since the PDP told its members to rise in defence of democracy and stop the rigging and vote buying of the APC, the ruling party has gone hysterical and making all manners of spurious and diversionary allegations, but it will be instructive for the APC to accept that it has failed Nigerians and the people have resolved to vote them out, come February 2019.

Blackmail Will Not Sway Nigerians From The Truth - PDP Blasts APC