Robot skiers race down snowy slopes at the 2018 Winter Olympics

While Alpine skiers fought high winds at the Pyeongchang Games on Monday, there were no such problems for Robots competing in their own “Olympics” ski challenge.

Robots of all sizes and shapes skied, and in some cases tumbled, down a course at the Welli Hilli ski resort, an hour’s drive west of Pyeongchang.

Eight robotics teams from universities, institutes and a private company competed for a $10,000 prize in the Ski Robot Challenge.

“I heard the Alpine skiing has been postponed again due to wind conditions. That’s a pity,” said Lee Sok-min, a member of the winning TAEKWAN-V team. 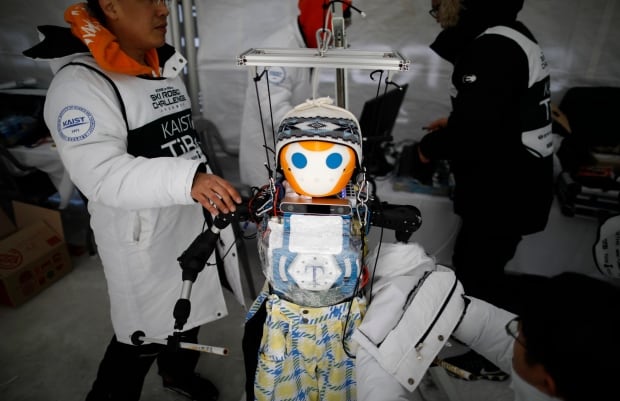 The teams had to meet specific requirements for entering a ski-bot.

It had to be more than 50 centimeters in height, stand on two “legs” with joints resembling knees and elbows, have an independent power system and use skis and poles. 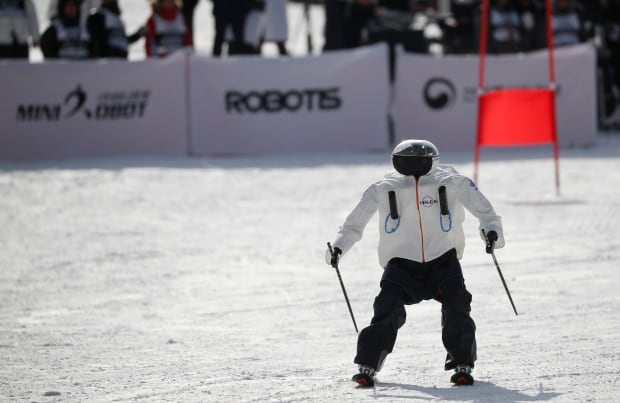 The robots were equipped with camera sensors to detect the red and blue flagpoles in their path and turn as they raced down a beginner’s hill.

“I’m amazed that the robots recognize the flags as they can ski down while avoiding them,” said 12-year-old spectator Son Ki-ryong.

Teams were awarded points for the number of Flagpoles Avoided and the fastest time to the finish line.

Robot Tae Kwon V was the winner. Teams were awarded points for the number of flagpoles avoided and the fastest time to the finish line. (Kim Hong-ji/Reuters).

Organizers said they held the challenge to promote South Korea’s robotic technology during the Olympics.

“I think in the future robots will have their own Winter Games on the sidelines of the Olympics held by humans,” said organizer Kim Dong-uk.

The post Robot Skiers Race down snowy slopes at the 2018 Winter Olympics appeared first on WorldFeed.co.

This post first appeared on WorldFeed.co - Top Tech News, Gear, APPs And Gaming, please read the originial post: here
People also like
What would happen to a modern-day Moses in America?
Nascar Driver Ty Gibbs Punches Sam Mayer After He Cost Him $100K!
New! Kinguin – Tiny Tina’s Wonderlands Chaotic Great Edition EU CD Key
7 Best Straight Razors for a Sharp, Close Shave (Ranked)
Best homebrew games for your A500 Mini
Understand the Gorilla Business Model and Develop a Dark Grocery Delivery App Of Your Own- Have a Look at The insights.

Robot skiers race down snowy slopes at the 2018 Winter Olympics