Technology is allowing researchers in British Columbia to study blooms of Jellyfish and their impact on the ocean in a whole new way.

UBC oceanography professor Brian Hunt and undergraduate student Jessica Schaub have been using drones to get a better picture of the size and composition of clusters of moon jellyfish off B.C.’s central coast.

Images from cameras soaring high above the ocean provide a bird’s-eye view that can’t be replicated on the water, Hunt said. 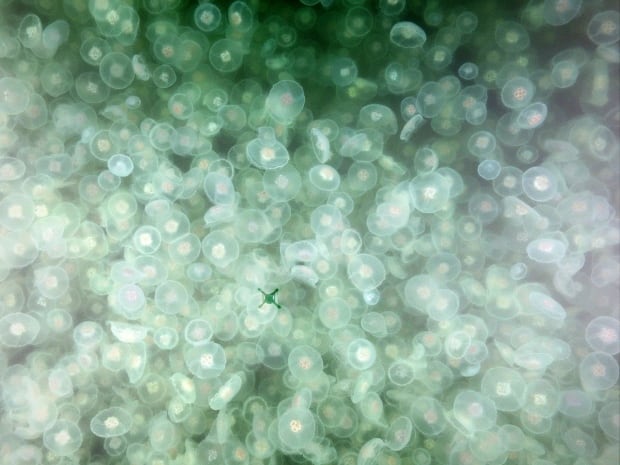 The drone is reflected on the sea as hundreds of jellyfish float beneath the surface. UBC experts say the blooms are becoming more widespread off Canada’s West Coast. (Keith Holmes/Hakai Institute)

“One of the challenges we had with using boats is that, because you’re so low to the water, you don’t really get a good impression of the horizontal spatial expanse of a jellyfish bloom,” he said.

Photos taken by the team’s drone show vast swaths of the gelatinous creatures speckling the ocean, creating cloud-like formations in the water.

Combining data from the drone with information gathered from nets and underwater cameras, Hunt and Schaub were able quantify the masses, determining that the weight of the blooms can vary from 60 to 120 tonnes. 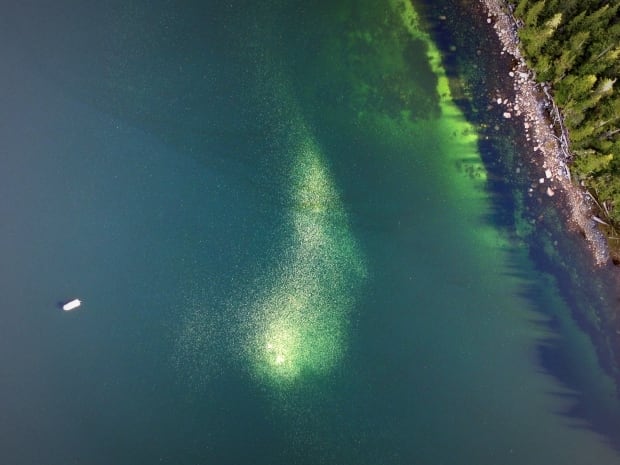 A jellyfish bloom in Pruth Bay, B.C., as seen from a drone cam. Researchers at the University of British Columbia have enlisted the drones to track clusters like these, as well as the fish’s behaviours and populations in greater detail. (Keith Holmes/Hakai Institute)

The number is “enormous” and exceeded the team’s expectations, Hunt said.

He said it’s unclear if the population is growing, because this is the first time scientists have been able to fully study these jellyfish.

Globally, there has been a trend toward an increase in such blooms and there is anecdotal evidence of the same thing happening on the West Coast, Hunt said. 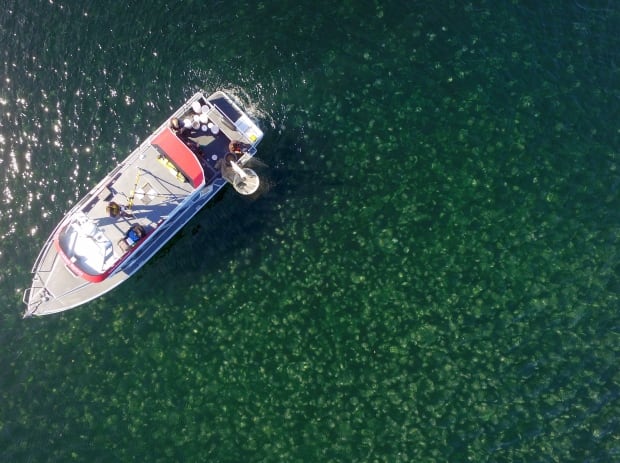 A jellyfish bloom in Pruth Bay, B.C., as seen from a drone cam. Researchers at the University of British Columbia have enlisted the drones to track clusters like these, as well as the fish’s behaviours and populations in greater detail. (Keith Holmes/Hakai Institute)

Accurate measurements could help determine what impact the jellyfish are having on the rest of the ocean.

“With a good estimate of the biomass, we can make better estimates of what type of effect they might be having in the ecosystem through competition and predation,” he said.

Jellyfish feast on a variety of ocean fare, including plankton and juvenile fish. Their appetites make them competitors for and predators of several coastal fish species, including herring and salmon, Hunt said.

He said it’s important to be able to assess the number of jellyfish.

“This can have a really major impact on populations. There can be really high predation mortality on these larval stages of coastal fish species,” Hunt said.

Now the researchers want to add drones to routine monitoring of jellyfish in the area so they can get a better idea of what’s happening to the population and how factors like water temperature are influencing any changes.

How to Organize a Blog Post and Struc…
Top 10 Best Sites Like GoStream To Wa…
GNU: A Heuristic for Bad Cryptography
Just Me and My Depression
Organic Pest Control | 100% Guarante…