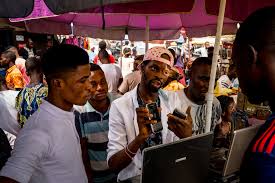 Forcing a smile, Seyi Shay, a music star in Nigeria, stood for hours under the hot lights of a film studio to record a video. Three changes of clothes, two wigs and multiple touch-ups later, she was still at it, singing
snippets of the song over and over.

“More energy,” a producer called out from behind a camera inches from her face.

“How am I supposed to be happy? It’s not a happy song,” Ms. Shay said, sighing into the lens.

Across town, her painstaking efforts to build a following over the years were paying off — for someone else.

At a sewer-side market, dozens of customers lined up with their smartphones and flash drives, eagerly handing over cash to pirates with laptops to load up on Ms. Shay’s songs. She earned nothing from the sales. “Out here, nobody cares about the rules,” Ms. Shay said. “Everything is kind of cowboy.”

Artistes across the world battle illegal sales of their work. But Nigeria’s piracy problem is so ingrained that music thieves worry about rip-offs of their rip-offs, slapping warning labels on pirated CDs to insist that “lending is not allowed.” In Lagos, Africa’s biggest city, legitimate music stores are rare, streaming services haven’t caught on and fans are flocking to markets like Computer Village, with its rows of yellow umbrellas shading young men selling illegal downloads.

Throughout the city, thousands of pirated CDs are churned out each day, and some artistes even pay to appear on them, hoping the exposure will somehow be worth it. But now, members of the country’s music industry are trying to put a stop to all the pilfering, hoping they can finally turn the growing popularity of Nigerian music to their advantage.

Nigerian music — Afrobeats in particular — is having a moment. It blares in hotel lobbies, airport lounges, nightclubs and the dozens of bedroom recording studios where young men and women dream of stardom in this clogged, overheated city. While many countries have courts or jurists focused on intellectual property cases, artistes in Nigeria have only in recent years begun to pursue copyright protection.

They complain that laws to protect them are so seldom invoked that some judges don’t even know they exist. Recording artistes are pressing cellphone companies for more money to use their songs, the Nigerian Government recently announced a new push to protect intellectual property, and the national copyright commission created an institute to train musicians, and judges, about artistes’ rights. “We’re trying to change people’s perception about the use of music,” said Chinedu Chukwuji, chief executive of the Copyright Society of Nigeria. “Music is everywhere, but they don’t know it’s proprietary.”

In Nigeria, musicians have rarely sought royalty payments. Artistes complain that even the nation’s Nollywood film industry routinely uses songs in movies without permission or payment. “When you create your content and put it out, it’s scattered,” said Harrysong, a Nigerian singer known for his hit, “Mandela.” Many musicians pay to have their music heard. Popular music blogs like notjustok.com and naijaloaded.com collect as much as $120 from unknown musicians to promote a single song. Budding musicians also pay to have their songs featured on “latest mix” CDs hawked on the streets.

A collection called “Mega Mix” contained new pirated songs from well-known musicians like Davido and Wizkid, along with songs from 43 less-known singers. The sellers of pirated music know the artistes receive nothing. “To get the songs off the internet, it’s free,” said Ola Mide, who stared into his laptop at Computer Village as customers lined up behind him for songs from local artistes like Tiwa Savage, D’Banj and Ms. Shay. “Then people come to me and give me money for them.”

“What they get from us,” he said, “is popularity.” The Copyright Society of Nigeria has filed lawsuits, staged protests, hosted conferences and handed out fliers to businesses explaining copyright law.
source;Thisdaylive.com