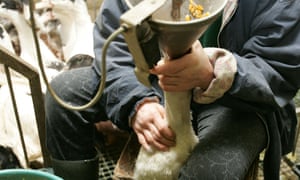 A French farmer holds a funnel to force-feed a duck using the traditional method to produce of foie gras.
Photograph: Regis Duvignau/Reuters

how to improve vision in 7 days
Burrow Has The Perfect Pillow For Eve…
Easy Pet Rocks Craft Idea For Kids
How to Tell if You Have Bed Bugs?
Can You Sue a Title Loan Company?

Foie gras and badger culling would be banned under new animal welfare measures proposed by the Labour party, in a move described by activists as “the beginning of the end of cruel factory farming”.

The practice of force-feeding geese and ducks in order to fatten up their livers is widely considered cruel and inhumane, leading Labour to advocate an end to imports of the delicacy in a new policy document released on Wednesday.

Labour is also proposing further curbs on hunting with dogs, mandatory CCTV in abattoirs, and a ban on the export of live animals for slaughter, under a new animal welfare bill.

As part of the proposals, which the Labour party is now submitting for public consultation until the end of May, a new government commissioner for animal welfare would be appointed to oversee conditions and to take on board evolving scientific evidence as it emerges. Part of the commissioner’s role would be to ensure standards on animal welfare are not eroded as the result of Brexit, as many of the current UK rules derive at least in part from the EU.

Other steps would include designing post-Brexit farm subsidies to move away from intensive factory farming and ending routine preventative use of antibiotics for livestock. The proposals could also give people the right to own pets if they rent homes from unsympathetic landlords.

“Recognising that currently for the majority of people under 30, buying a home is sadly less and less of an affordable option, Labour would seek to improve the rights of renters to own pets that do not cause a nuisance,” the document says.

The 50-point plan would be a comprehensive new approach to animal welfare if Labour came to power, intended to improve conditions for animals in the UK, whether wild, livestock or pets, said Sue Hayman, the Labour party spokeswoman for the environment, food and rural affairs.

The proposals are in part a response to the Brexit negotiations, which Labour fears could lead to lower standards in food production, and to recent revelations on the conditions inside UK slaughterhouses and the expansion of the badger cull.

Some of the proposed measures, such as enshrining the concept of animal sentience in UK law, CCTV in abattoirs and curbs on “puppy farms”, have already been espoused by the government under environment secretary Michael Gove. He has pledged that welfare standards under the EU will be maintained after Brexit.

However, measures such as strengthening the Hunting Act and ending the badger cull are in direct opposition to current government policy.

Hayman said she wanted the proposals to be open to public consultation, with a view to refining and improving them. She stressed that some of the current legislation on animal welfare was down to Labour governments, including the ban on hunting with dogs brought in under Tony Blair, and a tightening of the rules on transporting live animals.

She told the Guardian: “Not many people want to see a country where animal cruelty is tolerated – it is very important that we maintain high animal welfare standards. My biggest concern is that we could have animal welfare undermined by countries [under post-Brexit trade deals] that have lower welfare standards than we have. Farmers have told me this.”

Strengthening the Hunting Act could involve more stringent policing of legal “drag” hunts, a longer period for complaints to be made against hunts suspected of being involved in illegal practices, and tougher sentencing guidelines. Ending the badger cull will be unpopular with many farmers in affected areas, but Hayman said a science-based approach would involve more work on a potential vaccine, and stronger rules on the movement of cattle.

Further potential measures included in the 50 points under discussion include prohibiting the third-party sale of puppies and tackling puppy smuggling, reintroducing rabies testing for puppies before entry into the UK, expanding healthcare for pets for pet owners on low incomes, and allowing tenants greater rights to own pets, in consultation with landlords.

A“blue belt” is also being proposed to protect and enhance the marine environment around the UK and its overseas territories.

The launch is aimed in part in combatting the Conservatives’ decision to concentrate a key plank of their online strategy on the environment, a plan designed by Downing Street and CCHQ, led particularly by the Conservatives’ director of communications Carrie Symonds.

The Conservatives have made a string of environmental and animal welfare announcements over the past few months, including consultations on the banning of puppy farms, legislation against microbeads in cosmetics, a ban on ivory sales and introducing mandatory CCTV into slaughterhouses.

Kath Dalmeny, chief executive of the Sustain charity, which campaigns for better food and farming practices, told the Guardian: “As we start to negotiate new international trade deals, the UK will come under intense pressure to ditch high standards of animal welfare, food safety, and environmental protection, in order to trade with countries with lower standards than our own. Taking back control of our rules must not mean a nasty race to the bottom. We are a nation of animal lovers, so it is welcome news that policymakers such as the Labour party are seeking to put high standards on a more robust legal footing.”

Other charities also welcomed the Labour plans. Emma Slawinski, director of campaigns at Compassion in World Farming, said: “[This] would revolutionise conditions for British farm animals. We particularly welcome commitments to stop live exports, empower consumers with mandatory meat labelling, stop routine preventative use of antibiotics, and use post-Brexit subsidies to move away from intensive factory farming and bad environmental practices. This could be the beginning of the end of cruel factory farming.”

The post Foie gras and badger culling would be banned under Labour proposals appeared first on Shareabler.

This post first appeared on Shareabler, please read the originial post: here
People also like
how to improve vision in 7 days
Burrow Has The Perfect Pillow For Every Person In Your House
Easy Pet Rocks Craft Idea For Kids
How to Tell if You Have Bed Bugs?
Can You Sue a Title Loan Company?
OLLY Goodbye Stress Gummy Review
The Camel Appreciation Society (TCAS)
Worldbuilding for Multiple Alternate Universes Part 5 Why Are There Alternate Universes in Your Reality
“The Friend Who May Not Seem a Friend”: The Cat and the Fire, Part 1 of 3
Alibaba founder Jack Ma resurfaces after nearly 3 months
Emerging Medical Technologies That Will Improve Healthcare
It’s Me – Chapter 14