Hippos are not generally known for their tree-climbing antics, but there was definitely a hippo up this tree. It was a baby, its bottom poking out from a branch, its trotters hanging sadly off the other side. It was quite dead and it had been carried up there by a leopard. No mean feat – it was about the size and shape of a full rucksack and probably a lot heavier.

We didn’t see the acrobatic leopard that day. But the following morning, at 5am, we saw not one, but two. A big male, the colour of pale sand with small black spots, low-slung and heavily muscled, and a female who was trying to engage him in some heavy petting. She was much smaller and daintier, with lovely ombré fur shading from dark amber on top to a pale vanilla belly and with ochre-coloured dots. She was rolling in the dust before him, lashing her white-tipped tail in a wanton display – she clearly hadn’t read The Rules. 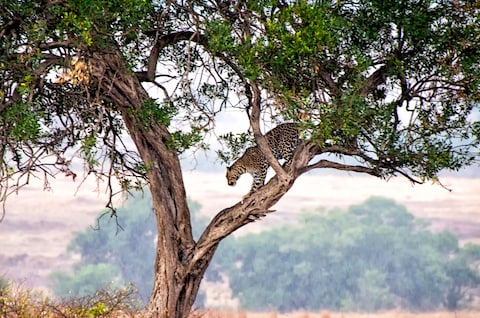 Leopards are solitary creatures, except when the mood strikes

Leopards are solitary creatures, except when the mood strikes, and he was lukewarm at best. He entirely lost interest the minute he spotted a rather gormless mother hippo and her months-old baby wandering around his patch of shrub. He had clearly developed a taste for hippo flesh –hardly surprising, since on land they look like giant cocktail sausages on stumpy little legs. He abandoned the female and trotted after the waddling pair. The baby fell behind and he launched himself at its rear, causing it to squeal in alarm and pain. The mother, with a speed that surprised us, whirled round and snorted angrily at the attacker, who backed swiftly off. After a bit more snorting, mother and baby headed off into the bushes. A short pause, and then along padded the male after them. A moment more, and the female silently followed. Sex, death, fear, love, pain, hunger… all played out in front of our sleep-bleared eyes in a matter of minutes in the Maasai Mara.

We wouldn’t have seen any of it, wouldn’t have had a clue where to look, and would never have thought of scanning the treetops for any lumbering semi-aquatic herbivores, if it hadn’t been for our driver, Nixon, and spotter, Anthony. The 600 square miles of the Maasai Mara are rich in animals, from crocodiles to monitor lizards, from lions to cheetahs and all their prey, bushbuck, waterbuck, reedbuck, wildebeest, Thomson’s gazelles, topi, elands, zebras, buffalo, impala, hartebeests, giraffes, antelopes, duikers, warthogs and more. The plains at dawn can look like the opening scene from The Lion King. But unless you are with someone who knows the animals’ habits and preferences, their moods, methods and routines, you’ll never see, or understand, what is happening in front of your nose.

There was something Shakespearean about the dramas played out in the bushes and plains just by the tented elegance of Sala’s Camp. We were staying there in a bend of the Sand River, overlooking the Tanzanian border. We watched in fascinated horror while three large adolescent lions ate a lone male buffalo they’d brought down not 20 minutes before. If we’d been on foot, they’d have dispatched us in seconds too, but they ignored the jeep that Nixon parked two or three metres from their breakfast and we sat on the roof, not just looking, but smelling and listening too as the lions lolled in delight, licking the flanks of the dead beast with their great lushing tongues, before burying their heads in its belly while great loops of intestine uncoiled around their heads. The buffalo was big and strong and young, but hadn’t been a match for the trio. 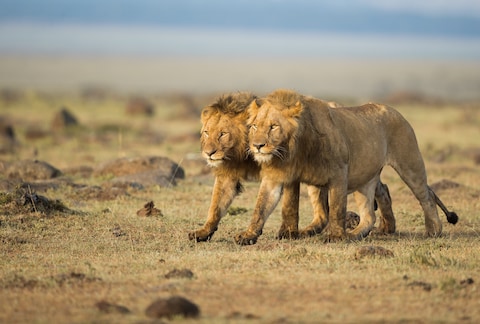 There’s a Game of Thrones complexity to pride politics

There’s a Game of Thrones complexity to pride politics. These three had been expelled from a nearby family for being too big and too dangerous. They had teamed up together and, Nixon assured us, were going to challenge the two dominant lions of the Sala pride any day. If they won, they’d banish the older males and kill any of their cubs they could get their teeth into, before taking over the harem and setting themselves up as tyrants in their turn. We saw the two threatened males later on, solemnly pacing the edge of their territory and urinating richly on any plant or bush that caught their attention. There was a poignant grandeur to the patrol. Perhaps one of their last.

Nixon drove and told us the stories while Anthony, in his crimson Maasai robes, sat on the roof of our modified Toyota jeep, stopping my nine-year-old son falling off the car as it bounced along the dusty tracks. He shaded his eyes from the sun to spot excitement on the horizon. Or, indeed, right by the wheels of the car, where he casually pointed out an olive-green snake – could it be a black mamba? – eating a beautiful butter-coloured songbird head first, while its brethren cheeped angrily above the ugly feast.

Our own meals at Sala’s Camp were just as memorable. One evening, we sat down for dinner on the sand of the dried-up riverbed while tall, lean Maasai tribesmen in red robes swathed in grey blankets against the cool of the evening tended a fire and kept a wary eye on an elephant and her child about 50 feet away. They were having supper too – but theirs wasn’t samosas, veal and mashed potatoes followed by lemon tart on a table laid with spotless linen and candles. 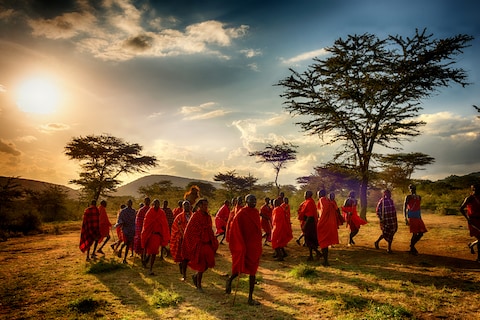 John, one of the Maasai warriors working at Sala’s Camp, armed himself with a spear against leopards and elephants and took us back through the dark to our tent. Though the canvas-walled room, with its wooden floors and free-standing copper bath, large plate-glass windows and outdoor plunge pool, was a long way from any other tent I’ve seen. He left us at the door. When we woke up the next morning, he was still wrapped in his blanket, standing motionless on guard, his back to the tent’s windows, watching the horizon.

Other game drives might keep dozens of tourists corralled in a minibus with the windows shut while a bored spotter points out the odd perfunctory buffalo just off the main road. Not here. There is more than a little old-fashioned adventure to this holiday. Twin-prop planes take you over steeply ridged valleys and hills, scrubby forests and little mud-hut villages to sandy landing strips where you touch down in a flurry of dust to be collected by a man clad either in khaki or in tribal robes and beads, and bounced off across country in a jeep, spotting endangered blue-legged ostriches as you go. On arrival in your camp, you’re quite likely to be offered a pink gin and some cabbage leaves to feed a tame dik-dik (a small deer with a wiggly prehensile nose) before setting off on a camel ride. 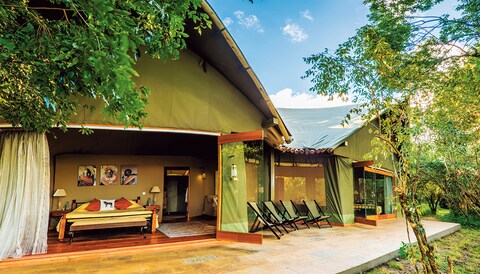 Sala’s Camp is part of the Safari Collection, which has three other Kenyan properties. Solio Lodge specialises in rhino conservancy. Sasaab, on the Northern Frontier, is in the tribelands of the Samburu and offers fascinating glimpses into the lives of its people, as well as helping with their healthcare and education. But its most famous property is the strange, almost surreal, elegance of Giraffe Manor. This is a 1930s Scottish-style hunting lodge built on the outskirts of Nairobi. Its rooms are old-fashioned, with brass telescopes at the windows, long white curtains billowing in the breeze and well-stocked drinks trolleys loaded with scotch, ice melting slowly in silver buckets. There’s boules to play, and croquet on the lawn, chintz armchairs and box hedges. It’s an immensely elegant leftover from Happy Valley days – a little piece of England that doesn’t exist any more at home. 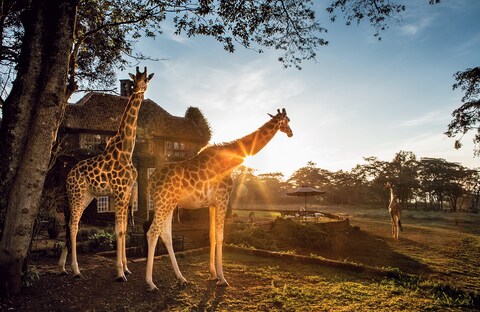 The giraffes at sunrise

But the highlight of the Manor is the inhabitants. There’s a giraffe reserve next door and, when that closes for the day, the endangered Rothschild giraffes it houses saunter over to the Manor’s terrace, accompanied by their faithful warthog companions. Here the Manor’s guests feed the giraffes horse nuts, which they scoop up with their long inky blue tongues. You, meanwhile, have the most civilised of cream teas – finger sandwiches, scones and all – out of Royal Albert bone-china cups. The giraffes will poke their heads through the windows of the restaurant at breakfast time too, in the hopes of a treat as you eat your full English. Their fur feels rough to the touch and their eyelashes are inches long and thick as wire.

It’s the contrast between cosseting luxury and unexpected, intense encounters with the wildest of animals that makes such a holiday so strangely, addictively memorable.

How to do it

Scott Dunn offers a seven-night itinerary in Kenya from £4,100 per person. This includes one night at Giraffe Manor, three nights at Sala’s Camp and three nights at Sasaab. This is based on a family of four travelling on a fully inclusive basis, and includes return international flights and private airport transfers. For more information, visit scottdunn.com or call 020 8682 5070. Read a full review of Giraffe Manor or see our guide to the best hotels in Kenya. 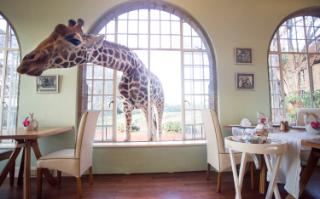 Giraffe Manor is famous for its friendly neighbours – a herd of Rothschild giraffes that delight in sticking their long necks through the windows to be fed treats. Revel in getting up close to these magnificent animals while basking in the comforts of a gorgeous 1930s manor house.

This post first appeared on Shareabler, please read the originial post: here
People also like
Karen Wiesner: I Have Dreamed a Little Dream (Authors and Dream Inspiration), Part 2
20+ Camping Activities For Kids To Eliminate Boredom
My alternative summer: travel writers’ plans for an epic UK adventure
Five Things You Don’t Need To Get Healthy and Stay Fit
Alibaba founder Jack Ma resurfaces after nearly 3 months
Parrot Lovers Shirt
Why the Riddler is such a good villain for The Batman film
Top 10 best places to visit in Lagos state Nigeria
Camp Hox by The Hoxton
Healthcare Recruiter and Candidate Boot Camp: Communication 101
On Death and Subculture