Man transforms his home into sanctuary for 300 abandoned cats

A man has transformed his home into a haven for 300 cats – complete with hammocks, heated perches and roast chicken dinners for the pampered residents.

Chris Arsenault, 58, opened his cat sanctuary to cope with the grief of losing his son and has devoted his life to rescuing and caring for abandoned moggies.

How to Get Rid of Mice – 5 Methods
“The Friend Who May Not Seem a Friend…
New Ways of Working: Adapting to Ever…
Interior Design Ideas for Your Pets
Como agua entre mis dedos: una novela…

The retired train conductor has given his entire house and garden to his feline friends – apart from his small eight by twelve foot bedroom where sleeps and eats.

And he spends his days refilling water bowls, mucking out litter trays, mopping floors and rustling up roast chicken dinners for the pampered residents.

Chris, from Medford, New York, said: “I don’t find it overwhelming even though there are 300 cats now. I truly believe that if you are passionate about something you can handle anything. I really love what I do.

“My house, it’s a big house and there’s a big backyard area. Everything is kitted out for the cats. I designed and build it all myself. For me, safety and hygiene have been a priority.

“I have to be able to clean everything, wash everything down. The floors are vinyl and the walls are covered in plastic sheeting. Outside, it’s all concrete so it is easy to hose it down.

He added: "I have my own space in the house in the boiler room. I’ve built my own bathroom in there, and I have a little area where I have a microwave, a toaster oven and a sink. It’s hard to keep the cats out of there at night, and a few seem to sneak in no matter what I do." 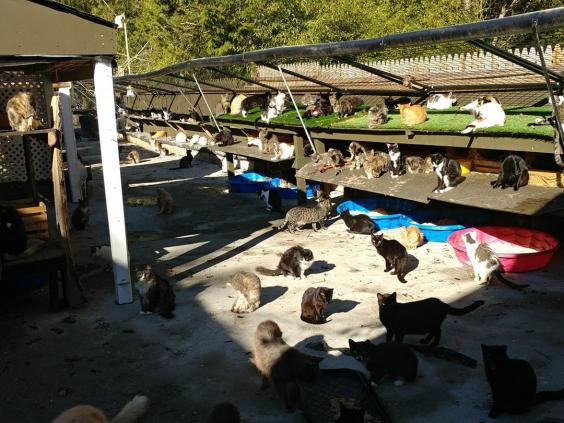 The Happy Cat sanctuary, founded in 2006, is funded out of Chris' pocket as well as donations from the public.

Chris, who gets up at 7am each day to care for the cats, decided to open the sanctuary's doors after he found “a colony” of sick kittens on the side of a railway track.

The discovery came months after losing his son Eric, 24, in a motorcycle accident on Long Island's Cross Island Parkway.

He said: “My son passed away on May 18, 2006, how could you ever forget the day? It changed my life. A couple of months after Eric died, I found a cat colony down by the tracks. I was a train conductor for New Jersey transit at the time.

"There were thirty little kittens and I could tell they were sick. I knew if I left them there they would die so I brought them home with me. I am a real animal lover. When I was a kid, I had rabbits and gerbils and dogs, you name it. Animals have always been my passion.

“After my son died, those cats gave me something to do.” 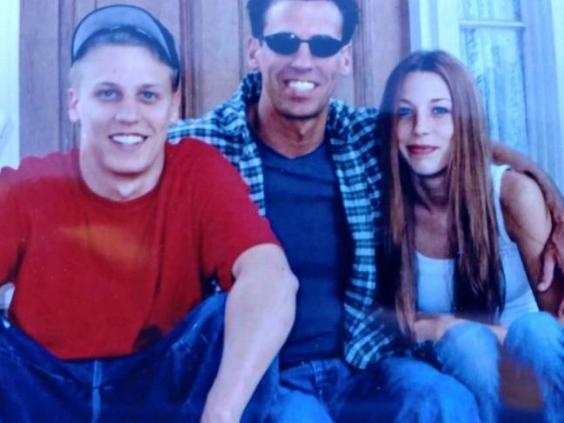 In the years that followed, he contacted local animal charities and shelters and began adopting more and more cats, until the population had swelled to 300.

The sanctuary has a policy to spay and neuter all cats who enter it and Chris seeks veterinary care when he can’t treat ailing animals himself.

He said: "Every day I have to treat the sick cats too. To keep control of this, I use coloured paper collars. Depending on their illness, I treat them with different medications, and if it’s something I can’t fix, I make sure the cat gets to the vet.

"Last year I spent $22,000 on vet bills for the cats. I have every cat that enters the sanctuary neutered or spayed."

Despite the challenges, the father-of-two says he is proud of the sanctuary he's built for cats who would have been euthanised without his efforts.

He added: “When I open my bedroom door, there’s about 50 or 60 cats waiting for me. Most of these cats were abused or abandoned when they came to the sanctuary, so it’s been really a really rewarding thing to be able to give them a home and a place they feel safe.”

The post Man transforms his home into sanctuary for 300 abandoned cats appeared first on Shareabler.

This post first appeared on Shareabler, please read the originial post: here
People also like
How to Get Rid of Mice – 5 Methods
“The Friend Who May Not Seem a Friend” – The Cat and the Fire, Post 2 of 3
New Ways of Working: Adapting to Ever-Changing Realities through Digital Resilience
Interior Design Ideas for Your Pets
Como agua entre mis dedos: una novela romántica con muchísimo humor
Ntokzin – Busisiwe (Album Tracklist)

Man transforms his home into sanctuary for 300 abandoned cats